The BBC has confirmed that Doctor Who will form part of its festive schedule, so, even though an actual airdate hasn’t been announced, we can pretty safely assume the first episode of Series 12 will screen on BBC1 and BBC America on New Year’s Day.

This is backed by rumours of a two-part opening serial apparently due to begin on 1st January 2020 then continuing the following weekend (either 4th or 5th January).

Sadly, the actual details from the BBC are pretty sparse:

Jodie Whittaker and friends are back with a bang! Doctor Who returns very early in 2020 with an epic and thrilling new series full of scares and surprises. The action-packed series will introduce terrifying new monsters alongside the return of some familiar but not so friendly faces…

Jodie Whittaker’s Doctor Who continues to attract a who’s who of acting talent with an exciting group of guest artists set to join the roster for series 12 alongside returning cast members Bradley Walsh, Mandip Gill and Tosin Cole.

That’s not all: the BBC festive schedule also includes Peter Capaldi in Martin’s Close, an adaptation of the M.R. James story by Mark Gatiss, as well as Dracula, by Gatiss and Steven Moffat, who created Sherlock.

There’s also a reboot of Worzel Gummidge, which originally starred Jon Pertwee in the titular role; Not Going Out and Would I Lie To You? starring Lee Mack (Kerblam!), plus David Mitchell (Dinosaurs on a Spaceship) in the latter; the Gavin & Stacey Christmas Special with Joanna Page (The Day of the Doctor) and James Corden (The Lodger; Closing Time); a festive edition of Pointless, hosted by The Sarah Jane Adventures‘ Alexander Armstrong; and The Snail and the Whale, a Julia Donaldson adaptation narrated by Dame Diana Rigg (The Crimson Horror).

And it wouldn’t be Christmas without A Christmas Carol, a new adaptation of which stars Kayvan Novak (Handles in The Time of the Doctor) and Vinette Robinson (42; Rosa).

Yep, it’s beginning to look a lot like Christmas…

Doctor Who Series 12 To Begin … 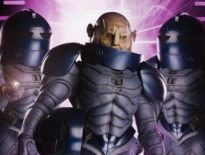 News Meet Sophie Aldred and Christopher Ryan at the Sta… 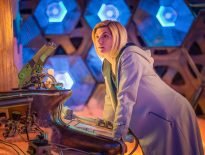