This is Ryan’s first appearance at the convention which has been hosted at the UK seaside town for many years now. Modern Doctor Who fans will recognise him for playing a couple of Sontarans, including in the Series 5 episode, The Pandorica Opens. A special print, limited to just 65, has been made for the event, featuring Christopher as General Staal.

However, Ryan also played Kiv the Mentor in The Trial of a Time Lord: Mindwarp, his mind being transferred into that of Sixth Doctor companion, Peri Brown.

You’ll be able to buy Sil and the Devil Seeds of Arador at the Stars of Time, signed by Sophie Aldred; Ryan’s autograph on the DVD has to be obtained separately.

Though it’s yet to be confirmed, director and producer, Keith Barnfather will reportedly be in attendance too.

You’ll also be able to meet artist, Sophie Iles, whose loveable illustrations can be found on books, prints, and pin badges.

And as usual, there’s a cosplay competition, hosted by the Somerset Cosplayers, so don’t be afraid to dress up!

The Stars of Time takes place at the Tropicana (on the sea front) in Weston-super-Mare on Sunday 1st December 2019. Be aware that the nearest cashpoint is about 15- 20 minutes’ walk away in the town centre so come prepared! 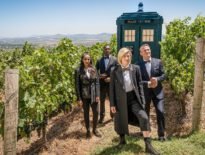 News When Does Doctor Who Series 12 Start? Title and Sc…