Looking for a Christmas present for the Doctor Who fan in your life? There are loads of books on offer, but which non-fiction entries deserve a place on Whovians’ bookshelves? We’ve narrowed down a selection of reference books examining the many worlds of Doctor Who…

Treading the line between fact and fiction…

Join the Doctor for another adventure in the TARDIS alongside her friends Yasmin, Ryan, and Graham!

This amazing annual is packed with:

And facts about the Doctor’s travels, triumphs and enemies!

A festive staple, suitable for children and collectors.

Celebrating one of Doctor Who’s most legendary characters, The Brigadier: Declassified is a collection of articles and essays covering the Brigadier’s storied career.

From 1968 to 1975, Brigadier Alistair Lethbridge-Stewart was a regular feature on Doctor Who. He returned to the show several times through the 1980s and later in the spin-off series, The Sarah Jane Adventures. But his appearances were not limited to the television; he has appeared in comics, novels, audio dramas and even a straight-to-video film!

Join us as we take a look at Nicholas Courtney’s life in Thirteen Objects, explore the concept of parallel worlds with Peter Grehan, refresh your knowledge of Big Finish and the Lethbridge-Stewart range books, learn about the work that goes into bringing the Brigadier to life with artists Adrian Salmon and Colin Howard… and much more!

Also features reviews of every televisual appearance by the Brigadier with Simon A Forward and Glenn Bartlett, and an exclusive interview with the Brigadier’s right-hand man, John Levene!

With a foreword by Terry Molloy.

I Love The Bones of You

Be it as Nicky Hutchinson in Our Friends In The North, Maurice in The A Word, or his reinvention of Doctor Who, one man, in life and death, has accompanied Christopher Eccleston every step of the way – his father Ronnie. In I Love The Bones Of You, Eccleston unveils a vivid portrait of a relationship that has shaped his entire career trajectory, mirroring and defining his own highs and lows, from stage and screen triumph to breakdown, anorexia, self-doubt, and a deep belief in the basic principles of access and equality denied to generations. The actor reveals how his background in Salford, and vision of a person, like millions, denied their true potential, shaped his desire to make drama forever entwined with the marginalised, the oppressed, and the outsider.

Movingly, and in scenes sadly familiar to increasing numbers, Eccleston also describes how the tightening grip of dementia on his father slowly blinded him to his son’s existence, forcing a new and final chapter in their connection, and how ‘Ronnie Ecc’ still walks alongside him today. Told with trademark honesty and openness, I Love The Bones Of Youis a celebration of those on whom the spotlight so rarely shines, as told by a man who found his voice in its glare. A love letter to one man, and a paean to many.

Six Decades of Adventure in Space and Time

Written by the DWC’s very own Frank Danes!

Well written, witty and painstakingly researched, Six Decades of Adventure in Space and Time is an engaging gallop through the history of Doctor Who, from its origins in 1963 to today.  Writer Frank Danes is a prolific author; his previous books include the acclaimed Fifty Years in Time and Space for St Mark’s press.

Six Decades of Adventure in Space and Time is for everyone who likes Doctor Who.  It’s for the die-hard fan and for those who have only just joined the show.  It is the only one-volume history of the programme you will ever need.

All the publisher’s profits are split between two charitable endeavours.  Some will go direct to Bedford Foodbank, who provide emergency food to 600 local adults and children every month.  The rest will help with set-up costs for Bedford Who Charity Con 5 itself:  this is a charity Doctor Who convention, held on Saturday 13th April 2019; all its profits will go direct to Bedford Foodbank.

Order from IM Foreman’s Junkyard and get a signed copy. Check out here to find out how to get a discount!

In About Time, the whole of Doctor Who is examined through the lens of the real-world social and political changes as well as ongoing developments in television production that influenced the series in ways big and small over the course of a generation.

Armed with these guidebooks, readers will be able to cast their minds back to 1975, 1982, 2005 and other years to best appreciate the series’ content and character.

Volume 9 of this series focuses on Series 4 (2008) of the revamped Doctor Who starring David Tennant, as well as the 2009 Specials that finished out his era, with bonus write-ups on Music of the Spheres, the animated adventure Dreamland, and The Sarah Jane Adventures story, The Wedding of Sarah Jane Smith. Essays in this volume include: “Should Doctor Who be Appointment Television?”, “How Can Anyone Know About the Time War?”, and “Why Can’t Anyone Just Die?”

‘What if the big bad Time Lord doesn’t want to admit he’s just afraid of the dark?’

Listen is a pared down episode of Doctor Who that draws on Freudian ideas to bring to life the fear felt by the characters on-screen and the watching viewers.

This Black Archive examines how through its use of the supernatural, the Gothic, the unconscious mind, madness and dystopia, Listen really is the stuff of nightmares.

The Classic Doctor Who DVD Compendium

The release on DVD of the original series of Doctor Who is probably the most comprehensive presentation of a television programme ever produced. Not only are the episodes themselves digitally restored to pristine quality using the best surviving materials and innovative new techniques, but each disc is packed with supplementary features that examine the making, broadcast and legacy of this ground-breaking show. Now every disc, every episode and every extra has been collated and chronicled to guide viewers old and new on their journey through the intriguing history of Doctor Who, all fully indexed for easy reference.

PRINT EDITION NOW UPDATED WITH FULL DETAILS OF THE LAST CLASSIC WHO RELEASE, THE UNDERWATER MENACE.

If you’re only just learning about the show’s past then this book will guide you through the adventure ahead. If you’re still building your collection it will help you discover further stories you’re sure to enjoy. And if you already have every release, then the Classic Doctor Who DVD Compendium is your ultimate companion to the complete range.

AHistory: An Unauthorized History of the Doctor Who Universe (Fourth Editions – Made of 3 Volumes)

The Fourth Edition of AHistory amends and vastly expands (by about 40%) the work of Third Edition, continuing to incorporate the whole of Doctor Who into a single timeline.

All told, this Fourth Edition takes about 2000 (!!!!!) full-length Doctor Who stories and dates them in a single chronology — starting with the Universe’s origins and working its way forward to the end of time. Specifically, this Fourth Edition covers all Doctor Who TV episodes through the end of the twelfth Doctor era starring Peter Capaldi (Twice Upon a Time); all New Series Adventures up through Diamond Dogs; the Big Finish audio range up through Static (#233); all Torchwood, The Sarah Jane Adventures, K9 and Class episodes, novels and comics; the Titan, IDW and Doctor Who Magazine comics; and a cornucopia of other Doctor Who spin-off series (Jago & Litefoot, Counter-Measures and more). Volume 3 (of 3) of AHistory Fourth Edition encompasses the Future History section of the Doctor Who universe — from the start of 2018 to its final, sputtering heat death.

The three volumes of AHistory Fourth Edition contain more than a million words of hardcore geeky analysis on the world’s longest-running Sci-Fi series.

These are, of course, just a few of the more recent releases. Dig into the history of Doctor Who and you’ll find loads of non-fiction titles perfect for loved ones. 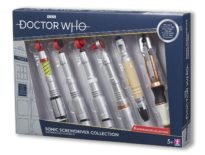 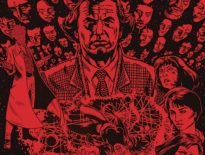