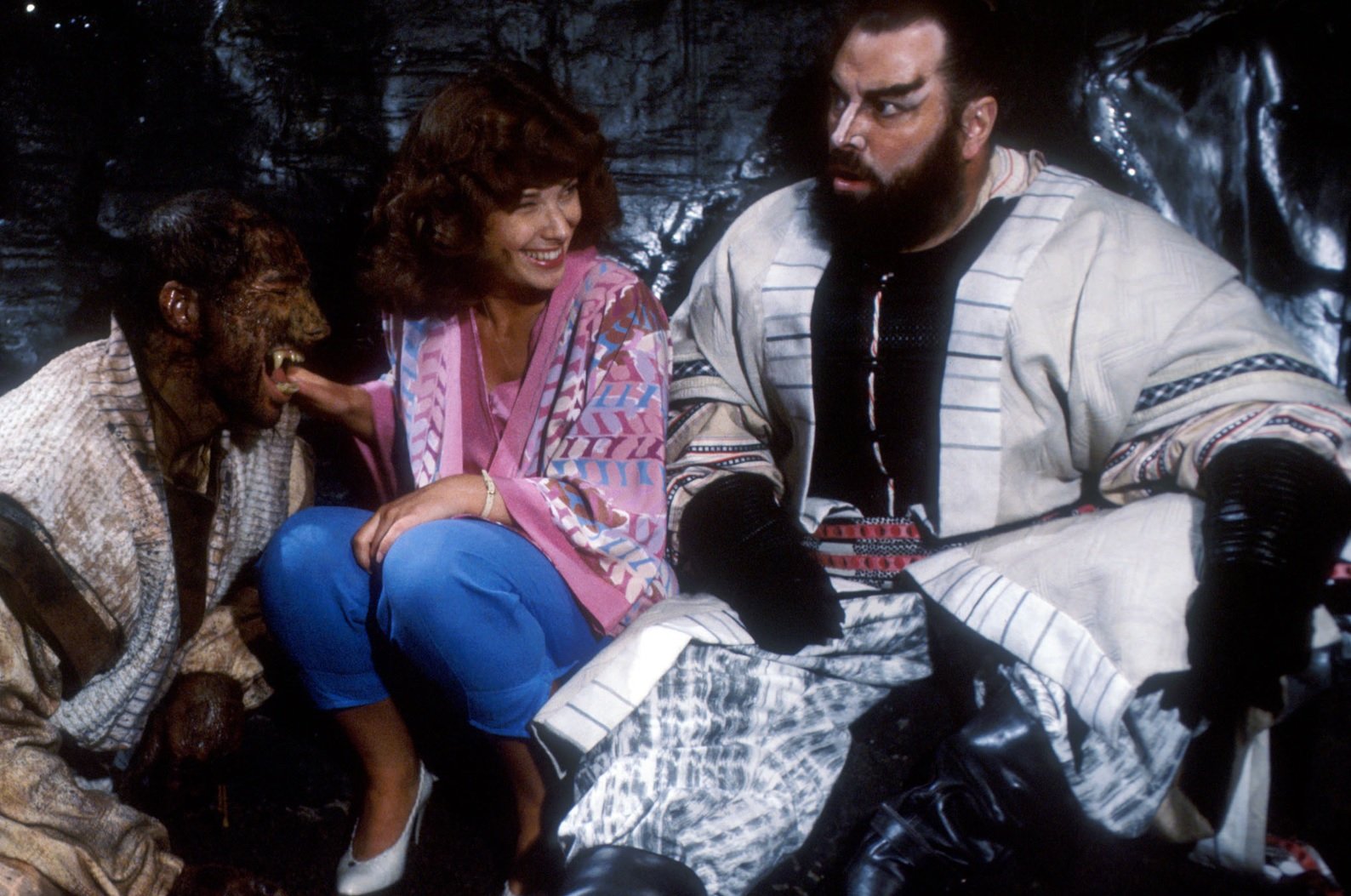 “Long time ago in Thordonia
So the Evil Midu say
Peri’s boy child – Screeterder! –
Was born on Christmas Day…”

“Down Dorf,” bellowed the King of the Krontep, Lord of the Vingten, Conqueror of the Tonkonp Empire, as his once faithful equerry – now transformed into a dog-like mutation – attempted to lick his mighty beard off.

Striding through a door in his citadel was the Krontep warrior King Yrcanos, a Warlord of Thordon, clutching a sackful of presents resplendent in his red-and-white victory robes. “Greetings, Perpugilliam of the Brown, I’m home!”

Yrcanos sniffed the air. A distinct whiff of coconut oil, shea butter, and vitamin E filled the room. This had once been Yrcanos’ private chambers and used to smell satisfyingly like the inside of his unscrubbed breeches. Before being shackled in wedlock, this was his ‘King Cave’, bestrewn with axes, crossbows, gauntlets, chain mail, heretick’s forks, thumbscrews, and other fighting/torture paraphernalia.

The warrior’s spirit dimmed a little as he cast his eye across the now-communal marital chamber. His gaze followed along a line of alien tech, the likes of which Yrcanos had never seen before – Bellybuds, a tens machine, a Hi Bebe Sound Fetal Doppler – all the way to a pink inflatable birthing ball…

Perched atop the orb, gently bouncing, Yrcanos saw his Warrior Queen, Peri. The King could just make out a line of fresh tears across her cheeks, which were filled with a mouthful of pickled gherkins. As she munched, the Queen clutched a huge half-empty jar in one hand while caressing her bulging baby bump with the other. She shot him such a fierce look which nearly blasted the victor of Tonkonp out of his sabatons.

Yrcanos glanced away to escape her stony gaze, staring down at her bare toes. Toes wiggling.

“Where on–” she stopped, cleared her throat, then started again, adopting a distinctly higher register. “Where on Thordon have you been for six weeks, four days, twelve hours, nine minutes and 38 seconds?”

“My lady, I told you I was popping out to have a fight!”

“One fight you said!”

“Well, one fight led to another… and pretty soon it was a full-on battle–”

“How dare you leave me alone in my condition!”

“You had Dorf here to keep you company,’ said Yrcanos, dodging a half-full jar of pickle which smashed against the stone wall behind him.

“That mangy hound! I had to keep spraying his eyes with acid to stop him mounting my thighs,” the Queen screamed.

“Dirty Dorf! I’ll have your doggie danglies for this!” Yrcanos turned and whipped Dorf with a nearby pregnancy support belt. “If it’s any comfort, I vanquished the Vingten hoards.”

“Come now, my lady. You know they need vanquishing every couple of weeks. I plundered their winter rations and brought them as a tribute for you! Because I am a warrior! By the jewelled sword of Krontep! To fight! To kill! To conquer! These are the things I live for! Blood! Pain! Terror! Torture!”

“Well, I’ll have to suffer all that when the contractions start.”

Yrcanos gazed into her eyes and felt something. That thing. When you care for someone or something more than yourself.

“How can I ease your pain, my Queen?’ he asked tenderly in a booming, overbearing holler.

“I’m still mad at you,” she offered a half smile. “But you could start by giving me a trunk massage…”

“Trunk? Are you a Mengalian Mammoth now?”

“I feel like it sometimes,’ replied the Queen in a distinctly deeper tone. Then, returning to her brighter timbre, said, “I meant ‘neck’ not ‘trunk’” She let out an unconvincing gurgling laugh. “Of course, I meant to ask for a neck massage…”

Yrcanos removed his blood-splattered gauntlets and began to oblige, rubbing her tenderly. She closed her eyes and started to relax a little. As cinnamon-scented candles flickered, the King felt the mood soften a little.

“He is not mysterious – he’s an experienced midwife.” At that, Yrcarnos boomed out a guffaw, but she ignored him. “And he’s much better qualified than those knife-happy Samurais that you pass off as surgeons.”

“But, my princess, surgery is cutting people up. Surgeons are just sadists with 14-years of qualifications.”

“None of your quacks have qualifications. That’s why I insist on having my own Doctor.”

Yrcanos steeled himself to ask the question that had been perplexing him for a number of months: “My lady… If he’s such an expert, maybe your Doctor could answer me this: how come my Queen is ‘with child’ when… when we’ve never… you know… done it.. ever?”

“On Thordon we call it… the Rumpy and the Pumpy.” The Queen fixed her eyes shut. “You know, the Hanky and the Panky? The Hokey and the Cokey…?”

The Queen let out a big sigh, pushed the warrior King’s hairy arms away, then swung round to face him. “I have explained,” she said. “That this is what we Earth people call ‘Christmastide’ – that’s today. It’s part of our culture. We mince up pies. We torch puddings. We kill millions of trees, then decorate and display the corpses in our homes.”

“Ooh, I like that tradition. Can we do it with Vingten children?”

“I already said… no! But the main thing that happens at Christmastide is that a chosen woman gives birth to a boy-child.”

“A son and heir! I will pass on my magnificence to another generation!”

At this, Yrcanos leapt to his feet and started to stride purposefully about the room, wielding his cudgel manfully. “Who is this ‘god’ who has defiled my Queen!? Be he body rather than spirit, I will split his spleen, tear out his gizzards, and suck his excretions dry to the very last drop!”

In his rage, the flailing king managed to knock the bouncing girl off balance, sending her crashing to the floor. The Queen let out a reptilian scream as she attempted to claw back from balancing on her bump into an upright position.

Several ranting minutes later, the raging King noticed her piercing cries. “What is is now, dear?”

Clutching her bump, the Queen managed to eek out a few words between deep, agonising breaths. “It’s starting. Oh my God, it’s starting!”

“No, you raving halfwit. The boy-child! The baby is coming!”

At this, Yrcanos ran across the room, drew back the curtains and flung open the windows.

“What the hell are you doing?” screamed the ailing Queen.

“I am making way, so that the flaming winged serpent, Storkx, can enter the chamber clutching the boy-child in its beak,” explained the exasperated warrior. “To deliver the babe.”

“That’s not… that isn’t…. Just go to his chamber and fetch the Doctor. He will know what to do.”

“Should I bring a blood sacrifice for Storkx? He will expect payment!”

“It has to be a creature precious to us, a sacrifice!”

“Maybe I could slay Dorf? That would be acceptable…”

“Get the– Oh, hang on, yes. You could slaughter Dorf on your way past while FETCHING THE DOCTOR!”

Dorf whimpered his last, as the imposing King ran past and splayed him with his cudgel, before running to the door.

A few minutes later, the King burst back into the chamber accompanied by the Doctor, who ran over to kneel down next to the girl.

“How long has this been happening?” he asked, feeling her pulse.

“Ten minutes, no more than that,” she explained. But this time making no attempt to hide her deep, unearthly voice.

“What have you done? I told you to stay upright. This is a totally untested area of genetic science. Any disruption to the experiment could damage the boy-child.”

“Doctor Crozier, don’t you think I know that!” she replied. “This bumbling oaf managed to knock me to the floor.”

“Lord Kiv, you need to be more careful,’ said Crozier. “Your human host’s body has started to die and any sustained injuries may be irreversible. Through this cloned child, you will be able to live on. But I need to transfer your consciousness – so don’t damage the head. Help me with her, Yrcanos!”

A confused Yrcanos assisted Doctor Crozier to position the girl onto the bed. He watched in horror as a slimy, pointed green head started to venture forth from the human’s body.

“What in the name of Midu is this monstrosity!?”

Peri’s body slumped to the floor, her wig slipping off to reveal the bald scalp underneath. Then the creature popped out of her and Crozier deftly caught the little green bundle.

The King of the Krontep, Lord of the Vingten, Conqueror of the Tonkonp Empire who has battled unimaginable beasts on countless planets, fought and won a thousand bloody conflicts, simply can’t believe his eyes… “My queen has given birth to… A SLUG!”

Wrapping the babe in a blanket, Doctor Crozier stood astride the lifeless body of the human once known as Peri. He cradled the newborn creature in his arms before offering it to Yrcanos, declaring, “Merry Christmas!” 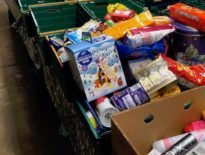 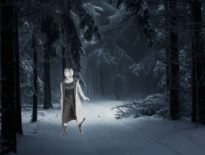