Christmas is here, but did you get what you really wanted? Whatever else we might like, I guess most of us reading this also want excellent Doctor Who, on the screen, as soon as possible. You might think there’s been just one measly hour published this year; the New Year’s Day special, Resolution, about a creature cobbled together from whatever was lying around, animated by entrenched mindset, blind to its deficiencies… and a Dalek. (Oh, come on; it was a gimme).

In fact, this year there have been at least 105 hours of brand new Doctor Who, with great guest stars, skilled and entertaining writers, a whole host of wonderful Doctors and well-established companions, and a soundscape to transport you anywhere, anywhen. Yes, I’m talking about Big Finish. The world of Audio Who thrives whether the screen happens to be showing Who or not. Even if you’ve been on tenterhooks longing for the next season, there’s been plenty to keep the cravings at bay until it arrives.

But beware: Doctor Who is a bit like a Weeping Angel; oddly disconcerting, enigmatic, and you can’t take your eyes off it. Once you let it touch you, your time is not your own. It will steal hours of your life, sending you to another place and time, forcing you to live out your time in a strange tangent to those who’ve never been touched.

Have you ever stopped to count how many hours of your life Who has taken? Is that why you always keep running, never looking back because you dare not? I take some comfort in that while listening to Big Finish productions, one can always do practical things: gardening, housework, creative exercises, physical exercise, or walking the dog. What else do you do with your Who time?

I stopped to count, so in the style of that splendiferous OCD geekfest of a book, Who Graphica, here is a representation of all those weeks, days, and hours of your life you could have had diverted by the Weeping Angel that is Doctor Who.

Note: There are as many approaches to canon as there are bumps on a Dalek, so for the purposes of this article, I’m not counting the Peter Cushing films, Dimensions in Time, Children in Need specials, or Internet minisodes. Just the BBC’s broadcast series and The TV Movie. And in Big Finish, I’m counting the ranges that are specifically Doctor Who, not the ‘Worlds of Doctor Who’ ranges like Torchwood or the Paternoster gang. Big Finish kindly supplied the stats, though they point out that the CDs are not always exactly one hour, but it’s a good approximate figure. Many of their releases include multiple stories and extra behind-the-scenes discs.

But if you’re going to attempt one of those binge-watch sessions James warned us of, those marathon Whofests where the stories melt together like the TARDIS clock in The Edge of Destruction, then how long are you going to have to stay awake?

If you think that’s a lot, take a glance at the time you’d need to devote to Who on Big Finish, from The Sirens of Time to The Best-Laid Plans…

Of course you wouldn’t dream of attempting the whole of Big Finish; the Who ranges, the ‘Worlds of’ such as Jago & Litefoot, UNIT, River Song, and the other ranges – like Blake’s 7, Sapphire and Steel, Terrahawks, Dorian Gray…

If anyone has listened to the whole BF oeuvre, every last minute, they would need a humungous:

So here’s my advice: don’t go at it like a kid in a sweet shop. It’s not, like a sweet shop, aimed at children anyway, but often takes a darker turn. It’s more like a cavernous maze of a wine cellar, under a stately home that used to be a castle, complete with spiral stairs, secret passages, and dusty forgotten treasures. Don’t try to devour lots of Big Finish in a hurry. It won’t go off if you take your time. Unlike screen Who, the picture quality won’t fade, and the special effects won’t date.

So pick a favourite Doctor or companion, and a story featuring a favourite time in Earth history, or Whoniverse mythstory, or a foe that you can’t get enough of.

Big Finish fans, please give your ‘jumping-on point’ recommendations in the comments below. As it’s Christmastime, I recommend The Chimes of Midnight, but Charley Pollard’s unusual relationship with mortality won’t make much sense without Storm Warning first. Here’s a guide from Big Finish’s 20th anniversary celebrations. Or if you want crowd advice, I’ve found the Time Scales helpful; likewise Doc OHO. Here’s a not-bad-at-all starter guide from Digital Spy, though already so many more stories have been released. Lots of these can be heard free on Spotify. What review sites have others used to navigate the vast ocean that is Audio Who?

The figures above apply if you watch everything Only Once. How many times have you watched your favourites – live, repeat, video, DVD, Blu-ray, streamed…?

Time spent travelling with Doctor Who is not ‘stolen’, of course, but willingly given. There are many worse ways of resting bodies while minds explore other worlds and worldviews; there are few addictions less harmful or more positive than Doctor Who, which at least always tries to make people better. And when that Doctor Who Weeping Angel touches people, they end up in places like this, with others whose time has been diverted.

Time makes companions of us all, and I can’t think of anyone I’d rather spend time with.

(With thanks to the Big Finish team.)

Time Diversion: How Long Would… 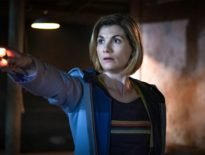 Features What Are Your Hopes for Doctor Who Series 12? Editorial What’s Happening on the Doctor Who Companion…
0