The Jodie Whittaker era’s biggest (positive) claim to fame so far has been world class cinematography. A little extra widescreen beauty to go with the HD we’ve had for the last decade. I mention the cinematography because I feel that in the case of Nikola Tesla’s Night of Terror, pretty much only the title left something to be desired. For once, the rest of the production at least lived up to the cinematography this era is known for.

Admittedly, up until now, when watching the show during the Thirteenth Doctor era, it’s been dicey. I’ve been bitten over and over again. So much so, that viewing the latest episode each week has been accepting the inevitable bad while searching for positives, and preparing for the latest lesson.

The late, great Roger Ebert was once talking about special effects through the decades, comparing the old school stop-motion animation, as in Ray Harryhausen’s fighting skeletons and the original King Kong, to modern day CGI effects. He said that the old stop-motion animation “looked fake but felt real”, while modern CGI “Looks real but feels fake”.

I feel somewhat the same about classic Who vs modern Who but most especially the Chris Chibnall era. The old classic stuff like The Aztecs, with the shoestring budget “looked fake but felt real”; while the Whittaker stuff so far had “looked real but felt fake.”

This week was different. There’s no other way to say it. This was a Doctor Who episode.

Sure, the ‘fam’ didn’t do much and was once again not really needed for anything but the writer of the episode, Nina Metivier at least gave them some lines along with their personalities. Ryan (Tosin Cole) even seemed to know how to act — at the very least, he wasn’t an active moron. Yaz (Mandip Gill) was Yaz. Graham (Bradley Walsh) was his usual delight. But come on folks, Jodie has been making strides lately and I’ll tell you this — she started the journey last year often borrowing from David Tennant but I think she’s finally solidifying her own take on the character. Maybe she’s not there yet but I do reward progress when I see it.

Tesla (played by Goran Visnijic) and Edison (Robert Glenister) are wonderfully realised. If Tesla had an actual investor, it’s a bit mind boggling to think what kind of world we’d be living in today. I’d have to think that somewhere, at some point, someone must have done some kind of story set in an alternate timeline, where Tesla made it and changed the course of history. Ah well. I was actually surprised that some people weren’t aware of Tesla. He is a lesser known individual but considering there’s even a car named after him, I would have thought his profile was a bit higher now.

Most importantly, I appreciated the way history and sci-fi mixed here. This wasn’t the Doctor showing off again (“Hey, I can introduce you to Shakespeare!”). This was a story where you actually learned something interesting you may not have known before, not a case where they bludgeon you over the head about the very well known subject of climate change. I equate Nikola Tesla’s Night of Terror to a more successful attempt than Demons of the Punjab last series. Although Demons hamfistedly wedged unnecessary sci-fi into that story, I was totally unaware of the Partition and really appreciated being educated a bit about it. Same thing here, learning more about Tesla but with an overall better and more well integrated sci-fi product. I’m all in favour of learning if it’s presented properly and not shoved down my throat. Here, I feel it was presented nicely. I credit Nina Metivier, as yes, there was subtlety and nuance here.

The Skithra Queen (Anjli Mohindra, of Sarah Jane Adventures fame) was a nasty piece of work. I liked the scorpion design (even if they just dusted off the Racnoss headware) and all her minions. We’ve been complaining about wanting more danger, bigger stakes, more threats. Here, at least, they did that. And may I just say, even the TARDIS interior looked wonderful in this one. Those crystals look a lot cooler when they’re bright ice blue. It seems like almost every element was better than we’ve usually seen under the Chibs banner.

Complaint department: One thing I’d looked forward to this series was this six episode stretch of non-Chibnall writers giving us their stories. Last week’s Orphan 55 was tainted by the Chibnall effect because of the speeches. This week, with Metivier’s script, I feel his interference was more subtle but there, just the same and Chibs’ lesson of the week seemed to be: “Hey kids, it’s not nice to hurt or shoot at bad guys!”

You’re holding a Silurian blaster and a death-dealing electricity zombie is coming for you, you blast him! Come on, now! If giant, alien scorpions are chasing you, and you have a gun that has been proven effective by the one shot you did get off, keeping shooting! You’d be using every bulletin you had against those things… especially after finding out one bullet is all it takes. Finally, to take out the army of scorpions, you have to kill the queen. So you blast the ship to smitheree—no– it leaves. It doesn’t blow up, it just leaves? To what, come back later? “I won’t lie. I expected more.” Slightly anti-climactic there.

Still, as a package, I think this qualifies as decent Doctor Who. Not earth-shaking, or mind-blowing but as good as we’ve seen from the Whittaker era so far. I’m also going to go out on a limb here and say this is the best we’re likely to get while under Chibnall’s showrunnership. Seriously. Whatever you thought of this episode, I believe a decent story, not written by Chibs, and with only moderate script interference from him, is literally the best we’re going to get. He’s going to get his grubby mitts on every script in some fashion and we’re now about halfway through his era already (probably, if rumours are to be believed). So I think it’s safe to say we’ve seen what he’s got, what he’s capable of, guilty of, and what I think we can reasonably expect for the rest of this ride. 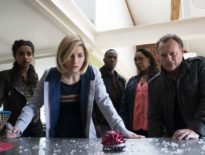 Doctor Who on TV Reviewed Reviewed: Doctor Who – Fugitive of the Judoo… 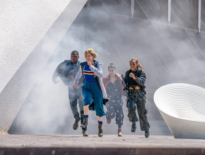 Doctor Who on TV Reviewed Reviewed: Doctor Who — Orphan 55
0