The synopsis for the sixth episode of Doctor Who Series 12, Praxeus, has been revealed… and it looks like the season’s scope widens further, as it takes in Peru, Madagascar, and Hong Kong. The TARDIS team, or “fam” if you must, is split up once more, and I’m sure I’m not the only one getting Spyfall vibes.

Across Peru, Madagascar, and Hong Kong, the Doctor and friends face a deadly global threat.

What connects a missing astronaut in the Indian Ocean, birds behaving strangely in Peru and a US naval officer who washes up on a Madagascan beach?

Here’s who’s who in Praxeus:

“When we come into the episode, the Doctor, Graham, Yaz and Ryan are already split up around the globe, investigating strange goings-on that are linked to a brand-new alien menace.”

McTighe previously wrote Kerblam! for Series 11, as well as the promotional videos for numerous instalments of Blu-ray series, Doctor Who: The Collection. Praxeus, however, is co-wrotten by showrunner, Chris Chibnall, so we might expect some connection to the “Timeless Child” thread hinted at in The Ghost Monument.

And rumours abound that the episode will feature a returning monster too. No, we won’t reveal it, just in case.

News Jodie Whittaker Is Staying on as the Thirteenth Do… 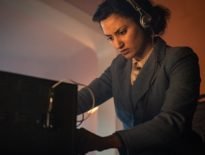