WARNING: Please read every sentence of this review with the words, ‘I think’ in front of them. If you liked Fugitive of the Judoon, then good for you. I didn’t. I thought it was unmitigated rubbish. There. I have given you a precis of my review! Remember, too, that my views don’t represent everyone at the DWC – that’s how opinions work. So:

There was once a programme called Doctor Who. Then it was given to Chris Chibnall, who ruined it.

Things I liked. I liked the shot of the lighthouse from the air. Wales is very pretty, isn’t it? I’ve had some nice holidays there. The views of Gloucester Cathedral are nice and reminded me how much I like cathedrals. There is one in Ely, my home town. At least the Doctor (our Jodie, not the other two Doctors in the episode) mentioned that it was a place of worship, and Doctor Who usually avoids religion except to dismiss it as superstition. The Judoon are great fun and thicko cops are always amusing in drama. Was this drama? It was a series of set pieces pasted together but had a superficial resemblance to drama. There were actors in it speaking words, so, yes, I think you could say it was drama. (Yaz even had a line saying she was a cop and knew how to talk to the Judoon, fellow police! Go Yaz! Go the writing team for remembering that she is a policewoman!) The lead Judoon was first class in point of animatronics – has she had new mechanisms installed? It looked much more impressive than the very, very good space rhino of Smith and Jones of 13 years ago. Perhaps that’s because it is a she and she has had an upgrade. Go Chibs and the positive anti-sexism message! In point of gender and racial politics, you have caught up to about 1985. I liked Doctor Ruth’s TARDIS set – it was a lot better than Jodie’s, which looks more and more like bits of an old Top of the Pops set every episode and not like a believable space at all.

Heck, I quite enjoyed the first 10 minutes of the programme and cheered when Captain Jack appeared.

Then it then all fell apart. Badly. Disastrously. Why do I keep watching? I suppose in the spirit of one who gawps at a terrible accident in the street.

I think Chibs is so incompetent at structuring a story that he doesn’t tell one: instead, he signposts future stories which, I think from experience, tend, when I get to see them, to be as incomprehensible and silly as the episode I am watching at present. He introduces Captain Jack to have him warn us about a future story – “Beware the lone Cyberman” – and to disappear. By golly, that’s how to use a much loved character! Don’t give him a scene with the Doctor, which would be fun, but give him one with the Cardboard Trio instead, and try to keep us watching the rest of this dreary season by the promise of a future fun Jodie-Jack encounter. (But will I be watching by then? It seems unlikely.) Then we have flashbacks or flashforwards or whatever they are to a destroyed Gallifrey, destroyed by the Master, who the Doctor is going to chase but doesn’t get round to doing in this episode. Back to this week’s story, written by Vinay Patel; presumably all the continuity-heavy stuff is by Chibnall at least.

Who is the fugitive of the Judoon anyway? We think it’s Lee, and it seems to be because he has a puzzle box thing, but it isn’t him. It’s Ruth. Isn’t it? Is it? Oh no, she’s the Doctor. I think. Maybe it’s Captain Jack. Maybe it’s the Doctor – our Doctor, Jodie, I mean. Not that she’s the Doctor yet, although she is being given more to do. I am actually so confused and bored by these half-explanations, given half-heartedly by actors going through the motions rather than acting, that I give up trying to understand what’s going on. Is anything going on? I can tell you about that dual time scheme in Othello but this storyline confuses me. Also, I’m so bored and depressed by this funereal parade of slowly paced set pieces that I have stopped caring.

Let’s try again at the start and see what I can make of it.

The episode starts with Ruth greeting the new Monday with optimism and freshness – heck, yes, just as we working people always greet Monday. Me, I always bound out of bed saying, ‘watch out Monday, here I come’. It’s like watching a shampoo advert in point of characterisation. Ruth gives tours of Gloucester but nobody wants them. But is she depressed, worried about her future, downcast, broke? Not she! How can she afford her nice flat? Don’t ask stupid realistic questions. Leave realism at the door.

Ruth has a bloke in the coffee shop who fancies her. He can’t act, bless him, but he isn’t given a character to play so we can understand his predicament. Ooo look: It’s the staple of a funny old lady who can’t act very well. Is she the same one as the one in Orphan 55? This one does some knitting. Is the tangled wool she holds a symbol of the plot? The people of Gloucester are a bit afraid when a platoon of monsters appears in their vicinity and they run about a bit. The old lady takes the appearance of the Judoon in her stride and tells the lead Judoon off. Well, as you would. I am reminded of a story about Lennie Mayne, who berated the cast of The Curse of Peladon for not reacting realistically when Agador was brought into the throne room. “If something like that, some bloody great monster, comes into your room, you say [something like] ‘Holy Cow’!” But the human beings in this version of Doctor Who don’t behave like human beings. They just wander about. Every episode. Pointlessly. Meaninglessly.

Back to the episode. Tosin Cole actually gets worse and worse every week: ‘no way I’m not having that’ he says, holding his arms out to one side to express something when the Doctor tells him off. It says something when the Judoon, an animatronic creature, has more expression and flexibility in its face than a human performer.

Jodie is given a bit more to do as the Doctor and tries to capture Tom Baker’s brooding abstraction in the TARDIS as she contemplates the fall of Gallifrey. The Cardboard Trio sit on the primary school stage rostra that’s in the TARDIS and make comments about her like a chorus in a Greek tragedy. (A tragedy this episode is, for sure.) She is getting there as the Doctor and I think that, after another few years, she might actually be quite passable in the role and will convey most aspects of the character. That is, assuming we then have someone who can actually write to give her Doctor-like things to do.

The bits of the episode which worked were borrowed from other episodes – the Judoon offering compensation; Captain Jack being Captain Jack; a good, proper TARDIS set. I cheered when Captain Jack appeared. I shouted bad words at the Cardboard Trio when they did their hideous ‘We Are Family’ bit at the end. Joss Whedon did the ‘friends as family’ thing over 20 years ago in Buffy the Vampire Slayer and did it so much better with funny, beautifully acted characters who interacted like human beings and with whom we actually did fall in love. Remember all those promises last season that ‘You will fall in love with these characters’? Sorry, Chris, it hasn’t happened yet. Even if you shoved a bloody great Judoon rifle up my nose, (as the Doctor Ruth does in this episode: is she really the Doctor?), I wouldn’t fall in love with Graham, Yaz, or Ryan. I must admit, though, Ryan does provoke a strong emotional response in me, which I encapsulate it short words shouted at the television.

Why does Chibnall cast people who can’t act? Why does he cast two people who can’t act as THE DOCTOR? Are they the Doctor? I am very, very unhappy that the timeline of the programme has been apparently retconned in such a cavalier manner. But it is Chibs’ show, not the viewers’. Then there is a third Doctor! I think. Go Chibs, go! (Actually, go now. Don’t stay for another season. You’ve done enough damage.) Jodie gets back in the TARDIS and the clowns who are her companions – as it has been pointed out, one character whose lines are divided between three people – assure her that they will always be there for her, that they are her mates, they are her Family… How can we care when the characters have no substance? Jodie is reassured and the TARDIS hurtles away to somewhere or other. Ho hum.

I had a conversation with a bloke at work today. I only know him slightly. I asked him if he watched last night’s episode. He said, no, he hasn’t watched any of this season. ‘I loved the Scottish bloke who played the Doctor. Pure adventure, that’s what I like.’ He’s not watching any more. And, from next week, neither am I. 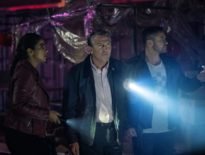 Doctor Who on TV Reviewed Reviewed: Doctor Who – Praxeus

Doctor Who on TV Reviewed Reviewed: Doctor Who – Nikola Tesla’s …
0