I Wanna Go (To Skaro)

Skaro has something of chequered history but for the discerning traveller with an open mind, a sense of adventure and an aversion to the well-beaten path, the seventh galaxy’s most infamous planet and its quite literally colourful locals will make it a trip you almost certainly won’t forget any time soon.
Orbited by three moons, Flidor, Falkus, and Omega Mysterium, the distinct, red-hued planet boasts a desert, mountain range and a northern polar region that was caused when neutron bomb shifted the planet on its axis; and is divided into three separate continents, Dalazar, Darren, and Davius, each with their own unique topographical and cultural features.
Dalazar is perhaps the most hospitable of all the continents, with its sub-tropical climate heating the metallic walls of the famous Dalek city Kaalann or Mensvat Esc-Dalek – where the planets inhabitants go to be assembled under the watchful eye of a Scientist Dalek.
That safe and secure atmosphere extends to the Visualizer Room, where the impressive Librarian Dalek keeps a careful vigil over each and every citizen of this industrious city thanks to an imposing bank of monitors. Then why not take a trip to the Supreme Council Chamber and learn just how democracy was first crushed. 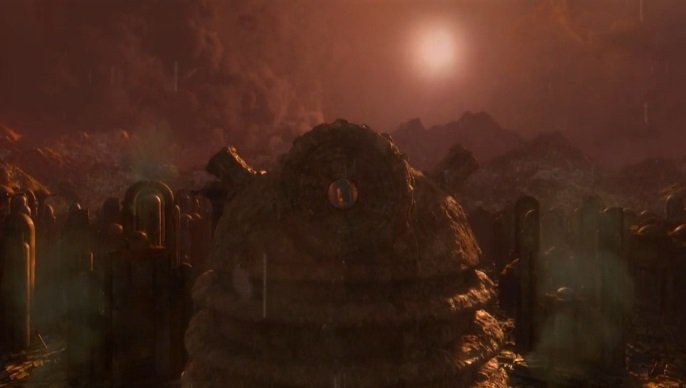 Venture out of the capital, with its enchanting aroma of sulphuric acid and picturesque smog, and you’ll be greeted by the breath-taking sight of the Lake of Mutations.
Historically known as Drammankin Lake, and located near the Drammankin mountain range, which stretches across the entire continent, this irradiated body of water was home to mutations created by the use of chemical and biological weapons during the Thousand Year War – you can feel that history seeping into every pour as you learn the significance of this former anti-missile storage centre and main water supply for the city.
Home to some of the interesting creatures concocted by the forward thinking Dalek Prime, why not take a mini-safari and get up close with the majestic Terrorkon, the enchanting Urvacryl eels, the luminously eyed, multi-tentacle beast known as a Magnedon and, if you’re very lucky, you might just see a rare Monstron! If they haven’t been petrified by lava!
One key local attraction that’s a must for all visitors is the delightful prison colony, a region populated by the mutated descendants of prisoners used in early Dalek neutron weapon tests! Ask nicely and they might lock you in a cell! Be sure they don’t run away and leave you there!
… Because the surrounding Swamp Lands are a vast living organism that engulfs and feeds upon anything coming near its surface. Cross the natural land bridge and you’ll find yourself in Darren, site of the neutron bomb explosion that first liberated the Daleks from their humanoid form. When in the region, might we recommend that you tackle the ‘Radiation Range’, an exciting, challenging range of mountains that have provided the Daleks with enough Cobalt to start their own budding nuclear arsenal!
If you like the open waters, then the third and final continent, Davius – once home of the warrior race turned pacifists, the Thals before they moved to the petrified forests surrounding the Dalek city – will give amateur and professional sailors the chance to stretch their sea legs as they chart a course across its five glorious oceans: The Ocean of Ooze, Sea of Acid, Sea of Rust, Serpent Sea and the land-locked Bottomless Sea.
Why not pop the cork of a fine Kaalann lubricant as you sail majestically past the Island of Moving Mountains, the archipelago known as the Forbidden Islands – known locally as the Islands of Mist – both situated in the charming Ocean of Ooze, and the Island of Gushing Gold located in the blue-collar straits of Sea of Rust.
Just be careful not to smash into ‘The Rocks’ – seriously, be careful; there are stone needles projecting thousands of feet out of the sea and are populated by gigantic flying creatures. When not cowering in terror, listen out for the duel cry of Lallapalange!
Away from the many sights and sounds, why sample some of the local cuisine? Sure there aren’t many restaurants to speak of but nature provides a bounty of delectable flora to feed on. The Varga plants may have been breed as a poisonous sentry for the Dalek city but they go great in a quiche. And you could always boil them in some ocean water and try some Varga tea – once the powerful hallucinogenic takes over you won’t notice your flesh slowly turning a distinctive shade of green.
So if you’re ready for an all new adventure off the beaten path then why not take a chance on Skaro; it could be the best decision you ever make.

I Wanna Go (To Skaro)