Mark Gatiss has revealed that he protested the ‘colour blind’ casting of a black actor as a Victorian Soldier in last Saturday’s Empress of Mars.
Writer Gatiss, who was speaking at Oxford University – with remarks reported by The Telegraph – said he was uneasy about a young black actor, Bayo Gbadamosi, who was cast as a soldier called Vincey, because ‘there weren’t any black soldiers in Victoria’s army’ putting the decision down to the BBC’s drive to make it’s shows ‘more representational and make everything less homogeneously white’. In a difficult email to an unnamed colleague, Gatiss outlined his reasoning.
“This is very difficult email to send, but I don’t think we can do this…these are soldiers from the South African war, they’ve just been fighting the Zulus. There weren’t any black soldiers in Victoria’s army”.
He added:
“But obviously we try all the time to be more representational, and to make everything less homogeneously white.
“But then the argument is ‘It’s Doctor Who’, so everything is already a strange and different world where from the time the show came back, Russell T Davies [showrunner of Doctor Who] is very particular about making sure the show had colour blind casting.”
It was only after he discovered records that show that there was a single black soldier in Victoria’s army, that he accepted the decision.  Gatiss became fascinated with the story of Jimmy Durham, a Sudanese boy who was rescued from the River Nile in 1886 and brought up by soldiers of The Durham Light Infantry regiment. 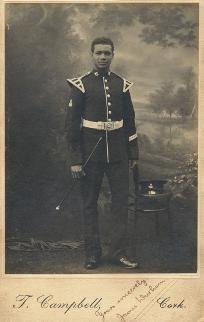 He said:
“I got kind of obsessed with this great story. This boy, when he was 18 years old, was rescued by the Durham Light Infantry. And they made him their mascot – they called him Jimmy Durham.
“And he became what was called a listed officer, by special dispensation of Queen Victoria. He retired to the North East, married a white girl, and his descendants still live there. It’s an amazing story”.
Speaking on the issue of ethnic representation on TV, Gatiss concluded:
“I thought that was a very interesting dilemma, in terms of there are shows where you can be immediately more diverse and so you should be, and also times when it’s slightly more problematic.
“To me it’s more about proper sensitivity rather than any kind of – there’s no one standing over you, you just have to try your best at it”.
A BBC Spokesman commented:
“We cast the best actors for the role”.