The DWC are sad to report that the actor Peter Wyngarde has died aged 90.
Wyngarde, who appear in the 1984 serial Planet of Fire as Timanov the devout religious leader of the planet Sarn, passed away in a London hospital.
His agent, Thomas Bowington, described Wyngarde, who is perhaps most famous for appearing as Jason King, the bestselling novelist turned sleuth who appeared in the British television series Department S and Jason King, as “the most exceptional person I met in my life and a great mentor and teacher.”
Wyngarde’s origins are shrouded in mystery with the actor giving conflicting accounts of both his birthplace and his parents. The most authoritative account lists his birthdate as 1927. He grew up in the far east and during World War II was interned in the Lunghua internment camp in Shanghai, set up by the Japanese for European and American citizens living in the city. 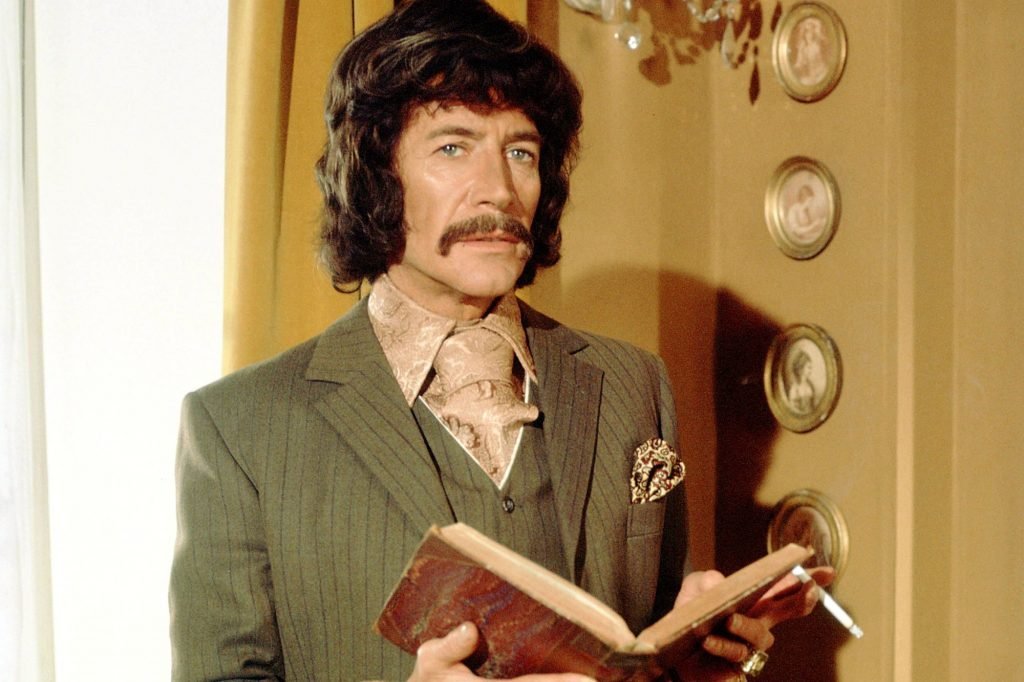 After arriving in the UK aged 18, he briefly studied law and worked in an ad agency before he landed his first professional role in the theatre. One of his earliest roles was a production of Noël Coward’s Present Laughter at the Theatre Royal, Birmingham.
His first television appearance was a bit part in in the 1949 production of Dick Barton Strikes Back. He soon graduated to leading roles playing John the Baptist in the 1956 version of Jesus of Nazareth and Sydney Carton in A Tale of Two Cities.
In 1969 Wyngarde won the role that made him a household name across the globe in the espionage series Department S. He played the suave womaniser Jason King, a character who proved to be so popular that he was spun off into his own series, Jason King, which ran for one season of 26 fifty-minute episodes. During the seventies, he has a succession of smaller roles on television. in 1973 he played the King of Siam in a revival of the musical The King and I at London’s Adelphi Theatre. In 1980 he appeared as the masked character Klytus in the film Flash Gordon.
In 1984 he made his appearance in Doctor Who playing Timanov. He wanted to play the part in heavy disguise but was persuaded by producer John Nathan Turner to show his face.
Wyngarde virtually retired from acting after a throat infection forced his withdrawal from a stage production of The Cabinet of Dr Caligari.
Peter Wyngarde died at the Chelsea and Westminster Hospital in London on 15 January 2018.

by Andrew Reynolds time to read: 2 min
News Clara's Cameo in Twice Upon A Time Was The La…
News Steven Moffat Reveals His Plan For Doctor Who If D…
0
%d bloggers like this: