Why is it that the Sixth Doctor’s era has such a bad reputation in terms of its depiction of violence? After all, Doctor Who has always been a violent programme. In fact, producer Philip Hinchcliffe was famously moved on during the Fourth Doctor’s era due to his and script editor Robert Holmes’ ‘teatime-terror-for-tots’ approach, with successor Graham Williams asked to tone the horror down. Also, as mentioned in my article on Earthshock, script editor and writer Eric Saward had been plying his ‘violence-makes-Doctor-Who-more-realistic’ schtick since the Fifth Doctor’s era.
The first thing to say is that some fans were critical of the violence depicted by Saward and his cohorts during the Fifth Doctor’s era, at least if my sister and her friends were anything to go by. They’d been watching Doctor Who since the early 1970s and were, for example, particularly upset about the scene in Resurrection of the Daleks (from Season 21) where the Fifth Doctor holds Davros at gunpoint.
However, that scene is, fundamentally, no different from the moment in Genesis of the Daleks when the Fourth Doctor is given the opportunity to wipe out the Daleks at the point of their creation. In those two instances, taking action will mean doing something that the Doctor finds morally heinous. In Resurrection of the Daleks, it’s the execution (murder) of Davros and in Genesis of the Daleks, it’s pre-emptive genocide. However, inaction will mean, in both cases, that a Great Evil will live to fight another day. It’s a dilemma that has been played out in other popular franchises such as the Batman comics – for example, in an alternate future, The Dark Knight Returns where Batman pursues the Joker, intending to end the Clown Prince of Crime’s long reign of terror by killing him but then finds himself unable to land the killing blow. Far more problematic for me than that specific scene with Davros are the increasingly levels of gore to be found in Doctor Who during Saward’s tenure as script editor. I noticed this tendency again when I watched Earthshock a few weeks ago (this story was written by Eric Saward, although he was not yet script editor at this point; he took over that post at the end of Peter Davison’s first run of episodes as the Fifth Doctor, which was Season 19). Why, for example, are we shown soldiers’ bubbling remains after they are dispatched by androids in that story? Their torn uniforms and fallen name-badges, as well as the screams that were heard before their demise, are surely enough to let the audience know what has happened. Indeed, the camera lingers over this rather gory image in a ghoulish way that seems inappropriate considering that Doctor Who is supposed to be a family show.
Resurrection of the Daleks, taken as a whole, is worse. I was somewhat dismayed upon showing it to my son a couple of years ago to find that the production team had included several sequences that could have easily come from a video nasty (remember those?). Said sequences involve characters being exposed to a chemical weapon that melts flesh. The worst of these is when two members of the crew attempt to kill Davros before he can be released by the Daleks and the mercenaries working with them. One of those two crew-members is exposed to the weapon and turns to reveal his disfigured face and hands, before being gunned down by his colleague. It’s a mind-boggling scene in terms of its total gratuitousness, especially when you consider that it would have been shown way before the watershed at 9pm.
The thing is, when it comes to depicting actual potentially ‘real’ moments of violence the Doctor Who of this period is shown to be toothless. At the beginning of Resurrection, when Lytton and his mercenaries are seen sub-machine gunning down a whole swathe of extras including an unfortunate tramp, there isn’t a drop of blood in sight (nor would I want there to be; or rather, I think that this kind of over-the-top stuff was best left to the A-Team rather than Doctor Who).
Moreover, Tegan’s denunciation of violence at the end of the story, as she leaves the TARDIS claiming that travelling with the Doctor isn’t fun anymore, is too little, too late for me. It’s a shame, really, as I think there’s a good story in Resurrection trying its best to get out. However, despite all of this, if you were to ask me about problematic depictions of violence in Doctor Who, I would most probably refer to the Sixth Doctor’s era. I think this is mainly to do with the attitude this Doctor displays, particularly during Colin Baker’s first full season. Whereas the Fifth Doctor is a fundamentally peaceful man caught up in a violent world, the Sixth Doctor seems, on occasion, to relish violence. So, as well as more gratuitous moments of gore (for example, Lytton’s hands being crushed in Attack of the Cybermen to bloody effect), we have the Doctor quipping inappropriately as various people are hurt or meet untimely ends.
Let’s ignore The Twin Dilemma. The Sixth Doctor during that story is supposed to be in the midst of a post-regenerative funk, so the fact he attempts to strangle Peri can be put down to that. More to the point, that moment is so egregiously flawed on almost every level that it deserves a whole post of its own.
Let’s move on then to the fact that the Doctor becomes something of a James Bond-character during the Colin Baker-era in terms of the humour he displays. When an anonymous worker inadvertently stumbles into an acid bath during Vengeance on Varos before pulling his colleague who is grappling with the Doctor in too, our hero makes a quip about not joining them. It’s a world away from the Fourth Doctor pondering his moral responsibilities in Genesis of the Daleks or even the Saward-written Fifth Doctor wrestling with an agonising choice over whether to shoot Davros or not. Then there’s Revelation of the Daleks (a story I love despite some absurd elements), in which a stray shot from Bostock costs Davros his hand. After failing in his attempt to use this momentary distraction to escape, the Doctor is prompted to remark that there was, “No ‘arm in trying.”
Violence will probably always be a part of Doctor Who. It is, after all, an action-adventure series and that isn’t a problem. What is important is how the show depicts violence and how the Doctor reacts to it. Doctor Who is at its best, I feel, when even the most timid tot can enjoy it (perhaps from behind the sofa and/or in the company of a supportive grown-up) and the Doctor should be a hero who uses violence only as a last resort and is certainly never seen to relish it. 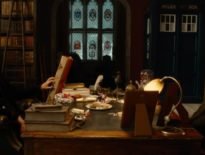 Features What if The Pilot Aired as the 2016 Christmas Spec…
Features Video Nasty? Re-evaulating Vengeance on Varos
0
%d bloggers like this: