Set shortly before Planet of Fire, the penultimate Big Finish Monthly Range release The Blazing Hour feels very much like a sign off to the Fifth Doctor’s era. Which it is, kind of. Since 1999, this range has primarily been where this incarnation has been performed, with over 85 appearances by Peter Davison.

And to fit that end of era feel, everything in The Blazing Hour is pretty bleak. The setting, the set-up; the characters, their interests; the Doctor, the death that follows.

That’s not to say it’s played bleak though, not at all, but the inspiration for this release comes from some dark political realities.

The opening episode has the Doctor and Turlough landing in an empty maternity ward on the planet Testament in the (presumably Great & Bountiful) Human Empire. This is where the empire’s energy needs are met, via a power plant that is as much about providing profits as providing energy.

It’s situated on a world where the local population, the Testamentarians, are treated as inferior to the economically more powerful colonising force that has enabled a nuclear-like manipulation of time to create great outbursts of energy. It’s racism and classism, and it’s another bleak layer to proceedings.

The Doctor and Turlough slide into the tale without too much hassle, despite being at what should be a high-security location, and encounter a tour party. Part of the tour is getting to see the full extent of the security measures though, including the corpse of a saboteur, but none of it goes into too many details because it is protected as intellectual property.

Rather like nuclear disasters on Earth, it’s the layers of bureaucracy and self-interest that mean the people who should see disaster coming don’t – and when they do see it, making an adequate response isn’t their priority – and the first episode ends with an almost inevitable cliffhanger.

Episode Two handles the destructive aftermath, with the Doctor and Turlough split up and in very different predicaments. But at least both are alive, which can’t be said for everyone. While Turlough sees the human costs, the Doctor gets thrusted more and more into the financial costs of disaster, which is what the humans are primarily concerned about. It’s more than reminiscent of The Caves of Androzani.

Ellison, the Testamentarian scientist who prevents the power plant from wiping out the planet in Episode One, and politician Violet Hardaker are the two main characters besides the TARDIS crew and we follow them for much of the story to get contrasting perspectives of the sociopolitical structure of Testament. Humanity is presented as a monster very literally as well as figuratively, but the violence is all administered via the consequences of decisions rather than person-on-person in extreme circumstances, and that feels like an opportunity missed even though this is a Doctor Who story rather than something more adult. But for all the drama that is included, by Episode Three it does need to feel bigger and more grisly to carry the stakes of the impending end of the world, especially as the Doctor basically leaves proceedings entirely at one point.

But the harshness is brought back for that episode’s conclusion, with lives needing to be put at risk in order to save the day. Demonstrating his development as a character during his travels with the Fifth Doctor, it’s Turlough who ends up in this position.

It’s not exactly a straight line from the point of being about to save the day to the day being saved in Episode Four, but after the climax is a very nice resolution that really feeds into this end-of-era feel and provides the Doctor and Turlough a moment together in a story where they are kept mostly apart. All in all, a fitting release for the Doctor who was the very first to have a Monthly Range release to himself.

The Blazing Hour is out now from Big Finish. 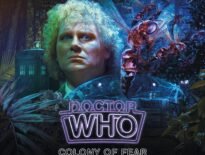