Missing Doctor Who? Give Twin Peaks a try!

Doctor Who is my favourite tv show of all time. I’ve watched the show for so long now that I don’t think anything could dethrone it. But the only show that’s ever gotten close was Twin Peaks. For those who have no idea what Twin Peaks is, let me paint you a picture. It’s 1990, and ABC have put David Lynch, acclaimed surrealist director of movies such as 1977’s Eraserhead, and Mark Frost, frequent writer and story editor for award-winning serial police drama Hill Street Blues, in the same room. What’s the result? Part soap opera, part supernatural horror, part mystery, and part psychological thriller, but altogether something brand spanking new. Spanning two seasons and a film, the story of a quirky FBI agent sent to a small town to investigate the murder of the town’s prom queen changed television.
“But David!” I hear you cry at your computer monitors.
“That sounds interesting and all, but what makes you think I’d like this show just because I like Doctor Who?” A few things actually.
1.) The Main Character
Now don’t let the grim premise fool you. Most of Twin Peaks runtime is spent meeting the wacky residents of the town, and indulging in an obsession with “damn good coffee” and amazing cherry pie. Our gateway into this aspect of the wonderful and strange town of Twin Peaks (even though he doesn’t show up until midway through the feature length pilot), is FBI Special Agent Dale Cooper, played by Kyle MacLachlan. (Who you might remember was briefly considered for the role of The Master in 1996’s Doctor Who. Go figure). 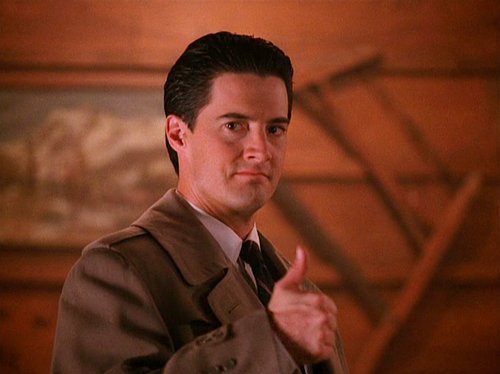 If you know anything about me, it’s that I’m a huge optimist. The hoper of far-flung hopes, the dreamer of improbable dreams, yadda yadda, all that good wholesome stuff. As such, I’m always attracted to optimistic characters in fiction, especially ones who are resolved optimists in the face of terror and evil. Sound familiar?  Dump in another Doctor-ish characteristic of hints of a dark past, and right there is a protagonist up my alley.
Remember that Beautiful Cinnamon Roll Too Good For This World, Too Pure meme that was going around a year or so ago? No? Did I just date myself by referencing a meme? Yes? Well anyway it was popularised in relation to it being attached to a picture of our offbeat but lovable Special Agent… …Moving on.
2.) The Soundtrack
I think it’s fair to assume that many Doctor Who fans appreciate a good tv soundtrack. At times it can be the best part of the show. The exact same can be said for Twin Peaks. The soundtrack in Twin Peaks is so constant and omnipresent that it’s basically a character all of it’s own.
Composed and conducted by frequent David Lynch collaborator Angelo Badalamenti, the soundtrack is one of the most famous soundtracks in television history, and it’s iconic theme is normally the first thing that comes to mind once the show’s mentioned.
Over the course of it’s run the soundtrack, which frequently features dream pop singer Julee Cruise, alternates from bouncy to horrifying to ethereal, creating some of the most atmospheric television I’ve ever seen.
https://www.youtube.com/watch?v=SwvSFOEfHJE
3.) David Warner
Okay this is sorta cheating as he only shows up towards the end of the show, but still, actor crossover! Doctor Who fans know David Warner as Professor Grisenko in 2013’s Cold War, and his Big Finish audio work as the Unbound Doctor.
But look! There is his looking ominous yet stylish in Twin Peaks! That’s cool, eh?
I’m trying my best here, guys. 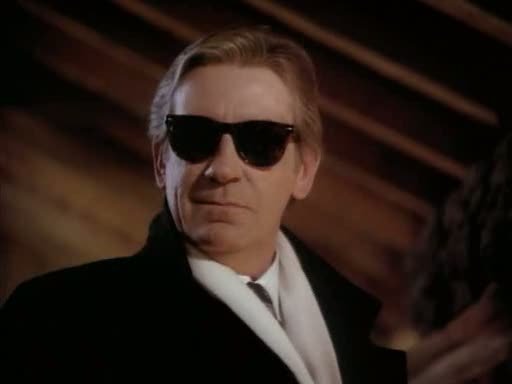 Why else should you check out this classic piece of TV history? Well…
4.) Because it’s not over yet!
Yeah! Believe it or not, the cult show is coming back for a third season in Q2 next year! The majority of the original cast are back to reprise their fan-favourite roles for the new season, including Special Agent Dale Cooper, alongside the original creators David Lynch and Mark Frost.
We don’t know how many episodes we’re getting, but we do know that every single episode will be written by Mark Frost and directed by David Lynch. Only a handful of episodes had that combo over the shows 30 episodes run. How exciting!
So, what d’you think? Did I sell you on Twin Peaks? Will you check it out? Or have you already seen it? If so are you excited for the new season?

Missing Doctor Who? Give Twin Peaks a try!