Assuming the theory that there is an infinite number of parallel universes actually holds water, there is, somewhere in the mists of folded space, a universe in which the TV adaptation of Preacher is as good as the one that is in my head.
Preacher is one of those zeitgeisty things that showed up at the tail end of the last millennium. It is a love story. It is a road trip. It is a philosophical discussion on the nature of free will and the nature of good and evil. It has a few too many knob gags. But it also has a beginning, a middle, and an end – and that end, when it finally occurs in a baptism of fire and blood, packs one of the most satisfying punches to be seen in any comic book collection.
It was also, in its original form, more or less unfilmable.
Not that Hollywood didn’t do its darndest. As early as 1997 or thereabouts, rumours of a big screen adaptation were doing the rounds, starring Ben Affleck as the titular preacher, along with Cameron Diaz and Robert Carlyle, hot from his success in Trainspotting. Most sensationally, Samuel L Jackson was set to fill the boots of the Saint of Killers, in the sort of reverse-race casting that normally causes uproar but which, had the project moved forwards, have probably been widely accepted, given that Jackson was just about the coolest man in the movies back then.


Fast forward five years to the other side of 2000, and the project was set to launch again, this time with James Marsden attached. Marsden, in one of those particularly insightful observations for which he is renowned, described the source material as ‘very dark’. (I was going to say it’s a good thing that he became an actor instead of a critic, but having seen him in X-Men, I’m not really convinced he’s capable of either.) And aside from the occasional flutter of interest and a periodically updated Wikipedia page, that was it. Preacher languished in development hell for almost as long as Ghostbusters III, and we assumed it would never see the light of day.
And all of a sudden, it did. After years in the doldrums, it burst onto American screens and Amazon Prime earlier in the year in the form of a ten-part series starring Dominic Cooper (who, despite possessing a fairly impressive CV, will always be most fondly remembered for climbing onto a jetski singing ABBA songs to Amanda Seyfried). Graham McTavish was cast as the Saint. And perhaps most crucially, Seth Rogen was on board.
Preacher revolves around a jaded, embittered Texan named Jesse Custer, who finds his life reinvigorated with fresh purpose after he is apparently possessed by the infant offspring of an angel and a demon. In the company of gun-toting ex girlfriend, Tulip O’Hare and hedonistic Irish vampire, Cassidy (“Just Cassidy”), Jesse sets out on a quest to find God – who, for various reasons, has abandoned the Kingdom of Heaven and gone on the run. The trio are aided by Jesse’s supernatural ability to command others (a power known only as ‘the Word’), but hindered by serial killers, disgruntled family members, and a mysterious global conspiracy – not to mention the Patron Saint of Violent Deaths, who takes the form of a macabre gunslinger (think a particularly grizzled William Munny) armed with Colt revolvers that never miss their mark.
https://www.youtube.com/watch?v=lq0d0MZcH9o
If you’ve read the comics, you will know where this goes. If you haven’t, I am not about to spoil it for you. Part of the joy behind Preacher is the story – not so much the surprises and twists within the narrative, although there are a few, but more about the highs and lows and ups and downs of Jesse’s quest, wherever it takes him. There are French mountains and sweeping deserts and crocodile-infested swamps, all inhabited by a whole menagerie of colourful characters. Road trips give you that luxury – it’s something you wouldn’t see in Batman, for example, given that the Caped Crusader is typically confined to Gotham, unless he’s sulking in the JLA Watchtower.
American series have a tendency to draw things out almost to snapping point, but it’ll come as something of a surprise to readers of the comic books that Preacher spends its entire inaugural series doing what the comics did within the first four issues. What’s more, it does it by twisting things beyond all recognition. Characters are uprooted from the places you’d expect to find them and given new links with Jesse’s past. Backstories are rewritten. And people who you expect to behave in a certain way suddenly do the complete opposite – incidentally, this applies as much if you’re unfamiliar with the source material as if you know it by heart. 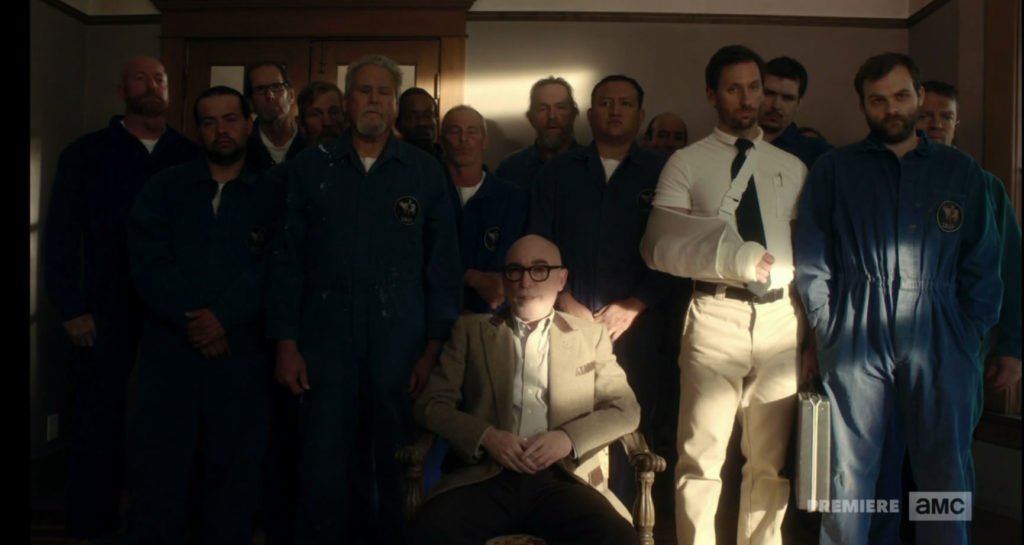 None of it feels like narrative shoehorning, but speaking as someone who was hooked on the comics, changes like this can be disconcerting. You expect Tulip to meet Jesse in a bar, not grow up with him in Annville. It changes the entire dynamic of their relationship. If this sounds elitist, it’s worth bearing in mind that Preacher has only been written once: it’s not like Iron Man, whose origin story may be told a hundred times in a hundred different ways. I spent much of the run-up to the series premiere wrinkling my nose in disgust at the trailers and preview clips. The vibe was off. The dialogue didn’t seem very Ennis. Cooper felt wrong as Jesse, at least in the clips I saw.
But it’s Preacher, and we’ve waited years, and it would have been churlish to turn it down on a hunch. That’s like the guy who threatened to boycott the first Superman movie on the grounds that Clark Kent changed his clothes while descending the side of the Daily Planet building, instead of in a phone box (yes, this actually happened, although don’t ask me to provide a source). This was someone else’s vision for Preacher – reimagined, reinvented, and, as it turned out, absolutely marvellous.
It helps that the whole thing is so wonderfully quirky. The comics are brutal and occasionally dark but never lose their sense of humour: in the show, this manifests via Tulip’s improvised rocket launcher, the dysfunctional staff at the Quincannon meat plant, or Fiore and Deblanc’s ridiculous fight with an angelic assassin. Preacher is the whole package. The score veers between industrial atonalism and Johnny Cash. The lighting is moody and atmospheric, and John Grillo’s cinematography, particularly in the 1882 flashback scenes, is nothing short of brilliant. 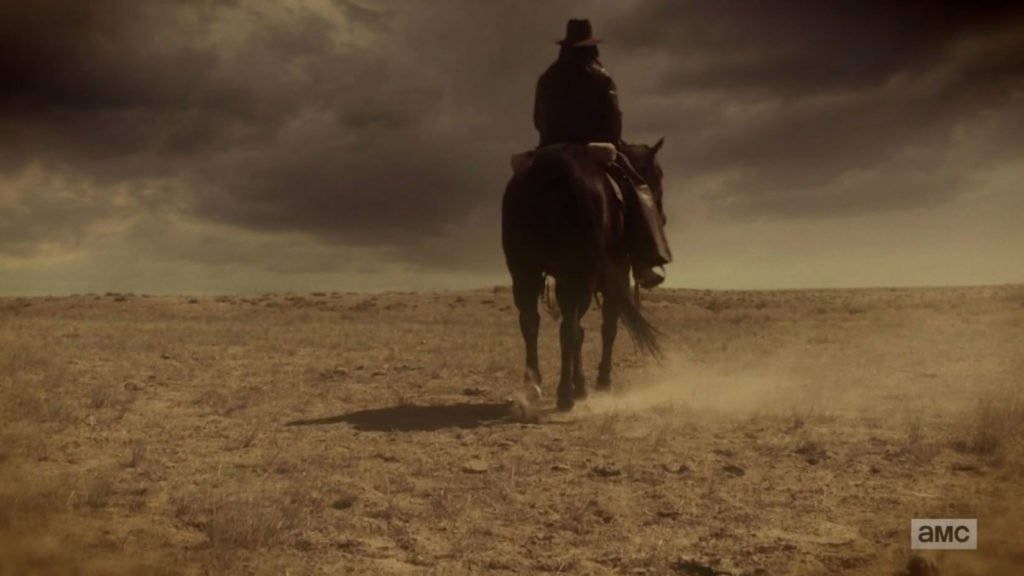 The cast, too, excel – Cooper brings the right sort of arrogant fury to Jesse, Ruth Negga is a wonderful (if very different) Tulip, and Joe Gilgun will have you in fits. Series 1 spends considerably more time exploring the whys and wherefores of Jesse’s ministry than followers of the books might expect, but it allows for a more detailed exploration of Annville and its inhabitants. There are lecherous bus drivers and sado-masichistic housewives. There is a weak-willed mayor and a put-upon, neurotic thirty-something who is henpecked by his mother. There is also a teenage boy with a face like an ar*e.
Then there’s Odin Quincannon, meat mogul extraordinaire and antagonist of sorts – although like all the best villains, his motivation is borne out of a desire to do his own twisted version of good. Quincannon himself is a ruthless but strangely affable businessman, quietly dignified even when he’s bulldozing down the house of an elderly Mexican couple so he can build on their land. He appears to live within a self-inflicted time bubble, at least if the contents of his office are anything to go by: the reasons for this are explored, to a degree, later in the series as his character is fleshed out somewhat. (Those familiar with his portrayal in the comics will hopefully appreciate the pun.)

There will be two types of people who watch this. Those who are new to the whole franchise will wonder what on earth is going on – characters are introduced without a word of explanation, and the series finale raises more questions than answers. Those who have read the books may blanche at some of the changes, but there is no doubt that by the time the credits roll on Episode 10 that this is the Jesse Custer we knew, and as backstories converge and characters prepare to meet for the first time, the touchpaper is well and truly lit. It’s clear that the destination is more or less the same as the one we expected; it’s just that the writers are taking the scenic route.
I’ll confess I don’t watch a whole lot of TV these days. It’s hard to find a series you can latch onto when everything is essentially different but essentially the same. In a world of remakes and reboots, it’s easy to become jaded. But Preacher shows that American TV can still be bold, innovative and fresh. It shows that the unfilmable can work when it’s done properly. Most of all, it stands as proof that a script written by the fans is not necessarily the right one, that a fresh perspective can work better than a tired homage, and – most crucially of all – that those who know the show best do not always know what’s best for the show. 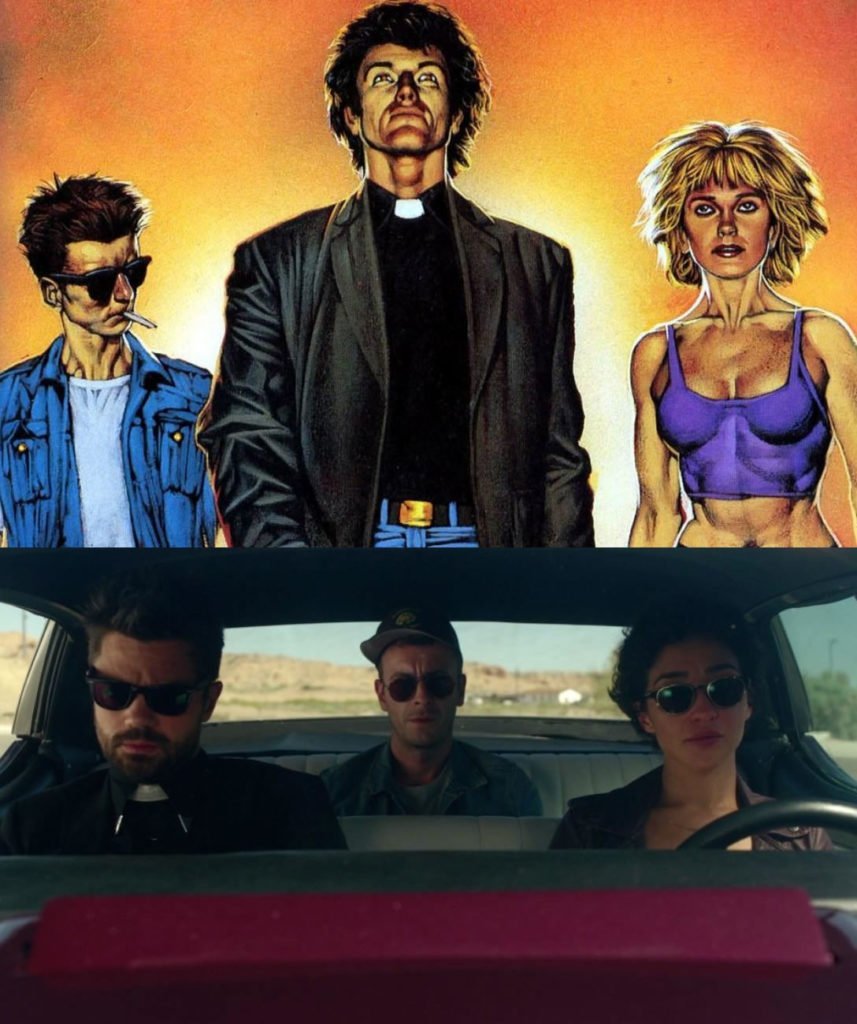 You know, I’m sure there was a comparison I was going to draw there somewhere, but I’m darned if I can remember what it was.

by James Baldock time to read: 6 min
Features If Doctor Who Had A Naughty Little Sister…
Features Why You Should Take A Stroll Into the World of Boa…
6
%d bloggers like this: