Why I Consider Heaven Sent/Hell Bent As A Two-Parter 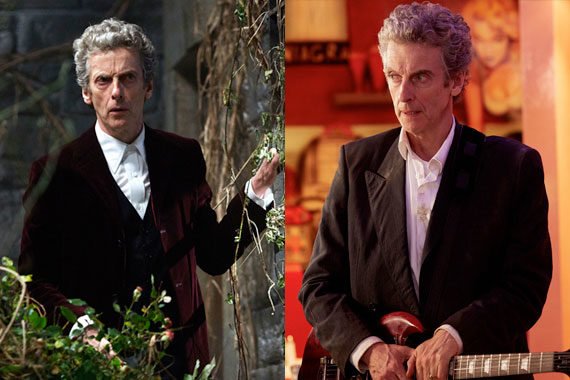 I love two-parters – I really do! They not only expand a regular standard-length episode into an epic, but they also allow more time for the characters and plotting to be developed. But when it comes to the Series 9 stories, there is a significant contrast between their titles and narratives; even for the final two episodes Heaven Sent/Hell Bent, which I perceive as a two-parter.

Despite the fact that both halves were written by Steven Moffat and directed by Rachel Talalay, like the Series 8 finale (Dark Water/Death in Heaven), this was an opportunity to take the concept into a rather unusual direction for the the cast and crew involved, especially Peter Capaldi and Jenna Coleman. Without discussing the story in great spoilerific detail, I will only point out some of the structure elements and New Series conventions to support my argument.

The first half, Heaven Sent, features only the Doctor as the main protagonist, due to Clara’s (shockingly) unexpected death in Face the Raven, whilst the second, Hell Bent, on the other hand, deals with multiple consequences on Gallifrey (last seen in The Day of the Doctor). Before watching the two-part finale, I was highly optimistic about the contrasting elements between the halves and how they were being produced. Unlike all the other multi-part finales, this one has the most unique narrative structure for bringing a series to a close; and from my point of view, this is – and has always intended to be – the Series 9 two-part finale. Even if you consider them as singular episodes, I would suggest that you avoid comparing Hell Bent with the heavily-rushed and anticlimactic Series 6 finale The Wedding of River Song – just not the same.

For many fans (including myself), it was greatly disappointing when DWM had decided to ‘officially’ classify them as single episodes, back in early January. Do they really look like standalones? One may agree, another wouldn’t, or perhaps remain in the grey area of Skaro. The decision came from editor Tom Spilsbury who was working on the Season Survey for DWM 495:

“Controversially (perhaps), we’ve decided not to combine The Girl Who Died and The Woman Who Lived, or Face the Raven, Heaven Sent, and Hell Bent – as despite their linked nature, the individual styles of each episode meant that we couldn’t really consider them as true multi-parters, and we didn’t want to short change readers by forcing you to give a combined score.”

Sounds strange, doesn’t it? I honestly couldn’t disagree more with his explanation, same for when “Steven Moffat [had] agreed” to go ahead with such. Although I would prefer not to judge, I can suggest that they either missed out on reading some of the BBC website updates from 2015 and watched the Doctor Who Extra “specific pairings”, and/or have thought about how the fans would respond to this outcome.

The DWM is one example of a Doctor Who subsidiary that classifies them as two individual episodes; some others (including fansites) would go for the opposite, such as the TARDIS Wiki “officially” referring to them as “stories 260a and 260b”. Even the BBC website confirmed this when they had uploaded the shooting scripts onto their blog, despite both halves being shot in two different production blocks:

“Heaven Sent and Hell Bent were two wildly different episodes. Both unique, bold, and startling they combined to create a two-part adventure – a hybrid, you might say – that brought Series 9 to an unforgettable finale.”

I don’t believe that the BBC will ever change their minds about considering them as a two-parter, same would apply with Talalay’s “spaghetti” experience and Face the Raven writer Sarah Dollard in this interview. This may sound ironic too, but I really like the way Steven Moffat left the episode formatting open for debate in DWM 493:

“Obviously, The Magician’s Apprentice and The Witch’s Familiar are the same story. You could make that one movie. And The Zygon Invasion and The Zygon Inversion. But Heaven Sent and Hell Bent… maybe Face the Raven, too… are they a mini serial? A story split in three, or two? In the end, it doesn’t really matter.”

It is different with both The Girl Who Died and The Woman Who Lived because not only do they feature Ashildr/Me – who later reappears in Face the Raven and Hell Bent – as the primary focus, having three different writers (Moffat co-wrote The Girl Who Died with Jamie Mathieson – though likely just the ending) contrasting the formatting of each episode, along with The Woman Who Lived lacking a ‘Previously’ recap, makes them explicitly appear as singulars; that is what I would consider too. But still, from what I understand, their formatting does differ from what we see in Heaven Sent/Hell Bent where they directly ‘cliffhang’ on the Gallifreyan desert, unlike Face the Raven which concludes in another setting.

And speaking of movies, the Series 9 two-part opener was repeated as an exclusively edited feature-length omnibus, on Sunday, 27 September 2015, BBC One. I believe it doesn’t make much difference if you watch this version or both halves individually, unless you would feel interested in comparing the small edits made between The Magician’s Apprentice/The Witch’s Familiar – try not to count the omnibus as a single episode.

Multi-parters run at a minimum of 90 minutes. Some are much longer. If all the other two-parters (including the finale) were to receive such treatment, they would become Netflix-style epics, but far more superior than the compressed standard-length Series 7 “blockbusters”. I strongly wish for Heaven Sent/Hell Bent to be edited this way because you could then capture the cinematic feel of the unconventional storytelling and the ways it evolved into an extraordinary masterpiece, within two whole hours of bringing Series 9 to an end.

On the same note, I was very disappointed with how they edited the ending of Heaven Sent, which you can read from a complaint that I sent to the BBC (please be aware that I had perceived Face the Raven as the first of a three-parter, at the time of broadcast):

“Unlike Face the Raven (last week’s episode), along with other two-part finales, I felt that both the use of the ‘Next Time’ trailer for Hell Bent and the omission of the ‘To Be Continued’ caption had spoiled the epic cliffhanger ending because this episode is the second of the Series 9 three-part finale, and they should have followed the same method used for The Zygon Invasion, in which its ending had an amount of suspense and thrills that avoided spoiling the surprises for The Zygon Inversion.”

Then after waiting several weeks for a response, here’s what they clarified:

“We contacted the programme makers in order to answer your feedback. They said that they’re sorry you were disappointed by the omission of the TO BE CONTINUED card at the end of this episode, but they felt it was the best dramatic choice not to use it and to go straight into the credits. They never like to tie themselves into strict rules on Doctor Who and they often change their approach to best suit an episode.”

Nevertheless, I was relieved that Hell Bent started off with a ‘Previously’ recap to show that it indeed connects with the first half, along with Face the Raven, because they provide a sense of closure to The Hybrid arc. No one can ignore the story arc of Series 9 – nobody. It’s a clever way to bridge the gap between the earlier episodes and the finale (with its lead-in). And still, that leaves the door open for the fans to interpret how the two-part finale should be perceived.

In the meantime, I hope they’ll do another unconventional two-parter like Heaven Sent/Hell Bent – delivering surprising narrative structures no one will see coming!

Why I Consider Heaven Sent/Hell Bent As A Two-Parter

by Andrew Hsieh time to read: 5 min
Features How Mark Gatiss Found His Mojo
Features Those We Lost in 2016
14
%d bloggers like this: