The Ultimate Question of Douglas Adams, the Universe, and Everything

Travelling across the infinite, unimaginable vastness of space has a number of unexpected pitfalls. The most frustrating being that however mind-bogglingly gargantuan the cosmos appears to be, you often still have to trudge past backwater dives you wouldn’t waste a Zanglian Omni-torpedo to destroy, because you’d have to wipe all the soot out of your missile tube before the tedious business of reloading.
Interstellar travellers in from Bakalastic IV would loudly lament on late night Ultrawireless phone-in shows about the inconvenient necessity of having to slow down to a pitiful 150-times-the-speed-of-light on their way to the fashionable northwestern spiral arm of the Galaxy – where all the best parties with the highest body counts happened.
Their main beef was the 0.00006372 nanoseconds they had to suffer the social awkwardness of being within 3 billion mega miles of the unremarkable little blue-green planet the ape-like descendents who lived there, in their perpetual inanity, still called ‘Earth’. This is despite the unmistakable fact that the oceans cover more than 70% of their land mass. Which is rather like calling ‘a trifle’, ‘a cherry’ because that’s the most obvious thing you see when you first look at it. Then continuing to insist it is merely ‘a cherry’, despite having eaten the small fruit in the first mouthful, then spent the next seven minutes munching away through a huge glass full of cream, ice cream, custard, jelly, sponge, and biscuit base.
Of course ‘Earth’ was the name chosen by Deep Thought, the supercomputer that designed the planet. It was, in fact, a test to see if the humans were able to transcend their programming, generate independent thought, and come up with a slightly-more accurate, or at least a slightly more enticing name for their celestial home. They never did. Despite their protestations, the interplanetary partygoers of Bakalastic IV were fortunate never to have to interact with the inhabitants of the Earth, apart from seeing a small blip the size of a pico-peanut on their 170,000-inch viewscreen, which they installed when they found out their imperious neighbours from Bakalastic V had recently upgraded to 165,000-inch viewscreens. The show-offs.
Fortunate because the humans spent much of their undistinguished existence contemplating why they existed at all, rather than hitching a ride to the party planet Boopa-Loopa-Doopa which was only 237 million light years up the way. And whose inhabitants – by promising friendly wormhole bottomless mojitos – had stretched time so that happy hour on the planet lasted more than the lifespan of a 40,000-foot megashark.
Instead, the ape-descendants after a succession of long, boring and cocktail-free speeches, pamphlets, debates, and games of hangman on scraps of paper when no one was looking, came up with a philosophy which they thought was rather clever and sort-of summed up just about everything: ‘I think therefore I am.’ Which is a bit like concluding, ‘I walk because I have feet.’
The humans, who believed they were happy with this lowest-common-denominator pronouncement on existence, still went about their daily lives with the looming feeling that they’d ‘missed a trick’ and wished they’d asked Descartes to go back to his notes and give it another go.
So humans were content simply ‘to be’. And that state of blissful contentment would last for between 7- and 28-minutes every day depending on how many times they bashed the snooze buttons on their digital clock radios, before deeming that the necessity of being in bed for 7 more minutes was overruled by the necessity of being out of bed and doing something, if not ‘useful’, then at least something ‘else’. 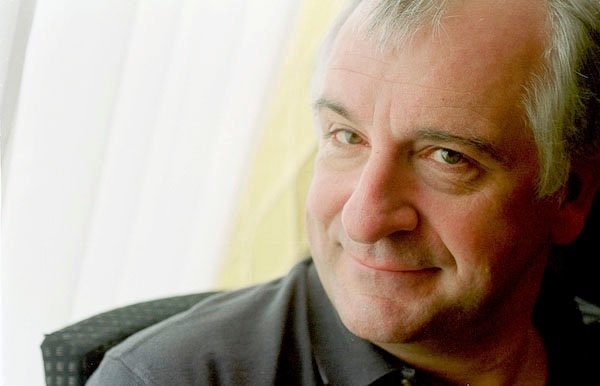 Once awake and making tea, the humans would discover that simply ‘being’ was not enough to fill the 17-hour void before bedtime. So each human, apart from a few notable exceptions, concluded they had to ‘be something’. And there was a myriad of somethings to choose from: a Builder, an Electrician, an Extreme Unicyclist, a Penguinologist, or a Director of Sales at Purplebricks Estate Agents in Kettering.
One such human who felt the overwhelming urge to ‘be something’ was Douglas Noel Adams in the year the humans, despite the fact that the universe had clearly existed for more than 14 billion years, had numbered ‘1971’. Which is about as accurate as answering ‘more than six’ when asked how many grains of sand there are in the Sahara desert.
After 20-years of childhood, then adolescence, Douglas had arrived at a crossroads the humans called becoming ‘grown up’. In fact, Adams had reached the lofty height – in relative human terms – of 6ft 5in. So there was quite a lot of ‘being’ that needed something ‘to be’.
Now there is a common idiom among the Earth-humans that goes like this: ‘Those who can’t do, teach.’ It continues: ‘Those who can’t teach, teach gym.’ Then concludes: ‘Those who can’t do, teach, or teach gym become writers in order to vent their frustrations on all those Smart Alecs who can either do, teach, or teach gym.’ So, with no other option, that’s what the 6ft-5in-20-year-old Adams was compelled to do.
What’s surprising is how many readers draw the frankly unscientific conclusion that Douglas Adams was somehow ‘very good’ at being a writer. Which by any independent assessment is clearly not the case. In his 30-year career as a writer, Adams only managed to write seven-and-a-half novels. Whereas once there was a tedious debate about how to assess the ‘worth’ of a writer – their command of language, their innovation, their capacity for biscuits, their lasting influence, and cultural impact – fortunately the matter was cleared up by Megadodo Publications’ executive order that sets out clearly how to calculate the lasting merit of an author. It states, ‘What you do, right, is when the writer has died or finished writin’ all the bumph they can, take everything they’ve prattled on about for pages and pages and pile it all up. Before it blows away or is set alight by slighted gym teachers, get out a tape measure, and note down the height. Then take away from that number the height of the author and you have a mathematical measure as to if they bees a good writing person or no.’
Using that irrefutable scale, it is clear that despite being declared a ‘genius’ and renowned throughout the Earth as a ‘brilliant writer’, Douglas Adams is in fact a literary nano-bee in comparison to towering authors such as L. Ron Hubbard (5ft 6in, 1,084 books), Barbara Cartland (3ft 2in, 722 books), and Gezenk ‘The Smell’ Jagrunbank (1/4in, 1.8 million books [unpublished due to the electric swamp riots]).
All of which is, of course, irrelevant to the party-seekers of Bakalastic IV, who after two-and-a-half decades on the glactaphone complaining to the nonchalant DJs on the Ultrawireless Magic ’80s Millennium show, simply turned their 170,000-inch viewscreen off in disgust. Which, if the’d held off their anger for 14 more seconds, would have alerted them that the semi-sentient Zanglian Omni-torpedo they’d fired at the Earth had got so affronted being forced to travel 3 billion mega miles to destroy a planet whose inhabitants didn’t have the collective intelligence to notice it had been inaccurately named, had turned back halfway to destroy the Bakalastic IV Party Cruiser instead.
All of which is a clear indication that the unremarkable home planet of the equally unremarkable Douglas Adams is not worth travelling within 3 billion mega miles of, even in the hope of a 35,457-year happy hour offering 2-for-1 on Pan Galactic Gargle Blasters.

The Ultimate Question of Douglas Adams, the Universe, and Everything