Here’s an episode that finally does the job that this reviewer has been waiting for from good old Big Finish Productions, it not only closes the first chapter in the travels of Wren Constance Clarke but serves as a wonderful soft reboot for her character to finally break her free from her tightly wound shackles.
Constance has long been an issue for yours truly as her spikiness and seemingly flippant disinterest in the Doctor’s friendship have proved somewhat dismaying. Whilst it’s interesting on paper to have a character for Old Sixy to romp around the Universe with who is not impressed by him for merely ‘being the Doctor’, the character of Clarke has been irksome to say the least. It may be a fun twist for one story to have a mellowed Sixth Doctor finding it difficult to communicate to a highly strung Constance but the novelty wore off very quickly for this purveyor of fine reviews.

However, Quicksilver serves to bring Constance into the light as a more rounded and fully fledged TARDIS crew member. Oh, there’s plenty going on here in terms of story what with warring alien factions bringing their fight to Earth, the Doctor on a countdown to save the day and lashings of betrayal and post war espionage taking place to pique the interest of the more casual listener, but for long term Big Finishers (you can be called that, it’s okay) this is where Constance truly begins. Imagine the shift in attitude for Donna Noble’s character between The Runaway Bride and Partners in Crime, we’re finally getting someone worthy of the Doctor’s time. A friend, more than just interested in seeing the Universe but in finally seeing the Doctor as well. It’s refreshing, heartwarming and played magnificently by Miranda Raison.
Helping proceedings along to merge two very different audio eras of the Sixth Doctor, is the wonderful Flip, played by Lisa Greenwood. Bestowed with intelligence and innocence at the same time, her appearance here is far more than beautiful happenstance but fundamental to the central plot. You see her entrance coming from quite a way away but the nature of her return to the Doctor’s life is wonderfully witty and perfectly sculpted. Flip also manages to get on very well with Constance when they meet, and boy do they ever meet. In fact their opening scenes together are downright hilarious but have no fear, they end up getting on well. Let’s hope that there’s more to come from these two as a team as they sparkle together, especially when you throw the Doctor into the mix as well. 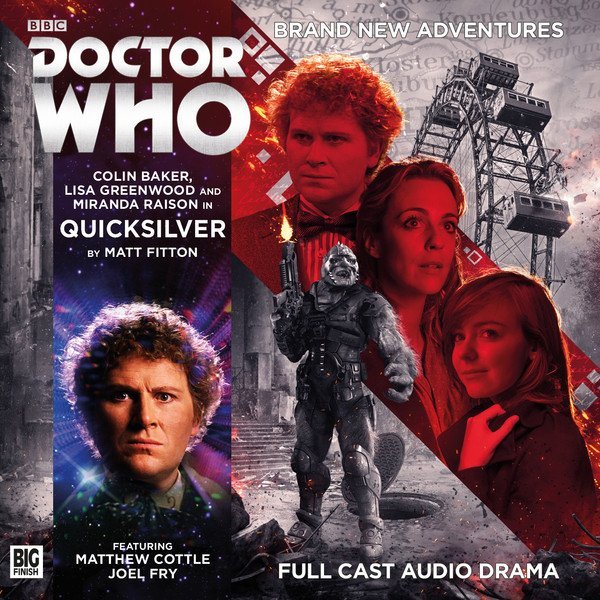 Constance is, however, put through the emotional wringer here but end sup all the better for it by the end of the tale, so much so that once looks forward to her next stories, freed of the shackles of emotional servitude and finally ready to face the universe as she always should have done, with friends by her side and a glint in her eye.
Tying up some loose ends and begins something new and exciting, if Quicksilver is anything to go by, there are good times ahead for the Doctor and the Big Finish range.
Quicksilver is out now from Big Finish, £14.99 on CD or £12.99 as a download.