Pretty much everything you need to know about The Pirate Planet, the new novelisation of Douglas Adams’ Doctor Who serial, is in the excerpts at the start of each part; not the contents of the quotes themselves, but where and who they’re from: William Shakespeare’s Pericles, William Blake’s The Tyger, and Sound of the Underground by Girls Aloud.
No, that’s a lie. You also need to know that it’s superb.
Sticking Douglas’ name on the cover naturally means a lot of pressure for author, James Goss. This Fourth Doctor story was never released as a Target novel, so fans have waited nearly 40 years to see the book on shelves. That’s even more pressure. Fortunately, Goss has risen to the challenge and made something that’ll please fans of Doctor Who and Douglas Adams.
What makes it work is Goss’ natural style, which instantly feels very Adams-esque: it’s witty, whimsical, and full of wonder. Dare I say, it reads more easily than The Hitchhiker’s Guide to the Galaxy, which is a fantastic piece of work, but can nonetheless feel like a bumpy ride due to its narrative structure.
The Pirate Planet, on the other hand, is intricately plotted, so even though it’s bursting with magnificent ideas, the architecture of Doctor Who confines them somewhat, and that makes for a smart, barmy, and memorable story.
If you’re not familiar with the tale, the Fourth Doctor (Tom Baker) and Romana’s (Mary Tamm) search for the second segment of the Key to Time takes them to the planet Calufrax – at least according to the time-space co-ordinates. The TARDIS has landed at exactly the right place at the right time, but bizarrely on the wrong planet. Instead, they’re on Zanak, a world ruled over by the mysterious Captain who periodically announces new golden ages of prosperity: the mines miraculously fill up with sought-after gems and the populace are wealthy once more.

For those who know and love The Pirate Planet, you might be wondering whether this novel can bring anything new to proceedings. I can safely guarantee it does. Firstly, emulating many Target books, the narrative greatly expands many roles: we get into the mind of Mr. Fibuli, for instance, a man under the ever-present threat of imminent death. His dynamic with the Captain is surely one of the most noteworthy double-acts in the show’s history, rivalling Jago and Litefoot, Vaughn and Packer, and those two Brummie Krotons.
Especially pleasing is how the Captain’s backstory is properly explored, and the manner by which the Doctor gleans so much. Oh, I bet you thought the Captain’s insane allusions to Sky Demons, the flaming moons of Heretes, and the Horns of the Prophet Balag were just bluster…
In case you were worried the Captain’s other double-act partner were forgotten about, the Polyphase Avatron gets plenty to do, as does K9: Adams clearly had great plans for the pair which could never have been realised with their 1970s TV budget. The Polyphase Avatron even gets its picture on the back cover, so you can intermittently gaze at it with affection.
The one character who doesn’t get much affection is the Captain’s Nurse, although her supposed role on the Bridge never comes across clearly on-screen. Goss amends this, so she’s a constant presence. 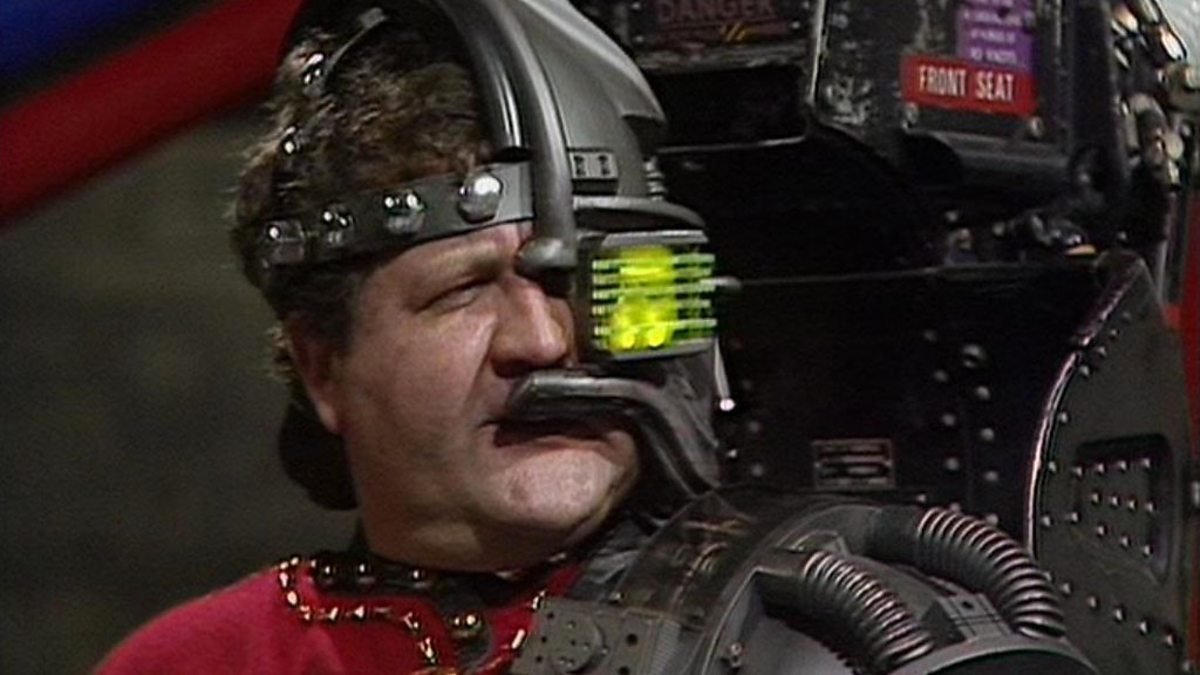 This really isn’t a Target novel, however. Targets were fantastic, but they were also slight books; The Pirate Planet, meanwhile, is 376 pages long (and that’s without all the additional “special features” at its end), allowing it a great deal of depth and a lot of extra details. You might recall the cliffhanger to Part Three is one of Doctor Who‘s greatest: the Doctor is forced off a plank, falling hundreds of miles down to the centre of the planet. Inescapable. The pay-off drives the plot forwards, but you get the feeling that more could’ve been made of it. That’s exactly what Goss does. He adds another layer to the denouement (although, in truth, this goes on slightly longer than it should’ve), but without erasing its on-screen version.
He does similar with the ending, which feels quite messy on TV. It’s smoothed out, comeuppances are justly dished out, making for a very pleasing conclusion.
Ah yes, the special features – some 30 pages exploring the behind-the-scenes of The Pirate Planet, both the TV version and this mighty tome. As James states at the book’s opening, “This novelisation is based on the first draft scripts by Douglas Adams. So it probably isn’t what you’re expecting.” It’s not simply a retelling of the same tale: if anything, it feels more authentically Adams-esque. This is a conglomeration of its various iterations, arguably forming a definitive incarnation.
The immense work that Goss has put into it is partially documented in an Afterword, detailing his trip to the Douglas Adams Archive at St. John’s College, Cambridge, plus comparisons of the first draft, rehearsal script, and finished version. You can then pore over Adams’ musings on how to develop the plot, including bits that would carve out a new history for the show (“if [the villain] is the Master’s daughter, she is collecting the planets which witnessed his defeat. Because she loved him… or hated him?”), plus the Time Lady Gravity (or “X” or “Komnor”, a precursor to Romana), a new TARDIS control room (this notion is hinted at within the novelisation, and would’ve been wonderful), and the other segments of the Key to Time. These are all grand, surreal, and entirely unexpected, but I’ve little doubt that Adams would’ve made them work.
Oh, and then there’s the entire treatment for Doctor Who and the Perfect Planet.
That’s right: as written by Douglas Adams, this is the original idea for The Pirate Planet, drafting out the key players, the narrative, and even dialogue for the Doctor and Komnor. It’s fascinating and unique, the perfect epilogue.
The amount of thought that’s gone into this tome is truly brilliant: Goss and the publishers have even put in the effort to include one word in Douglas’ handwriting – the rather enigmatic “Mice” – and upside-down lettering when K9 falls victim to his own cleverness.
These tiny yet important details; the expanded plot; the laugh-out-loud writing style, reminiscent of Adams himself; the appendixes that shine so much light on the behind-the-scene events of the story: all of these things combine to make The Pirate Planet one of the most rewarding and essential Doctor Who titles on shelves right now.
Let the people of Zanak have their gold, Oolium, and other precious gems. We have our very own riches here on Earth too.