Candy Jar Books have unveiled the fiery cover art or The Flaming Soldier, the second Lethbridge-Stewart spin off novella.
The novel sees Brigadier Lethbridge-Stewart investigate a series of spontaneous combustion. How can an inferno start inside a brick wall? Who or what are the ghost-like creatures spotted in the area around Imber base? Does it have anything to do with Eileen Younghusband, hotel proprietor, whose ordinary day is about to be interrupted by secrets from her past?
Traumatic events from the Second World War impact upon the present day and a mysterious aircraft could hold the key to the identity of the flaming soldier. 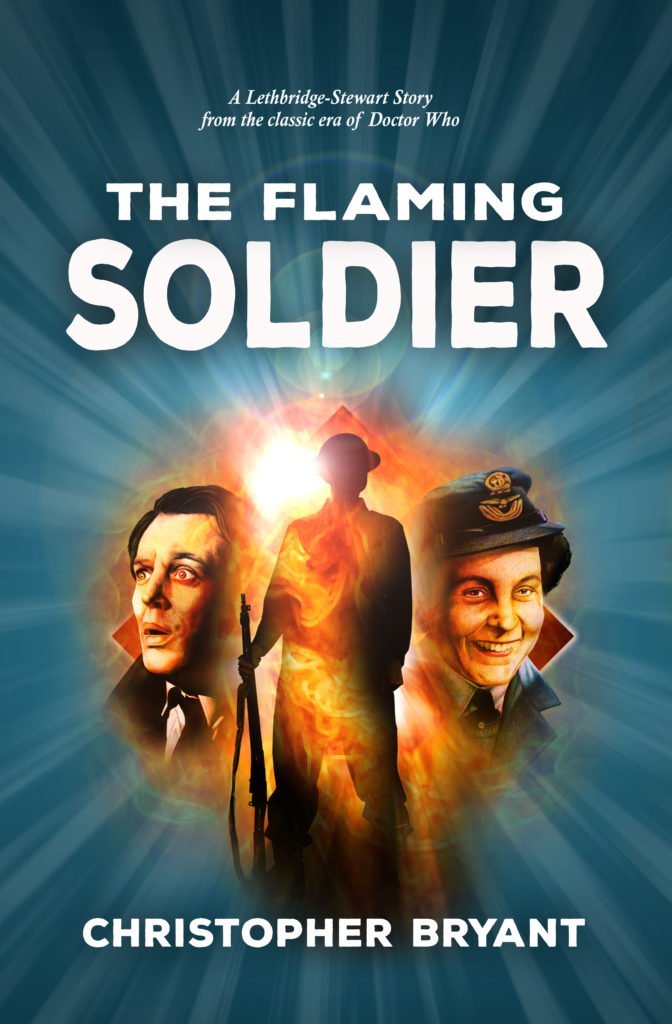 The cover art, designed by Richard Young, is certainly a change from the previous Lethbridge-Stewart novella, The Life of Evans. Breaking down his process Young said:
“For this second cover I wanted to create a full colour image rather than my usual mix of colour and black and white. I had also backed myself into a corner with The Life of Evans. I found it quite difficult to fade the hand-drawn train explosion into the background, so here for the first time I decided to create the fire effects digitally, though Travers and Eileen are still pencil drawings.”
Speaking of Eileen Younghusband – who worked in the Filter Room, the top secret hub of Britain’s air defence, and tracked the first V2 rocket into the country – writer Christopher Bryant was keen to expand upon her cameo appearance in The Life of Evans:
“Her inclusion came quite late to the mix, and despite her character hinting at a past fighting aliens, we didn’t fully explore this, so when the opportunity came along to delve deeper, I jumped at the chance.”
Designer Richard Young added:
“I was aware of Eileen from seeing her on the TV, but I never knew just how famous she was until I did my preliminary research. It turns out that she lived quite a life, so there was no pressure to get her portrait right… not! I’m pleased to say that the feedback I received from the family totally blew me away. I just hope that I have done her justice for all her fans.”
Quentin Younghusband, Eileen’s real-life nephew, was understandably pleased that Eileen’s legacy will live on:
“My aunt would have been tickled pink at the fact that she is a central character in this the latest book in the Lethbridge-Stewart series.”
The Flaming Soldier is now available to pre-order from the Candy Jar website.