We last saw the Master descending in a lift, in the hopes that he’ll make it back to his TARDIS on the lower levels of the Mondasian ship.
The inclusion of John Simm’s incarnation of the Time Lord in World Enough and Time/ The Doctor Falls leaves a lot of questions: what happened to him back on Gallifrey – if that’s where he ended up following The End of Time? What happened to his TARDIS, as we’ve not actually seen it since the Classic era, and how is it back now? Did he really kill off Missy (Michelle Gomez)?
But the one question I have above all else is: is that really the end for his Master?
The rumours abounded that Missy would be there as he regenerates, that we’d see it on screen, hence Missy’s ambiguity over when the Master turned female. I didn’t want this to happen. The second I realised what Missy was up to, dread set in. “Oh no. Tell me they’re not.” Turns out, they did. And didn’t.
A lot of fans want every loose end tied up. They want to see every regeneration, and every loophole tidied up. It’s a mentality I find baffling. Much as I loved The Night of the Doctor, without it, Paul McGann could’ve appeared in Doctor Who decades in the future, and an explanation about time-differential making incarnations age wouldn’t have been necessary. He could simply have been the Doctor for a very lengthy period, the Eighth Doctor ushering in so-called “old age” before regenerating and tackling the Time War. Just like the Eleventh Doctor, his could’ve lived for hundreds and hundreds (dare I say, thousands?) of years, leaving us fans to fill in the gaps. 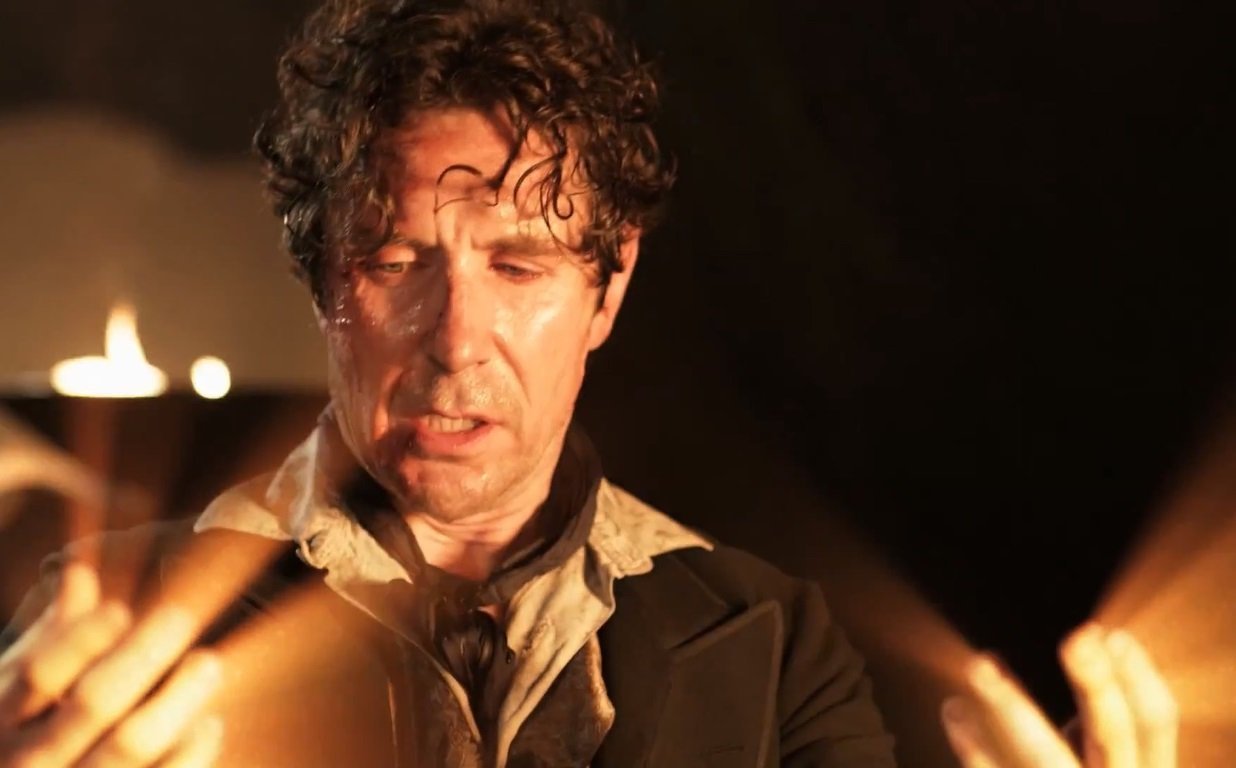 I say that, but McGann is also one of my favourite actors, so 2013 was a true treat.
Let’s turn back to the Master, then. John Simm has proved time and time again what an exceptional actor, and Master, he really is. Free of the sound of drums, his future looked bright. Then he was forced to regenerate. Thanks, Missy.
Except we didn’t see it. Off we went, cackling, not going gentle into that good night.
After The Doctor Falls, fans began to speculate again: what if there’s another incarnation between Simm and Gomez? What if there are numerous? That means Missy could have died, but the Master, at least in his personal history, could’ve carried on into the future of the show. We know he’d get his redemption, but for now, he can be evil again. Lovely. It’s a nice theory.
But mine is that the Master didn’t regenerate after being stabbed by his future counterpart. I know, you’re thinking that’s unlikely, but let’s not forget how the Master has a history of surviving. Even Simm’s version.
In Last of the Time Lords, he died. Then in The End of Time, he was resurrected, courtesy of a ring, some suicidal Saxon followers, and a kiss from Lucy. Then Lucy tried killing him again. She blew up the prison, sacrificing herself so that Dear Old Harry might pass over into the great beyond. His resulting body was subsequently dying. All it could do was die. Yet here he is again, with a face that looks quite a bit like that bloke from Life on Mars. Maybe it was some Gene Genie magic or equally, the Immortality Gate. This Master won’t die. And I hope he doesn’t.
Look at the excitement when the announcement was made about John Simm returning! He’s a popular actor, and a popular character. (The number of outlets who billed this as “THE MASTER IS BACK” perhaps says something about people being unable to see Missy as the exact same character, but that’s an argument for another time.)
Frankly, it would be brilliant if Simm’s association with the show stretches long in the future.
Of course, he could regenerate and still return. The Three Doctors, The Five Doctors, The Two Doctors, Dimensions in Time (shush), and The Day of the Doctor all show how timelines can contort. Heck, World Enough and Time/ The Doctor Falls does too. But I’d still like to consider Simm as the “current” Master?
A regeneration will inevitably happen. The Master will inevitably return. It’s not inevitable that the next time we see the Master, he’ll look completely different, however…

by Philip Bates time to read: 3 min
Features 13 Golden Scenes From Doctor Who Series 10
Features Sonic Feedback: What You Thought of The Pilot
12
%d bloggers like this: