Doctor Who fan creativity takes many and varied forms. There are the artists, who fixate upon aspects of the Doctor that are overlooked and make them shine. There are the writers, so desperate for a story to end a different way that they take it upon themselves to do so. There are the musicians and the video editors, looking for that all important emotional connection. And then there are those who’ve realised that the whole thing really is a bit silly and who just want to make people laugh. And today, we’re going to put one of them under the spotlight. 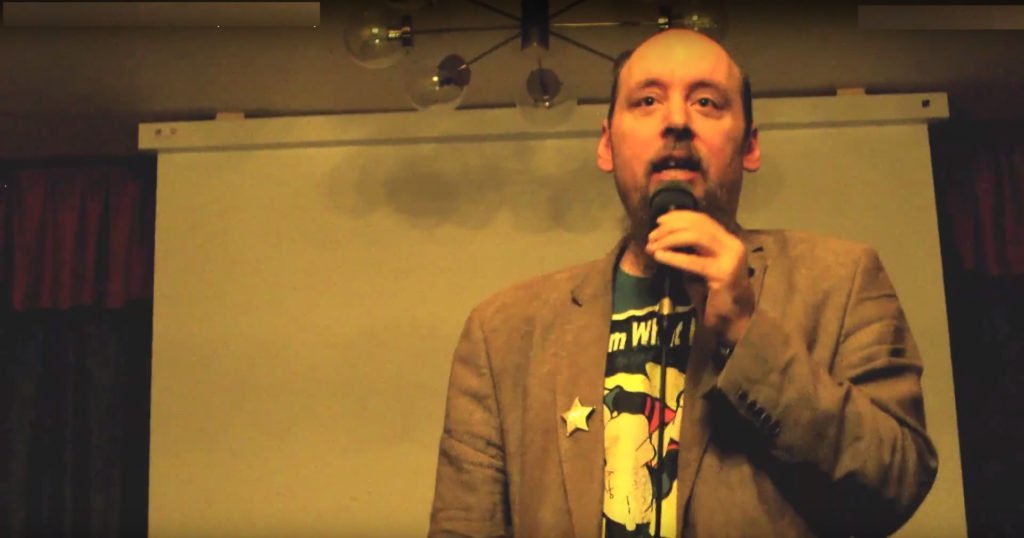 I first met Scott Lee Hansen lurking on one of the various Who-related Facebook groups I joined a while ago (somewhat begrudgingly; Doctor Who fans are dreadful on social media but you have to plug your work somewhere). His output is what you might call quietly prolific: along with the YouTube channel he also runs all manner of groups, including Doctor Who retrospectives, user-collaborated collections of sunrise/ sunset pictures, and one entitled Average, which seeks to celebrate the mundane. There are photos of supermarkets, budget hotels, and HP mice. Just so you know what you’re getting yourself into.
But there’s nothing mundane at all about Scott, as I discovered when I took the time to get to know him a little better. A man of a thousand thoughts, many of them so off the wall they couldn’t reach it with a selfie stick, Scott wears a great many hats, and at least one of them is a fedora. He works as a teacher, actor, writer, director, stand-up comedian – “Basically,” he says, “all professions where it is difficult to get paid well.”


Stand-up comedian, I hear you ask? Yes, and much of his routine takes its roots from Doctor Who – from 1963 right up until the present. “Doctor Who old and new is a goldmine for comedy,” Scott explains. “There was an obsession in really early Doctor Who of putting wet clothes on your forehead if you were ill, and the guarding is always incompetent. I may be poking fun but it’s not criticism; it’s always with an affectionate tone.”
There is a certain logic to this, but it carries an element of risk. Many comedic pieces about the history of Doctor Who have a nasty, cynical feel about them – Mark Gatiss’ infamous Comic Relief sketch springs to mind, as do some of the talking heads scenes in the DVD extras. It’s very easy to sneer at plastic doors and rubbish-looking monsters, and the tightrope between playful homage and active sneering is as wobbly as the sets. Thankfully, it’s something that Scott tries to avoid, even if it means implementing material that’s a little more… bizarre.
“The jokes are always trial and error,” he admits. “Even a well-repeated, well-received joke can fall flat on its face at any time… and any joke can hit stuff you don’t intend to be funny. It’s very confusing, but I make sure I’m always ready with reactions like ‘Yeah, I thought it was rubbish too’.”

In his routines, Scott sings Radiohead, reads birthday cards in the style of the Master, and waxes lyrical about his love of the show. Cybermen feature prominently – “Cheaper and easier to render than a Dalek”, Scott explains – whether they’re stomping around Prague or having a ‘rear of the year’ competition (more on that in a moment). “I think the Cybermen in Classic Doctor Who were a bit rubbish,” he says, “and in the new series, too well-designed and too robot like. The concept is sci-fi body horror and a family TV show can’t really do it justice without putting you off your beans and toast.
“When I do Cyberstuff it’s to show up the ridiculousness. For example in Old Who, there are many instances where the Cybermen’s buttocks feature prominently. We only really see the Cybermen invade London, then a UNIT soldier proclaims other cities have been invaded, so I made a video.”

There’s a whiff of Eighth Doctor syndrome about this – humans, forever seeing patterns that aren’t there. But then you actually look at the Cyberbuttocks – as compiled in Scott’s video, embedded a little later on – and realise that maybe he’s onto something. Particularly when you look at the Brigadier, who had a penchant for tight trousers. It’s hard to think of Nicholas Courtney as a sex symbol, but perhaps the ladies (and a number of the men) watching Pertwee in the 1972 were less hard done by than we thought.
Having grown up during Doctor Who‘s ‘rocky patch’ – also known as the ’80s – Scott began watching properly during McCoy’s first series and loved it, although “I can honestly say I don’t know why”. A brief obsession followed, which waned when the BBC cancelled the show, although not before he’d asked Colin Baker to sign Peter Davison’s autograph. After Season 26, he filled the gap with “Red Dwarf, Babylon 5, Tarantino, girls, and far cooler things”, and didn’t think about Doctor Who again until 2005.
“I was living in a foreign country with no internet and only an ancient TV with weird Czech programming every month,” Scott remembers. “Every month my friend’s family sent us videos recorded off British TV… totally random stuff. Rose was on one but the title sequence was cut out. I had no idea what I was watching ’til the Doctor introduced himself and my jaw dropped, utterly stunned, as the whole show flooded back to me. And amazingly, now it was cool.”

We’ve spoken a lot about the Classic years, but ask Scott about what Doctor Who means today, and he ventures into something that vaguely resembles ambivalence. “I think the show can be rather over the top and concept heavy,” he says. “How many times can it destroy and rebuild the universe? I liked [Series 10] because at the beginning they scaled all the hype back to a simple concept that was almost poetic.”
Does he prefer the old stuff? “The show can be many things, but primarily it’s horror without the graphic stuff. The good concepts get inside your head and won’t let you sleep. For example, I watched The Five Doctors live on television in 1983. It was a jolly romp through Doctor Who history yet I couldn’t sleep for weeks after because I couldn’t stop imagining the horror of being frozen in stone for eternity like Borusa was; those eyes staring around still gives me shivers. Doctor Who is suggested horror and sometimes, especially for children, that’s worse. On the whole, the new series has continued this brilliantly.”

He may concentrate on the comedy, but Scott also sees it as an opportunity to bring people together. “I’m trying to organise a fan exchange between Poland and Czech Conventions – a room where the two can mix and meet,” he says. “The Polish are really dedicated as Doctor Who has never been on Polish TV.” It’s fair to say that Doctor Who is a programme that’s permeated just about every area of his life. “When I got married, I had a Doctor Who themed stag do around my small Czech town. My mate Iain was unprepared with a costume so went to the shop and bought ten rolls of bacon foil, then spent the whole day Cybernising everything. Even his sister-in-law.”
Scott’s next gig is the upcoming WhoCon in Brno, although he sometimes struggles with getting bookings. “Only fan-run cons are interested,” he says. “The corporate or business-run ones don’t care.” He plans two routines: Tom Baker Bingo, “a humorous guide to how to watch Old Doctor Who“, and one entitled “Colin Baker is not so bad if you close your eyes”. They will, if nothing else, make it to the internet. Scott’s also tinkering with an idea that ties up two characters – one classic and one modern. It seems that as long as Doctor Who is here, he’ll be following along quietly behind, poking gentle fun in his quirky, inimitable fashion.
And if things go quiet? “Just mentioning Adric always gets a laugh.”
Scott’s YouTube channel may be found here – and don’t forget to follow his blog and Facebook page while you’re at it.