Freema Agyeman is Happy to Return to Doctor Who

Freema Agyeman, who played Martha Jones from 2007, says “never say never” to a return to Doctor Who.
The actress, currently making her West End debut in Apologia, was asked whether she could come back to the show, and replied:

“I had a really great time on the show, I really loved the character, it brings so many people so much joy. So never say never! I feel like there was more to explore with Martha, definitely, but I don’t know what form that would take.”

Though Freema first appeared in Army of Ghosts/ Doomsday (2006), she debuted as Martha in the following year’s Smith and Jones, and starred in a number of fan-favourite episodes, including Human Nature/ The Family of Blood, and Blink. She then returned in Series 4 (2008), and finally, for David Tennant’s last outing (briefly) as the Tenth Doctor in The End of Time. However, she further cropped up in Torchwood Series 2, reprising her role as Martha.
When we last saw her, she had married Mickey Smith (Noel Clarke), having gone freelance – but once a member of UNIT, surely there’s a way back for her?
She continued:

She’s referring to her work with BBC Audio… but might this give us hope for hearing Martha alongside the Doctor again for Big Finish? After all, Catherine Tate’s Donna Noble starred in a trilogy of audio tales last year, and this year, Billie Piper follows in her footsteps. Could 2018 be the year of Martha’s return?
Martha Jones is one of the most underappreciated Doctor Who companions, and it’d be nice to see she gets the recognition she deserves. Freema, too, is a great ambassador for the show, always bright, bubbly, and enthusiastic about the series and its fans.
Should Martha come back? In what capacity? TV or Big Finish – or both?!

Freema Agyeman is Happy to Return to Doctor Who 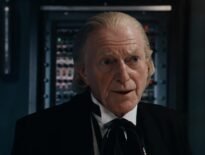 News Will We See The First Doctor Regenerate in The Chr…
News Big Finish: Torchwood Series 5 Artwork and Synopse…
5
%d bloggers like this: