It’a always exciting to hear new adventures for the Doctor, but this November, three very special audios from Big Finish are released – featuring David Tennant’s Tenth Doctor and Billie Piper as Rose Tyler!
There are three new serials due out – Infamy of the Zaross by John Dorney, The Sword of the Chevalier by Guy Adams, and Cold Vengeance by Matt Fitton – which you can order separately or as part of a Limited Edition boxset. Big Finish’s exclusive Tenth Doctor Adventures Volume 2 is limited to just 5,000 copies and includes exclusive artwork, photography, articles, a one-hour documentary featuring interviews with the stars and production team, and a bonus documentary examining the worlds of Doctor Who at Big Finish.
But we’ve seen the great artwork for that set already. Now, the audio company has revealed the covers and details for each individual story. What are you waiting for?! 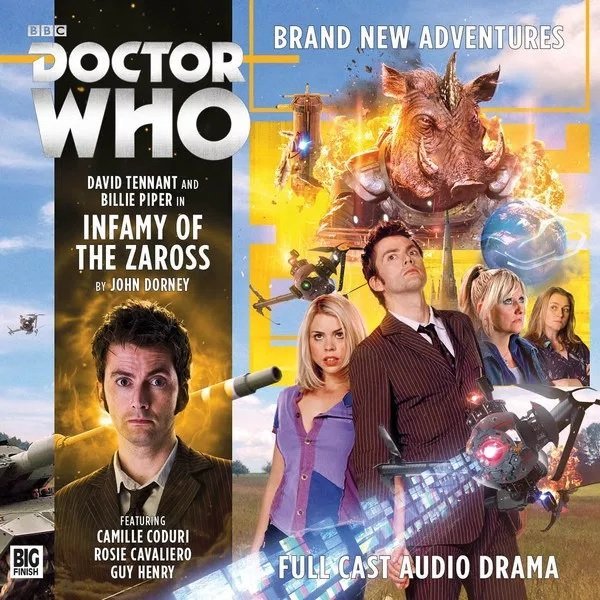 When Jackie Tyler takes an away day to visit her old friend Marge in Norwich, she finds her holiday immediately interrupted in the worst way possible – an alien invasion! The infamous Zaross have come to take over the Earth.
Or have they? After Jackie calls in the Doctor and Rose to deal with the menace, it soon becomes clear that this is a very unusual invasion indeed.
The Doctor is about to uncover one of the most heinous crimes in the history of the galaxy. And if he can’t stop it an awful lot of people are going to die.
Starring David Tennant as the Doctor, Billie Piper as Rose Tyler, Camille Coduri as Jackie Tyler, Rosie Cavaliero as Marge Ellmore, Beth Lilly as Jess Ellmore, Guy Henry as Ikron, George Watkins as Tanan/ Steve, and George Asprey as Leader.

The Sword of the Chevalier 1791 and the Doctor and Rose get to meet one of the most enigmatic, thrilling and important people in history: The Chevalier d’Eon. She used to be known as a spy, but then she used to be known as a lot of things. If there’s one thing the Doctor knows it’s that identity is what you make it. Choose a life for yourself and be proud.
Mind you, if the Consortium of the Obsidian Asp get their way, all lives may soon be over…
Starring David Tennant as the Doctor, Billie Piper as Rose Tyler, Nickolas Grace as Chevalier D’Eon, Mark Elstob as Joxer/ Butler, Tam Williams as Christopher Dalliard, Lucy Briggs-Owen as Hempel/ Dancer/ Duchess, and James Joyce as Darcy/ Groom. The TARDIS arrives on Coldstar, a vast freezer satellite, packed with supplies to feed a colony world.
But there are cracks in the ice, and something scuttles under the floors. Soon, Rose and the Doctor encounter robots, space pirates and… refuse collectors.
As Coldstar’s tunnels begin to melt, an even greater threat stirs within. An old enemy of the Doctor puts a plan into action – a plan for retribution.
Nobody’s vengeance is colder than an Ice Warrior’s.
Starring David Tennant as the Doctor, Billie Piper as Rose Tyler, Keziah Joseph as Lorna, Maureen Beattie as Brona Volta, Sean Biggerstaff as Callum Volta, Anthony Stuart-Hicks as Management/ Bert, and Nicholas Briggs as Lord Hasskor/ Commander Slaan.
All three are directed by Nick Briggs.
You can order the three stories from the Big Finish website, each priced £10.99 on CD or £8.99 for a download, or the Limited Edition set costs £35 on CD or £25 as a download.

by Philip Bates time to read: 2 min
Merchandise David Bradley Returns as the First Doctor for Big …
Merchandise Out Now: The Black Archive #13 – Human Natur…
0
%d bloggers like this: