Every so often, Big Finish do something with the worlds of Doctor Who that’s so fresh, so fun and thoroughly enjoyable. As an added bonus this time round, they didn’t even need the Doctor to do it.
Your humble review is referring to ‘new box set player in the game’, The Lives of Captain Jack, a superlative set of four adventures covering very different, and incredibly interesting, eras of cheeky hero and indefatigable shagger Captain Jack Harkness.
This isn’t actor John Barrowman’s first brush with Big Finish audio by a long shot, having previously worked on many Torchwood titles for our wonderful company. However, this is a far bolder move forward, linking the exploits (and various conquests) of the good Captain into the newer era of Doctor Who post 2005. Whilst Torchwood itself is representative of this era as well, these stories slink in to the Ninth and Tenth Doctors eras of the show more overtly but not forcefully as there may be some newer listeners not as familiar with those incarnations (if you aren’t, stop reading this pathetic offering of review, load up Netflix or Amazon and sit back to enjoy four incredible series of Doctor Who-shame on you for not doing that already).

To this day, Captain Jack’s past has never truly been explained. Like many a solid TV character, you can keep peeling the layers away and find something new about him that you didn’t know before, something that has always made him one of the most fascinating characters in the Doctor’s world. Even better, not only does the Captain have a mysterious past, but his time with the Doctor is also just as sketchy. There’s large chunks of time between his TARDIS related adventures that are just as patchy for audiences. There’s still a mystery to be solved when looking at Jack, some of the answers are included in this new collection and enough are unanswered in a satisfying enough way to leave you wanting more.
There’s four very different epochs covered in The Lives of Captain Jack you’ve got your Jack right after the Ninth Doctor leaves him behind on the Game Station, then your Jack that’s waiting on Earth for the Doctor to come back at the right moment, Jack meeting Midshipman Alonso Frame after Torchwood series three and Jack in his earlier years working for the Time Agency. Four very different ways to experience Jack Harkness and each one equally as wonderful.
This is no mere stopgap or cash in or rushed idea, this is a labour of love, to quote a certain nefarious cook. Each story is bold and delicately handled, from Jack’s anger and sadness at being left behind by the Doctor in The Year After I Died to his nonchalant disregard to anything resembling responsibility at the Time Agency in Month 25. With each new story, we get to have a deeper look into on of the Doctor’s greatest ever friends. Jack is a hero for the Universe and it’s here that we flesh out how that journey has been shaped whilst the Doctor wasn’t there to set out intrepid Captain on the correct path. 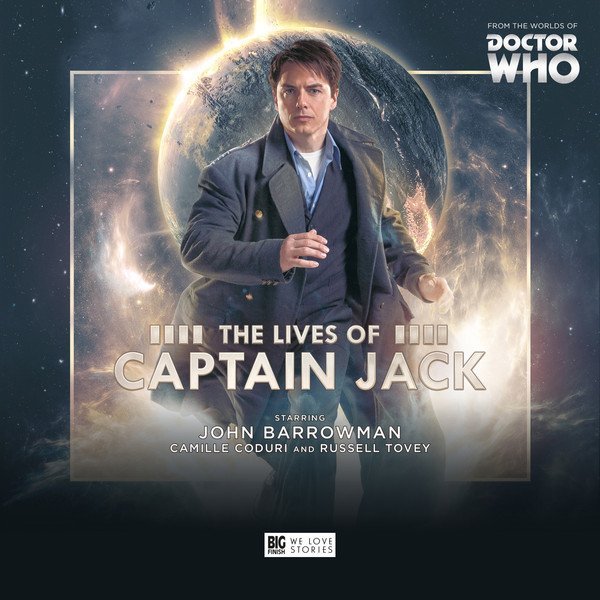 All of these hour long adventures are marvellous, bringing something new to the table for the listener to enjoy. Is there one that stands out from the others, well, how on Earth do you choose?  Finding out how Jack started to rebuild the Earth after the Dalek attack he helped foil is fascinating. Hearing him work with Jackie Tyler on the Powell estate during one of his ‘don’t want to mess up the timelines’ visits is heart warming and finding out exactly what happened after the Tenth Doctor setup Alonso Frame and Captain Jack is thrilling.
Perhaps though, the standout would have to be Month 25, which introduces us to something brand new-a younger Jack working for the Time Agency he first mentioned on television in 2005. How long have we all waited for a glimpse through this particular window into the past? Letting you know now, you certainly won’t be disappointed. Writer Guy Adams offers enough to satisfy the listener but leaves enough open for a return to this particular era of Jack’s life-could there be a spin off from the spin off? It’s so marvellously and mind-bendingly convoluted an idea that it would certainly work in the world of Doctor Who. We have a Jack here (well, not a Jack-we find out his original name before he stole that particular moniker) who is too young to know better, a self serving ball of arrogance with a fragrant disregard for the rules of the Time Agency and a propensity to want to just be out there in the Universe enjoying it. Once you listen to young Jack Harkness it all makes sense that the universe was only ever going to send him to the Doctor for satisfaction.
This is one of the most satisfying spin-offs of a spin-off that you could want to listen to, go get downloading now, as Ianto Jones and Gwen Cooper once agreed, life’s more fun with Captain Jack in it.
The Lives of Captain Jack is available to buy now from Big Finish on CD or Download for £35 and £30 respectively.