Candy Jar Books has revealed that the latest Lethbridge-Stewart novels will be issued as limited edition offerings – and The New Unusual is available to pre-order right now!
There will only be 400 copies of The New Unusual (and two subsequent books), and that first novel includes a revised ‘exclusive’ version of the short story, The Playing Dead, also by the novel’s author, Adrian Sherlock. All three limited edition books will only be available to purchase from the online Candy Jar Books store, and will not be made commercially available.
Here’s the synopsis for The New Unusual:

It’s the early 1970s, a time of change, a time of turmoil, a time of surrealism, LSD and the Age of Aquarius, a time of fads, Moon landings and wars, and the young people of the world are seeking something new – and unusual!

For Anne Travers, an encounter with a so-called ‘dream egg’ is just the beginning of a long nightmare. Her scientific curiosity aroused, Anne begins to probe the secret underground scene known as ‘dream-ins’, where students and others meet to get involved with a new craze and, perhaps, something far more alien to human experience.

And for Brigadier Lethbridge-Stewart, who finds himself drawn into Anne’s investigations, this probe will lead him and the Fifth Operational Corps to the wilderness of the Australian Outback, to a little opal mining town called Coober Pedy and a search for answers.

You might’ve already picked up hippy vibes from the blurb, continuing a trend that started in Beast of Fang Rock and followed on in Moon Blink and Night of the Intelligence. 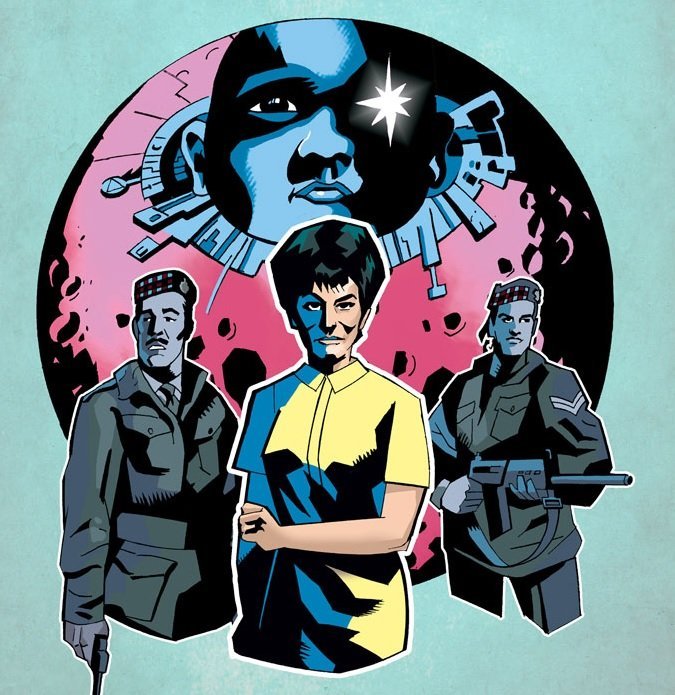 “Adrian first came to my attention via John Peel, and when Shaun and I discussed the idea of sending the team to Australia, it seemed common sense to have an Australian write the novel.”

“That was an idea I warmed to immediately, having always wanted to see Australia more connected with world of science fiction. Australia’s an amazing country, with many exotic and fascinating wonders, so it was a lot of fun to include them in the narrative. The New Unusual takes its title from a favourite line of dialogue spoken by the Doctor in the opening episode of the Doctor Who serial, The Mind of Evil. He states that the purpose of the Brigadier’s team is to investigate new and unusual menaces. When Andy first gave me the chance to pitch an idea for the novel, I knew I had to tap into the spirit of the times and that meant a fad or a craze, something the kids were into. Furthermore, I knew there had to be a hint of the mind-bending surrealism of the time, which reflected some of the experimentation with drugs such as LSD. But it had to have an explanation that was right for the world of Lethbridge-Stewart, something unearthly and threatening.”

Anne Travers takes much of the spotlight in the first half of the book, and Shaun Russell, head of publishing, explains:

“Anne continues to be a popular character, easily strong enough to lead a book on her own. When planning these books out we like to keep a balance between our two lead characters, and this year we’ve already had two Brig-centric novels and one Anne. This marks Anne’s second major plotline this year, as she continues to deal with the fallout of her father’s death and what effect it has on her place in the world.” “I had the idea that Anne knows there is a menace and becomes increasingly determined to uncover it. But in any good story, the main characters encounter opposition when they pursue their goals. It seemed to me that Anne might do what she has to do to succeed, overcoming opposition, yet feeling increasingly that she is unhappy with herself. A crisis comes when any one of us betrays our own values in order to achieve an end. I was fascinated by the notion that she might not like who she is becoming, if she goes too far and leads her friends into too much peril.

“And with Lethbridge-Stewart, the story offered a good opportunity to present him as a man in total contrast to the youth of the time and their willingness to seek that which is ‘new and unusual’. I knew that he had to go beyond simple soldiering and face real threats and the possibility of his own death. I knew he had to see himself, to learn a little something about himself, in this adventure into the unknown.”

The cover art is, of course, the unmistakable Adrian Salmon, semi-regular artist on the Lethbridge-Stewart range and a friend of the DWC. Salmon says:

“I knew my wife would kill me if I didn’t draw the cover. She’s a tough Aussie gal and when I found out The New Unusual was set in Australia, I asked to be the artist to bring Old Tom, Anne, and Bill in all their grooviness to life!”

The New Unusual, limited to just 400 copies, and including a revised version of The Playing Dead, is only available from the Candy Jar Books webstore for £8.99 (+ p&p). You can pre-order it individually or as part of the discounted UK bundle for only £26.25 (including postage), saving £9.72, or an international bundle for only £45.00 (including postage), saving £5.97. Or, you can buy it as part of Candy Jar’s yearly subscription offer.