Peter Davison has played many roles on television. The sneaky yet charming Tristan Farnon; the aristocratic sleuth Campion; the fifth incarnation of our favourite Time Lord; and that bloke in that Dianna Rigg mystery series I saw five minutes of on ITV3. By far my favourite, however, is a character he had taken to playing on recently. Peter Davison.
He first took on the role of himself in 2010 when he recorded a video for the 21st Gallifrey Convention. He was unable to attend, being far too busy in the hit musical Legally Blonde. The video portrays Davison taking a break in his dressing room after another successful show. It showcases Davison’s devotion to his fans as well as his utter devotion to the craft of acting. He treats his fellow actors with the utmost respect, never looking down on them at all.

Given his natural aptitude at playing himself, he quickly followed up the video, again for the Gallifrey Convention just one year later. This second video features many of Davison’s fellow actors. It focuses on Davison’s attempts to get to the convention on time. Although sadly this time you do not get to see his lovely home, just outside London.

Having played himself in short online videos, the next step was to play himself on television. Matt Berry’s brilliant Toast of London was a perfect fit for the new fictitious version of Davison. The show centres on a jobbing actor as he attempts to stay in work and navigate his way through an increasingly bizarre version of London, filled with people with ridiculous names.
Strawberry Rathbone being a particular favourite of mine.
The show has an odd mix of actors playing themselves and impersonations. Davison’s role starts small. He is seen sharing a pint with Toast and chastising him for revealing the plot of a play that has run 60 years. In the same episode, Toast accidently kills Jeremy Paxman, here played by another actor.
Incidentally the guest cast features many famous faces from Doctor Who. Toast’s housemate Ed Howzer-Black is played by Robert Bathurst, who played Padrac in Big Finish’s Doom Coalition. Tracy-Anne Oberman plays the wife of another actor, Ray Purchase, who Toast regularly… erm… visits. Louise Jameson also pops up in an episode alongside Oberman. Seeing Leela and Yvonne Hartman together is fun – even if they are playing prostitutes. Another fun cameo in the show is John Nettles, who has had to resort to poaching rabbits since leaving Midsummer Murders. Davison’s second appearance is larger. It turns out that him and Toast share the same agent, Doone McCormack’s Jane Plough (Pronounced Pluff) who has recently gone ‘back on the acid’. It’s Davison’s job to help her off the stuff whilst planning her surprise birthday party. If you listen carefully during Jane’s hallucination scene, you can hear the TARDIS when she looks at Davison.
Also watch this episode to see Davison take part in a Free Mason’s musical number.
By far his biggest role in Toast of London comes in Beauty Calls where he moves into Toast’s house, along with his brash northern girlfriend. In this episode, Davison brews a homemade wine that has some nasty side effects. However, given that he once cut his arm off in an off-screen appearance, the damage may not be permanent.
There’s one other occurance where Davison has played himself…. But I’m sure you all know that one.
Davison’s three Toast of London appearances are available on All4 and Netflix. But I would suggest starting with Afternoon Tea if you want to get into the show.
For UK viewers: Watch Afternoon Tea here; The Moose Trap here; High Winds Actors here; and Beauty Calls here.

by Liam Brice-Bateman time to read: 3 min
Features The Importance of The Caves of Androzani 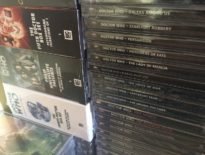