Big Finish’s Eight Doctor Adventures brought back a number of classic monsters over the years: starting as they meant to carry on, Blood of the Daleks began the range, with further returnees including the Cybermen, Zygons, and the Wirrn. And for Series 4: the Ice Warriors!
Deimos is something of a hybrid story. Taking elements of the classic “base under siege” story template and mixing in a dose of the newer elements of Doctor Who that we’ve become so used to thanks to Big Finish and the new TV series, we’re left with The Seeds of Death meets The Sontaran Stratagem. In audio format. It does sound like a bit of a tall order doesn’t it? Yet somehow it manages to keep itself together.
Arriving on Deimos, the TARDIS crew discover that it’s become a tourist attraction for space travelers wishing to see the catacombs of the Ice Warriors, who rested up there whilst sitting out the death throes of their own home planet, Mars. But things take a turn for the worse as the well rested Warriors decide to shake things up a little by claiming back what they view as theirs. And if some humans have to die for them to achieve their goals, then so be it!
Deimos, despite its promising premise, feels a little light for such a big two-parter. Certainly by the cliff-hanger at the end of the CD, one feels a little apprehensive that the story can stretch for another fifty or so minutes. However, what the script lacks in pacing, it makes up for in dialogue with a cracking teaser at the beginning showing the Ice Warriors as a desperate and hopelessly lost race desperate to survive. You can’t help but compare them to the Silurians or the Sea Devils who suffered a similar fate on Earth. 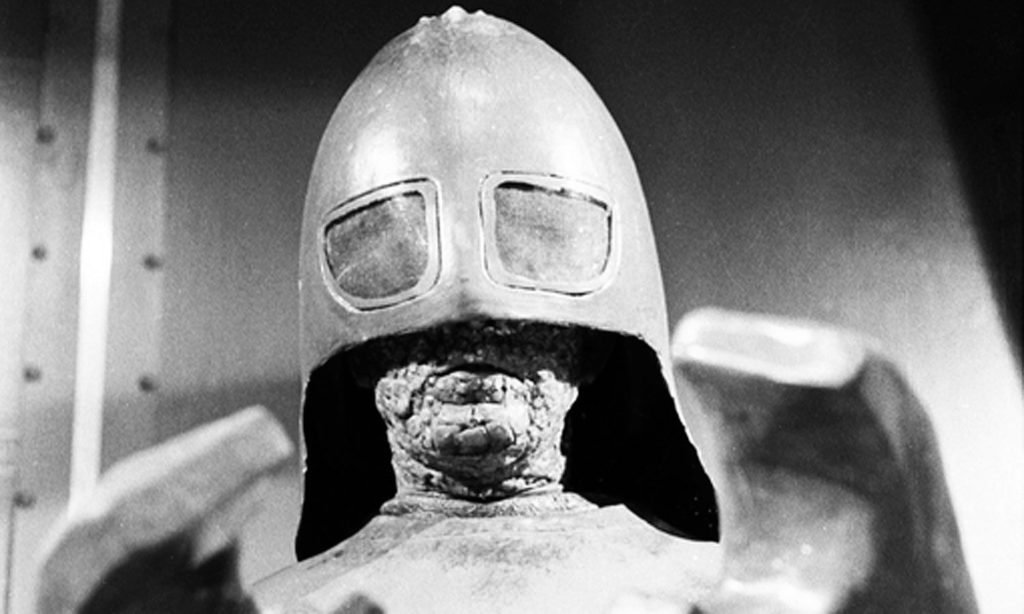 The Eighth Doctor (Paul McGann) interacts well with the Warriors, his lilting tones and calm manner a stark contrast to their aggressive and dominating statures. His relationship seems to finally be getting somewhere with his new friend, Tamsin Drew (Niky Wardley), and said friend certainly gets more to do then in previous adventures gone by. As always though, just when you’re finally moving on with your life, an ex always pops up to cause you trouble…
A meeting between this particular Doctor and the Ice Warriors has always been something that fandom has yearned for as Lance Parkin’s The Dying Days was such a great read. But the Warriors here are slightly more one dimensional and tend to not catch the interest of the listener from the get-go. Move forward to, say, 35 minutes into the play and things have improved in terms of dialogue and action sequences. Nick Briggs once again proves that he’s the king of the monster voices by playing the different castes of Warrior class.
Tracy Ann Oberman plays her role well and even though you can’t take the character of Yvonne Hartman out of her altogether, she satisfies the listener with her interpretation of Temperance Finch. Although all the supporting cast perform well, she clearly has a passion in this piece, playing it with maliciousness and contempt the whole way through.
All in all, Deimos is a good start; whilst things took a while to pick up the pace, when we get to the dramatic parts, we’re rewarded well. So would The Resurrection of Mars deliver a satisfying conclusion?
As you might have noticed from the cover, and as we’ve already alluded to, we find Lucie Miller (Sheridan Smith) being thrown out of a TARDIS and directly into trouble. When we last encountered her, she was hanging up her time travelling boots and settling for a quiet life, away from monsters and alien planets.
Her falling out with the Eighth Doctor had led to one of the more bitter Doctor Who departures and certainly left listeners needing a better form of closure on the Lucie Miller saga. And so with The Resurrection of Mars, we start to discover more about what happened to her since leaving the Doctor’s company and where she’ll end up. From the outset, we know that things between Lucie and the Monk (Graeme Garden) have turned sour; he callously dumps her in the middle of an Ice Warrior conflict and dematerialises his TARDIS without so much as a bye or leave. But never fear, the Doctor is near, and Lucie is soon reunited with him and by his side once more.
Whilst these two rekindle their special relationship, another couple are set to start travelling together: Tamsin has begun to view the world through the Meddling Monk’s eyes and she likes what she sees. Rewind to 2010, and it was a brave move for Big Finish, making a fuss about a new companion – all for it to turn out to be a red herring at the end of the day. Some of you may have clocked onto the twist that’s been coming and some of you may have had no idea but by the end of this story, Lucie has resumed her travels with the Doctor while Tamsin has become disheartened with him and the decisions he has made, and chosen his rival.
That’s the real meat of the story; the Ice Warriors become almost a secondary plot strand that needs tidying up, which writer, Jonathan Morris takes care of neatly and tidily. This reviewer will state that the Ice Warriors always bring with them a certain two dimensional quality to audio plays that they never quite seem to break, always hell bent on the same kind of honourable conquest, trying to reclaim what was once theirs. In this story, Morris manages to bring a little more colour to their cheeks making them slightly more threatening and believable than usual.
Overall, The Resurrection of Mars is an enjoyable conclusion to this two-part story. Those last few adventures for the Eighth Doctor have lacked a certain energy for him, most likely missing his friend. With Lucie back on the scene, The Eighth Doctor Adventures got back on track.
Deimos and The Resurrection of Mars are available now from Big Finish.

(Adapted from articles originally published on Kasterborous in 2010 and 2011.)