What should you buy for the Doctor Who fan in your life? Christmas is just around the corner, so you’re naturally on the lookout for something unusual and special.
This week, the DWC’s been guiding you through Doctor Who merchandise – including DVDs and Blu-rays, audio, and books – and today, it’s our chance to highlight a few material goods to sneak under the tree. That’s a clothing gag, you see. Material? Clothing? No? Fine. Let’s get on with it then… Here’s something you don’t see very often: a nice knitted tie, which I hear is fashionable in trendy cities, with the TARDIS woven into it.
We don’t think it can help you travel in time and space, but we’re not 100% sure and won’t be put in a corner.
They’re made by Lovarzi, an always-reliable company which has produced officially-licensed Who items since 2012, including the Fourth Doctor Scarf, Fifth Doctor Sweater, and Christmas Hat. Like many of its products, the tie comes in a nice branded box, so should be fairly easy to wrap. It acts as a neat way to present the tie, and further means the recipient has something to keep it in if he or she is a collector.
You can get it in either blue or grey, and they’re made from 50% Wool and 50% Acrylic, so should a long while.
Buy directly from Lovarzi and you’ll get free UK delivery too. Lovely. You’ll be out of luck if you live stateside or in other foreign territories, but if there’s an ASDA nearby, pop to their George section.
There, you’ll spot a pack of 4 Doctor Who socks. Yes, socks. Deal with it. Everyone gets socks for Christmas, birthdays, Love Day celebrations… Socks aren’t exciting – unless they’ve got cool designs on. (As a kid, I just wanted my feet to grow so I could buy some “grown-up” Simpsons socks. You haven’t lived until you’re wearing socks with Homer on, wearing only a towel, as he speaks on the phone. Sadly, “You’ll have to speak up; I’m wearing a towel” is too much to fit on a small garment, but the thought’s there.)
Uhm, yes, back to Doctor Who. There are four different designs in this one pack: a Dalek Invasion of Earth-era Dalek, the TARDIS, a Jon Pertwee-era Doctor Who logo (used more extensively than other logos in the show’s history, including for the 50th anniversary in 2013), and a modern-day Cyberman, i.e. the model introduced in Nightmare in Silver and subsequently in Dark Water/Death in Heaven (but don’t hold that against them), Face the Raven (briefly), and The Doctor Falls.
They’re pretty cool, pretty cheap, and generally quite… well, pretty. A nice stocking filler.

Evolution of the Cybermen T-Shirt 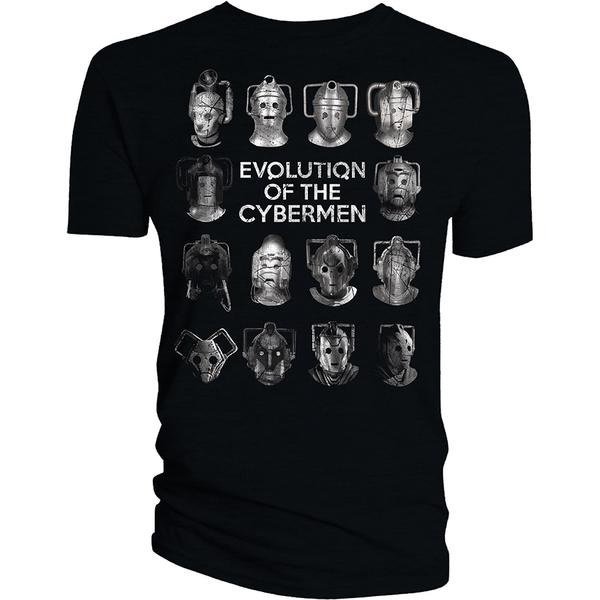 Speaking of the Cybermen…
Introduced in The Tenth Planet in 1966, the Cybermen have remained a strong presence throughout Doctor Who‘s long history; and with Twice Upon A Time revisiting Tenth Planet, it feels appropriate that fans get something Cyber-related for Christmas.
This t-shirt charts the numerous designs – probably including some best left forgotten, but equally some truly exceptional looks. It’s just their heads, so essentially, the shirt is a timeline of teardrops and handles. And even the pants ones looks sweet here: there’s something very pleasing about seeing a Cyber-Shade (from The Next Doctor) in the same grid as The Moonbase iteration; the wooden version from The Time of the Doctor beneath John Lumic’s Age of Steel Cyber-Controller; and the Cyber-Leader from Revenge of the Cybermen near the Controller from Attack of the Cybermen.
Doctor Who fans typically love seeing this sort of progression, a mixing of designs.
You can get one from Forbidden Planet, which displays it on a bloke doing that awkward “pointing at the camera” pose. It’s a win-win. Not Doctor Who, I know, but we’re sure Who fans will love it anyway.
This is a neat festive set comprising of a scarf and hat, weaving together emblems from Sherlock with Christmassy designs. Notably, you have stars and Christmas trees breaking up a pattern featuing “221B” (the address of Sherlock Holmes and John Watson’s rooms at Baker’s Street), Sherlock’s violin (which he used at New Year’s in A Scandal in Belgravia), and the “SHERLOCKED” lock screen on Irene Adler’s phone.
You can purchase the hat and scarf separately, but the set works out cheaper and feels like a substantial present. And again, because they’re officially-licensed through Lovarzi, you get free UK delivery.
Oh, and they’re made from 100% finest-quality Acrylic, so should keep the recipient warm throughout the winter! … which means pyjama bottoms.
These say “men’s” but that doesn’t mean much. They’re not stylish, if you had hopes on the recipient stepping out on the town in them, but they’re bright, fun, and are bigger on the inside. Well, maybe not the last bit.
The style looks very much like the Mike Collins-illustrated batch from a couple of years ago, meaning you’ve got a comic book-esque TARDIS in all its magnificent glory! Absolutely perfect.
I can just about see the Doctor lounging around in these as he tries to negotiate with the TARDIS. Not sure they’d suit Hartnell or Pertwee, but I reckon McGann and Tennant would particularly make them work.
Oh, they’re made of 100% cotton as you’d expect so are comfortable and warm – an ideal present for someone who needs some comforting after Capaldi’s regeneration this Christmas…

So there we have it, and nary an anorak in sight. Take that, stereotypes!
Which other Doctor Who clothing items do you recommend as gifts? And what’s on your Christmas List this year?