Doctor Who fans know Mark Strickson better as Vislor Turlough, the red-haired alien who travelled with the Fifth Doctor in 1983 and 1984. But since then, he’s become a big name in the world of documentaries, even working with the late, great Steve Irwin, aka The Crocodile Hunter.
In 2014, Mark was attending a convention during one of his brief trips to the UK; while the rest of the guests attended a panel, Mark and I crept behind the scenes and chatted about Doctor Who‘s 50th anniversary, producing acclaimed wildlife films, and dodging bullets in South Africa!
The DWC: Hi Mark. So you’ve previously mentioned [during the convention] that you weren’t 100% happy with the 50th anniversary events. What would you have liked to see for the show’s half-Century?
Mark: I would’ve just liked it to be more of a celebration of Doctor Who, and I didn’t think there was enough fun. Now, [with the Doctor Who Celebration convention] I think the BBC had a problem, which was that they had to make it a family friendly event; there were loads of people there. You couldn’t make it like a convention where you can just talk one-to-one with the actors.  That wasn’t going to work with all those people. They had to move people through very fast. To be honest, in terms of the convention side of it, I thought they did a pretty good job. I can’t see they could’ve done it any better. My only complaint, if there is one, was the 50th anniversary special [The Day of the Doctor] which I thought was just a bit tedious. I thought it should’ve been a lot more fun; it should’ve been much more a celebration of Doctor Who. And I think it was probably very enjoyable if you were a Doctor Who fan who had got all the references – that would’ve kept you going – but the whole point, it seems to me, was that the special should’ve been to celebrate a programme which generations have watched, families have watched – they might not have watched it for 10 years, but they should’ve still really loved it, and it should’ve brought back memories, and those sort of things, and for me, if didn’t tick that box. So I was, in a sense, a bit disappointed.
One suggestion was that older Doctors and companions should’ve been recast as different people.
Yeah – that would’ve been great. Good idea!
Do you remember what it was like on the set of The Five Doctors?
It was an occasion. And it was very, very special because that was 20 years. So you sort of thought, ‘well, how many of these people are going to be here in 25 years time?’ and that always goes through your mind.
And it was great for me: I was able to meet My Doctor, which is Pat Troughton, and things like that. We’ve always got ‘our Doctor’ as Doctor Who fans, y’know?
Did he live up to expectations?
Yeah, he was lovely! He’s an absolutely gorgeous guy.
You now work on documentaries: how did you get into producing?
I’ll try to simplify it. It’s not difficult. At 29 or 30, I decided I wanted to save the world! I was very worried about the environment, and I didn’t know what to do about this – but I did know I had no science training, so I thought I should get one. I went to Australia and I taught Theatre Studies for 5 years, which helped pay my way through an Honours degree in Zoology. I then came back to England and I sat in a flat in West Hampstead and I wrote three films. I sort of thought I’d be a wildlife presenter. I mean, you’ve been an actor, you’ve got a Zoology degree: surely you become a wildlife presenter! I wrote three films, two of which got commissioned. One was a special on kangaroos for National Geographic; one was the Ten Deadliest Snakes In The World (2001), which was Steve Irwin’s first film. It was a huge success, was massively popular across the world, and from that point onwards, I just became a name as a director/producer.
And I haven’t stopped making them since! Goodness knows how many hours I’ve made now: I mean, it must be well over 100 hours. And people say, ‘well, when can I see your programmes?’ The thing is, many, many programmes these days don’t even have credits at the end of them, so unless you know who made them… You can go to the website and find out. So for example, I’ve just made a six-part series for Al Jazeera channel, which is shown in almost every country in the world, including the UK. But you’d never know I had anything to do with it unless you went on the website because there are no credits on Al Jazeera. Credits are sort of things that are still left on English terrestrial television, the BBC, some German channels, some French channels… They hardly exist anywhere else now.
It’s a shame for my Mother, but it doesn’t really matter. It doesn’t matter who made the programme as long as it gets the message out.
With all your behind-the-scenes work, do you have more of an appreciation for the difficulties the Doctor Who crew went through?
Sure! It’s all about organisation and things like that, yeah. I have a far greater understanding of budgeting because people think – I don’t know – they think I spend a lot of time out in the field, filming dangerous things. But I spend about two and a half to three months a year out there doing that; it might take 8 months of travelling the world to get a commission up; a lot of my life is budgeting, doing staff issues, edit issues. 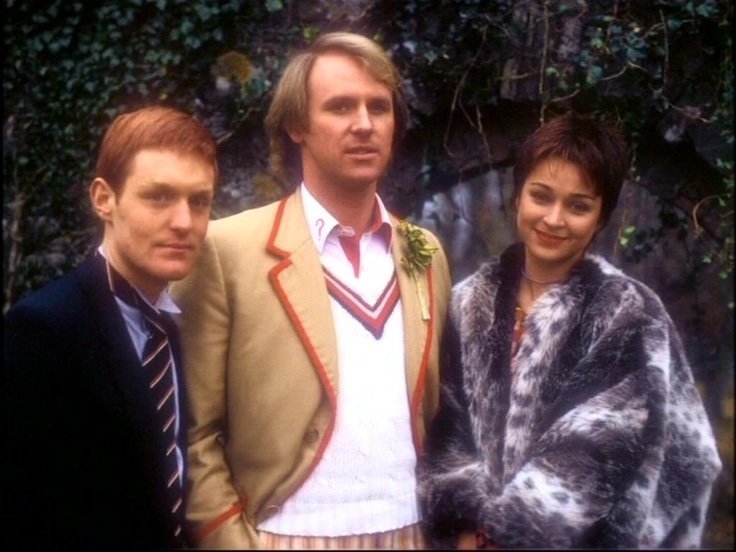 If you spend more than a third of your budget on filming, you have not got enough left for post-production, which is much more expensive and much more time-consuming than the filming.
Do you prefer that to acting?
I never decided to give up acting. I just got very busy as a Producer. I’m now 55, and it’s getting increasingly physically difficult for me to do what I do in the field. I mean, we don’t stay in hotels; we’re living and sleeping on the floor, y’know – literally getting shot at in appalling conditions sometimes. And it’s very physically tiring.
So you must enjoy conventions!
Yeah – I don’t have to wear a bullet-proof vest for conventions! I don’t think anyone hates me quite that much. There’s nothing like bullets coming over your head to keep you alert, I can tell you.
Where was that?
That was in South Africa. It was about rhino poaching, which is a huge issue.
On a cheerier note, how did you feel when the Doctor Who crew told you you’d have to dye your hair to play Turlough?
Well, the issue was that Peter Davison and I both have very similar hair, cut in a very similar way, as it happens – just by chance! Particularly in the summer, mine goes very blonde. And on a long shot, we looked just too similar, so you had to do something to make Turlough look different.
Also, it didn’t matter to Peter but Turlough was an alien, so when you first saw him, you needed to be a bit suspicious of him: he shouldn’t have looked quite right. People often say, ‘weren’t you too old to play a schoolboy?’ And I could throttle them! I was not a schoolboy; I was an alien who had landed posing as a schoolboy. It’s just completely different. So if, when you first saw me, you thought, ‘oh, he’s too old to be a schoolboy, he looks weird’ – that’s exactly what you were supposed to think! Immediately be suspicious of him. And so the Doctor Who team said, ‘well, what we’ll do is cut your hair off and be bald.’ And I said, ‘you can… but I’m going to require at least 2 months’ payment after I finish my contract for loss of earnings’ – and mention money in those days anywhere near Doctor Who… They came up with another solution! That was: cut it short, colour it red with a wash-out dye.
And you even had to do your eyebrows.
Yeah, my eyebrows were glued up: they put glue through them and glued them straight up. Not many people notice that. Once you know it and you look at it, you can see it immediately – it looks totally weird!
So I looked pretty weird for about 2 years, yeah. And one of the issues with the red hair was that I was instantly recognisable – because it wasn’t wash-out at all! It was supposed to be wash-out dye, but my hair was just bright copper red.
Kids would recognise me in the street, and things like that.
I went to a restaurant once and I complained about something, which is your right: I don’t go around complaining about things but it was pretty major – I can’t remember what it was – but I just politely said, ‘I’m sorry; that’s not acceptable’ or something like that. And they said, ‘you’re that guy off the television, aren’t you? You’re horrible on television too! You’re horrible in real life!’ And I thought, ‘what?!’
So it had its issues, being Turlough, sometimes. I’m not horrible: I just think the cheese is a bit off!
Massive thanks to Mark. Contrary to one chef’s opinion, Mark is one of the nicest people I’ve met: very giving of his time and goes out of his way to chat with the fans. It was amazing meeting one of my favourite companions and having an in-depth chat with him.