John Peel Returns to Doctor Who With The Lucy Wilson Mysteries: The Midnight People

It’s always a treat to read a tome from John Peel that’s set in the Doctor Who universe – and, thankfully, a new one is on the way, courtesy of Candy Jar Books!
Spinning off from the Lethbridge-Stewart range, the third Lucy Wilson Mysteries novel, The Midnight People is available to pre-order now, and features the Brigadier’s granddaughter. It’s written by Peel, whose association with Doctor Who goes back to the late 1980s, when he was personally picked by Terry Nation to novelise the remaining 1960s Dalek serials, including the 12-part story, The Daleks’ Master Plan and Patrick Troughton’s debut serial, The Power of the Daleks. He was also chosen to launch an entire fiction range with Timewrym: Genesys, in 1991, the very first original Doctor Who prose novel!
Shaun Russell, head of publishing at Candy Jar, says:

“John has written two Lethbridge-Stewart books for us, The Grandfather Infestation and The Life of Evans, both of which have been very popular. I always wanted him to tackle a Lucy Wilson story. He’s very adept at focusing on character and I wanted something that was dark and moody, and John, as I expected, did not disappoint.”

The Midnight People is reminiscent of the HTV series, Children of the Stones but with a modern twist. John says:

“Lucy and Hobo are lovely characters to write for. They aren’t superheroes, they’re just youngsters who rely on their wits and their courage, and have to fight off fears and insecurity. Are they seeing more than is there? And, if not, can two teens save the world – again? Plus, of course, I’ve introduced another of my odd aliens.” 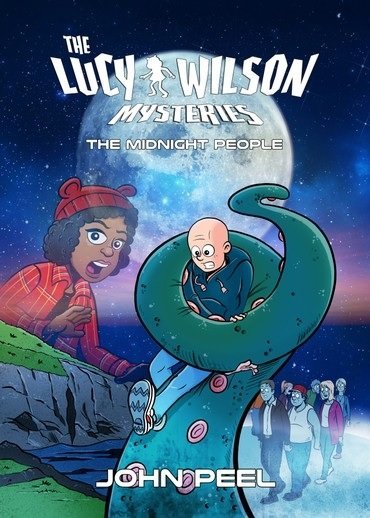 Monknash was once home to a band of smugglers, but it is now dull and boring. Except to Greg Morton, who’s absolutely terrified something unimaginable has happened to everyone in the village.

He telephones his friend, Hobo, to ask for help. When Hobo and Lucy arrive, they discover that something odd is definitely going on – but what? People seem joyless and dull, showing no emotions at all.

Can Lucy and Hobo take on an entire village by themselves?

On November 29th 2018, Candy Jar officially releases the second The Lucy Wilson Mysteries: Curse of the Mirror Clowns by Chris Lynch. Though it’s been available exclusively to fans through the Candy Jar site since May, it will now be made available to the wider public.
Shaun continues:

“It seems that people are really embracing Lucy and Hobo. We will be launching Curse of the Mirror Clowns at the Turn Left Doctor Who Convention in Cardiff on 1st December in Cardiff. Chris will there talking about the book, as well as Simon A Forward, Alyson Leeds, Andy Frankham-Allen and myself.”

John Peel Returns to Doctor Who With The Lucy Wilson Mysteries: The Midnight People