We begin in a dark void. Slowly, out of the shadows, an amorphous, howlaround blob begins to ebb, expand, and pulsate. Segun Akinola’s haunting new theme tune resonates, and we are sucked at hyperspeed through the warping of space-time into an eerie black nothingness.
It goes without saying that The Ghost Monument, episode two of the brand new series, made a strong first impression, with a gorgeous new title sequence that was simple and evocative. Of course, everyone has their own take on what a Doctor Who title sequence “should” look like, and whilst I’ve no doubt that some viewers will long for the thunderous clouds of Matt Smith’s heyday, this Troughton-esque opening was far more my cup of tea – spooky, surreal, and unsettling. I love it.

The thing is, the best title sequence in the world only amounts to a tiny percentage of an overall episode, and what really matters is whether the remaining 48 minutes was actually enjoyable. And yes – yes, it was. I resisted all temptation to browse Twitter or even BBC News on my phone as the Doctor (Jodie Whittaker) and her companions battled their way across the fearsome wastes of the planet Desolation, and by the time the closing credits sped across my screen, I was left eager to see where the series was heading. Like its predecessor, The Ghost Monument ended on something of a cliffhanger, and I’m finding this an effective way of sustaining my interest in the long 7 day wait for the next instalment. Indeed, this storytelling technique harks back to the very first William Hartnell series in 1963/64, and this stronger sense of continuity really helps to underpin the journey that all four of the travellers have embarked on. In fact, it’s a feeling I’ve not really had since 2007, when Martha Jones found herself sucked into the frenetic TARDIS life with Doctor number 10.
But what of Doctor number 13? I wasn’t bowled over by Jodie Whittaker’s performance in The Woman who Fell To Earth. Whilst I freely admit that she is a talented actor, I remained unconvinced by her debut performance, seeing instead a person who was reading a script with great volume and enunciation but with little nuance or believability. And whilst some of these missteps were evident in episode two, my overall verdict of Whittaker’s acting is altogether stronger. Perhaps she was aided by better dialogue? In The Ghost Monument, Whittaker had fewer meme-able ‘soundbites’ and was instead allowed to express herself more naturally. There were a couple of cringe-inducing moments, such as when she declared her love for locked doors whilst brandishing her sonic screwdriver like Lord Voldemort on drugs, but for the most part I found myself being carried along by her performance, rather than having the fourth wall broken by some questionable delivery.
If anything broke the immersion of episode two, it was Chris Chibnall’s script. That’s not to say it was bad (because generally I thought it was good) but there were moments where I ceased to be immersed in the drama because the pages of the script became visible. The most pointed moment was when the Doctor expressed her dislike for guns whilst an excitable Ryan went on a shooting spree shouting “aaaaaargh.” The robot ‘victims’ quickly sprang back to their feet, the Doctor tutted and then wiped the baddies out with an EMP, nonsensically asserting that such a solution demonstrated the pointlessness of shooting – which made no sense whatsoever. It felt like an opportunity for the writer to shoe-horn a ‘moral lesson’ and assert the Doctor’s passivity, and the somewhat ropey logic made it a stand out moment for me. 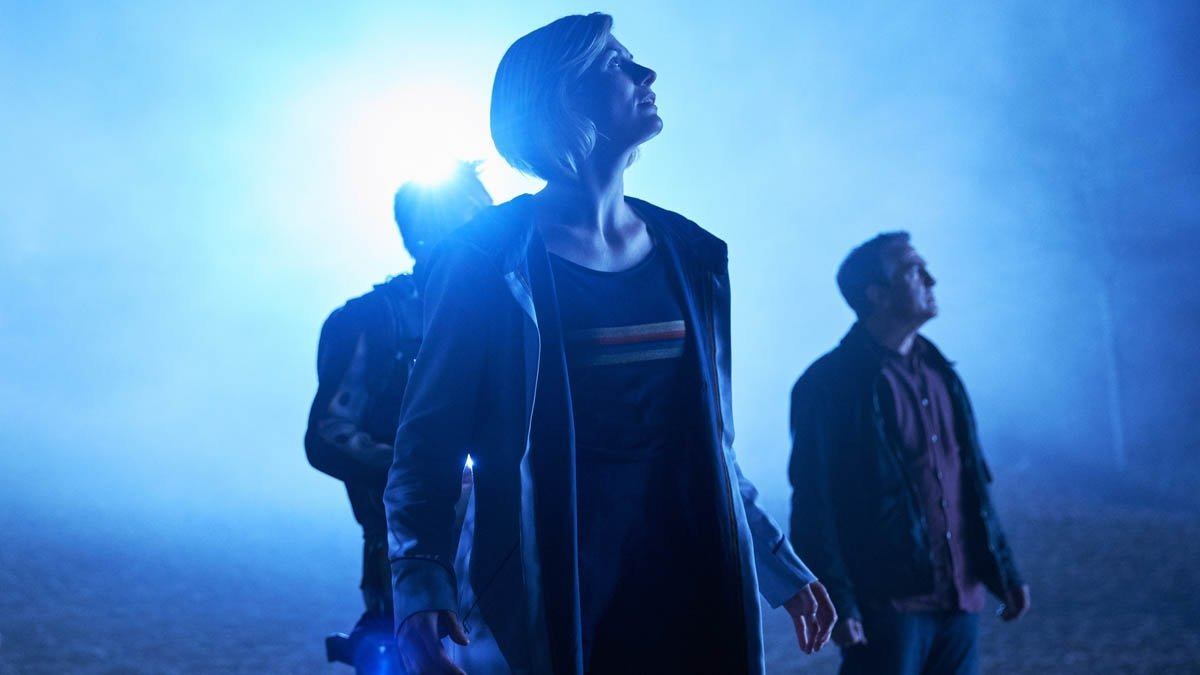 And speaking of shoe-horning, I must take a minute to assess the inclusivity agenda which was in evidence in this episode. And by all means let’s be inclusive – it’s a good thing. Prejudice is not; hashtag love. Unfortunately, the BBC seems to be taking a ‘pointy foam finger’ approach to race, gender, and sexuality to the detriment of story-telling, and indeed in a way which I believe is counter-productive. It’s hard to fully understand where this obsessive preoccupation comes from, but even if we run with the hypothesis that the BBC actively embraces diversity in an attempt to ‘normalise’ it, the sheer heavy-handedness with which it goes about its business has the opposite effect on me. I don’t think you can tell society not to be racist, homophobic, or intolerant by attaching flashing neon labels to your main players. Surely the best method is to slip diverse characters into the story-telling with as little fuss as possible, like they did with Dayna in Blake’s 7. And Dayna kicks a$$.
In The Ghost Monument, one moment that stood out was when Susan Lynch’s character, Angstrom mourned the death of her wife, making a clear reference to her sexuality. And it lacked subtlety. It might have felt more seamless had it not followed the electromagnetic spectrum of diversity that was in evidence in episode one, but in this case I feel it drew more attention to the elements of her identity than were necessary for advancing the story. Some moments with the Doctor were similarly awkward; she was branded with an Anti-Gun label to prove that she’s Passive, but was then shown to be burning a race of creatures by igniting gas (“I hate guns but I’m still empowered, got that?!”). It was the viewer equivalent of being whacked round the head with a sledgehammer.
I would suggest that, instead of haphazardly applying labels in an attempt to instill tolerance, the production team should focus on character depth. For instance, Ryan’s dyspraxia might cause him to stumble on ladders, but how does it impact his confidence and self-esteem, if at all? Let’s see some layers and some subtlety, and less preachy box-ticking. And that’s coming from someone who has experienced homophobia first hand, before the Twitterati comes after me. I’m all for making the world a better place, but surely some methods are better than others, nay?
Okay, rant over. I must confess, it’s always much easier to criticise than it is to praise, and I mustn’t shy away from the fact that I genuinely enjoyed this episode. As with The Woman Who Fell To Earth, The Ghost Monument was dripping with visual quality and mostly top-notch performances. The real winner for me has to be Bradley Walsh’s portrayal of Graham O’Brien, who makes the whole thing look effortless, and his scene with Ryan Sinclair (Tosin Cole) in the broken boat felt moving and natural. Sadly, Mandip Gill wasn’t really given the opportunity to show us what she can do, but she served the script well and I hope that there will be more scope for her to shine in episode three and beyond. I also really liked the narrative link to the Stenza (even though it made things a little too complicated) and the cloth-like Remnant creatures were sinister and creepy, if a smidge Goosebumps.
Finally, we have the new TARDIS interior, which really was a revelation for most people as there had been zero publicity prior to its episodic debut. As with title sequences, everyone has their own take on what a TARDIS console room “should” look like – myself included – and whilst this one isn’t really to my taste, it’s in-keeping with the series’ mythos and is faithful to past interiors, so the designer gets full marks for effort. Mostly. I should say, though, that I think the crystalline structures look too much like cheap plastic, but I do love the criss-crossy, overlaying hexagonal roundel things, and the custard cream dispenser is a fun little touch.
All things considered, I think I can dismiss the majority of my criticisms at this early stage. It’s a production team that’s still finding its feet and it’s not fair to expect everyone to be firing on all cylinders in the second week. The BBC’s inclusivity agenda is a bit patronising and irritating, but I think it’s a problem that is much wider than Who, and it doesn’t mar my enjoyment of the programme to such a degree that it’s unwatchable; it just makes me cringe with unease.
Anyway, next week’s episode is all about Rosa Parks, so I’m sure everything will be fine…