Owen Harper might be the most fully developed character from Torchwood. Throughout the TV series, we see him slowly grow from a uncaring letch to someone who is genuinely saddened by the events around him. James Goss gives us a new Torchwood story that explores Owen’s humanity and compassion, for a serial killer.

It’s wonderful to have Burn Gorman back playing Owen again. It certainly helps that he’s the best actor the show ever had too. Lots of television actors have a hard time moving to audio. Listen to the early performances of Alex Kingston and Jemma Redgrave and you will hear that they have come on leaps and bounds. Not so Burn: he was excellent from his very first Big Finish story, Corpse Day and is no less brilliant here.

Burn is playing Owen at a time when he was at his most vulnerable. Owen is dead, or at least almost dead. The Risen Mitten brought him back, but maybe he didn’t want that. He cannot eat, sleep, or be injured as he would not heal. This inability to interact in a tactile manner with the world really gets at Owen. In some ways, it heightens his empathy. He is not the heartless misanthrope we see in Series 1. Owen Harper has changed.

Carrying over from Corpse Day is Owen’s weird fetish for watching Andy eat – proof that Owen is still a bit of a sleezebag. The two of them are great together with their characters’ personality traits bouncing off one another. Andy is surprised how detached Owen can be when being a serial killer’s doctor. Owen is willing to see the good in her, for some reason.

On the other hand, Andy Davison hasn’t really changed. He’s still the optimistic copper on the beat. Eager to be a part of Torchwood’s world, but still repulsed by much of what goes on in it. He would never have really hacked it as a member of Torchwood at this point in his life. Tom Price always manages to convey Andy’s struggle to do the right thing when he isn’t quite sure what is going on. It is very easy to imagine Andy with a confused look on his face for much of this story, but there are certain times when Tom puts real pain into his performance. Mostly those are scenes with Megwyn Jones.

The most hated woman in Britain: Megwyn Jones, killer of children. We are introduced to her when Owen gives her the result of a recent medical examination. She is dying. Maybe after all these years she is willing to tell the country where the children are buried, to finally give their families some closure and the police officers some recognition.

Sian Phillips plays this serial killer like a woman tired of the world. She switches between sweet and terrifying at a whim in a very unsettling performance. I never quite knew whether she was truly remorseful; she keeps you guessing until the very end. Hearing her interact with the family members of her victims is heart breaking. Very powerful storytelling.

Trying to work out which is the most distressing Torchwood story is like trying to work out which Season 24 Doctor Who story is the campest; it’s probably just all of them. However, The Hope delves into the less savoury side of serial killers, if that’s the right phrase. Goss tackles the media circus that erupts around killings of this nature. When books are written, documentaries made, and many many people profit from the deaths of innocents. All this is used to make the killer sympathetic and makes for uncomfortable listening – of the best kind.

I find that audio stories set on Earth are often more impactful than those off in space. We all have a familiarity with our own planet and I think that helps to build a deep picture in our minds. In this story, that is aided by some excellent foley and soundscape work. It’s especially effective when the characters are out on the titular Hope, a boggy fen with nothing but misery and fog. The squelch of boots, voices carrying over the empty landscape – the very setting is chilling.

Scott Handcock is on directing duties and brings out some wonderful performances from the guest cast. Sian Phillips and Ian Saynor are standouts in this release, respectively playing the killer and the police officer who takes all the credit for stopping her. They both bring a real weariness to their performances; their voices painted their strained faces perfectly in my mind.

Perhaps horrors on audio are all the worst for happening in your own head. They’re as awful as your subconscious will allow: turns out, mine can be pretty gruesome. If you want to be properly scared by your own thoughts, then I suggest listening to this one in the dark. Like all of Torchwood’s darker stories, it shows how terrible we can be as humans.

If you want to see Owen in a lighter story, check out The Last Beacon, written by and starring Gareth David-Lloyd. Ianto and Owen are great fun together. 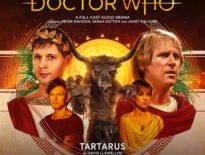