Coming Soon: Kklak – The Doctor Who Art of Chris Achilléos

A new tome from Candy Jar Books will collect together all the Target covers by iconic artist, Chris Achilléos.

For the first time ever, Kklak: The Doctor Who Art of Chris Achilléos will bring together Achilléos’ Doctor Who artwork in chronological order in its entirety, along with commentary from Achilléos himself (plus some fans) – presenting the definitive guide to his seminal work. The book also includes a small contribution from Twelfth Doctor, Peter Capaldi and a foreword from Achilléos’ long-time friend and collaborator, the late Terrance Dicks.

His covers for the official Target novelisations, which began in the early 1970s, defined a generation’s image of the Doctor and his adventures – particularly after the show disappeared from British screens in 1989.

Lavishly detailed, with psychedelic overtones and an unapologetically pulpy sensibility, these covers perfectly captured the eccentric appeal of the classic series. To this day, Doctor Who luminaries tip their hat to the influence of Achilléos’ work. The opening of a 2016 exhibition of Target’s cover artwork at the Cartoon Museum, London, attracted the series’ then-showrunner, Steven Moffat, as well as Peter Capaldi.

Achilléos explains his motivations for compiling the book:

“I go to a lot of conventions, and the enduring affection of the fans for those Target novelisations is such a compliment. As an artist you’re always wary of being pigeonholed – you want all your work to receive the same amount of attention! But Doctor Who is such a phenomenon, and the commitment of the fans so pure, you have to be grateful. I hope they enjoy this special book.”

As the home of the Lethbridge-Stewart series, one of only a handful of fully licensed Doctor Who ranges outside of the BBC, Candy Jar was the natural home for Achilléos’ new title.

“The Target novels were a huge part of our childhood. And when it came to our own range of Doctor Who books, they were an inspiration. You could always tell that they were produced by people who cared. There was an attention to detail, and a level of quality, which quite frankly, went above and beyond what was necessary. Doctor Who will sell regardless, but as a series it means so much to people – and to us here at Candy Jar – that you want to do repay that. And from the first moment you picked up a Target title, with one Chris Achilléos’ brilliant designs on the cover, you knew that you were in for something wonderful. His work manages to capture everything that makes Doctor Who special, and stand alone as works of art in their own right. When Chris first spoke with us, I jumped at the chance to work with him.”

Featuring every one of Achilléos’ Doctor Who designs, as well as never before seen material giving insight into his creative process, Kklak: the Doctor Who Art of Chris Achilléos is released in late Spring 2020 by Candy Jar Books. It will be available as paperback and limited edition deluxe hardback.

Coming Soon: Kklak – The Doctor Who Art of Chris Achilléos

by Philip Bates time to read: 2 min
Merchandise 20 Years After Leaving the TARDIS, Ace is Back for… 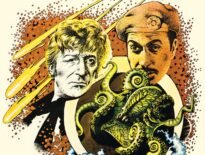