Professor River Song has been a lot of things: archaeologist, explorer, criminal, but occasionally she is a detective. In her seventh (yes, you read that right) series from Big Finish, we delve into the Melody Malone side of her character. The idea of River as a detective was introduced in The Angels Take Manhattan and I’ve always been a fan of River as a sleuth in a pulp detective tale. These stories are filled with murder, skulduggery, and intrigue. A world of crime and chaos across time and space.

I was very surprised by how few of the crimes were actually committed by River.

Colony of Strangers by James Goss

The set begins with a bit of Scandi-Noir. Fjords, Nordic accents, and the cold, all with the Doctor Who twist of being set on an alien planet. Human colonists have been living on Bondar for a long time; they have gotten used to their new life and many of them like the quiet. They don’t so much like the faceless bodies washing up on the beaches. Those are certainly ruining River’s holiday.

River teams up with local police detective Karl, a man not used to criminal investigations. There’s not much crime on Bondar. He is a simple man who likes his simple life and does not appreciate River causing a commotion, although he is quite grateful for her investigative skills. They make a fine pairing. He is the quiet and calm to River’s manic running about.

It was easy to imagine this story looking like The Killing or Wallander, bleak horizons and muted colours. The sound design helps to conjure images of barren vistas and cold fjords, all helping to enhance the chilling atmosphere, in bother senses of the word.

Abbey of Heretics by Lizbeth Myles

You’d think that River wold make a terrible nun… and you’d be right. We see her running around in a Psychic wimple in Doom Coalition 3, being very un-nun like. Still, I think the look quite suits her.

Abbey of Heretics sees River looking for a book. One with a storied past that she has finally traced to a remote abbey. The sisters are very happy for her to take a look at the book, but they certainly aren’t going to let her leave with it.

This story is less about crime (okay, she tries to steal a book) and more about sin. About Medieval Christian understanding of what should be permitted learning and what should be left alone. This could have easily turned into the final scene of that episode of Blackadder where he becomes Archbishop, but Lizbeth Myles is cleverer than that. River is not here to whip a nunnery revolution and change the way the sisters think; if anything, they affect her more.

River can have a tendency to shoot first and not bother asking questions, but she has to be a little more cunning for this story.

Barrister to the Stars by James Kettle

Doctor Who stories in a courtroom… No, I don’t know why you’re all pulling that face. What could you be thinking about? This is a River Song story; she might have similar hair to the Sixth Doctor (nobody tell her I said that), but she goes about it in her own special way.

This is my favourite story from the set.

Barrister to the Stars is James Kettle’s first story for Big Finish. Anyone who listens to the credits of Radio 4 sitcoms will recognise his name. I would highly recommend Tom Wrigglesworth’s Hang-Ups, staring Paul Copley from Children of Earth and several Big Finish plays, and co-created by Kettle (with additional material from comedian and actor, Miles Jupp).

Kettle is obviously a comedic writer and the cast of this play have a great time with the script. Out and out comedy can be dangerous. Most Doctor Who stories have humour, so making it the focus can seem like other aspects are lacking. Not so with this story. The very premise is hilarious. River is being tried in an alien representation of a 20th Century English courtroom, because it takes the longest. She is buying time in order to find out who killed the Duke of Ferrox.

Carnival of Angels by Roy Gill

This is the second Big Finish story to take advantage of New York being full of Angels. The Side of the Angels in Doom Coalition 4 sees the Eighth Doctor tackle them, as well as the Meddling Monk and other Time Lords. River should count herself lucky she only has to deal with gangsters with electric powers.

Timothy Blore’s Luke returns from Roy Gill’s previous story, Animal Instincts. He is one of River’s students, but she is trying to get him to step outside of her influence and make a name for himself. I wish we got to see more of River’s role as a professor, teaching younger students. People from her academic life pop up in these stories every now and then, so a boxset focusing on it would be lovely… Maybe another story with Benny too!

As may be obvious, Carnival of Angels is a prequel of sorts to The Angels Take Manhattan. River is in her Melody Malone guise, with her latest case being a man who has witnessed a death: his own. Thus begins a race across New York. Can River help this man outrun his own destiny?

It’s an intriguing premise and I have enjoyed Roy Gill’s other work, but sadly, the final story is my least favourite in the set.

River’s series continues to surprise me. She is certainly the break out character from 21st Century Who. Whilst I don’t think we will ever get a boxset that doesn’t mention the Doctor, it’s nice to see a series of stories without her husband involved. As this set proves, River is entirely capable of holding up the series by herself.

Can’t wait for her next adventure.

The Diary of River Song: Series 7 is out now from Big Finish. 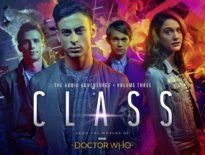 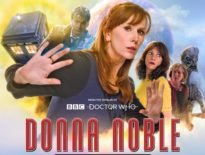