Set during Series 9 (before Sleep No More) and Series 4 (before Turn Left).

Saturday, 14th November 5063. The Doctor and Clara made their way through the crowded exhibition hall, slipping past as many attendees in Professor X cosplays; all of whom were die-hard fans of the series.

“Hey, that looks intriguing,” he said with the Scottish brogue, pointing towards the workshop with audio engineering equipment. “Only got a couple of hours to go until the special panel.”

“Are you thinking of making music for this Festival then?” asked Clara, wondering why else he would be interested in audio engineering.

“Ooh, I wish so,” he snickered. “But these guys here produce audio drama, by expanding the Professor X universe and other science fiction classics. Like adapting the Gerry Anderson puppet shows, reimagining The Prisoner, or recreating The Avengers lost episodes.”

Intrigued but still wondering what he wanted, Clara said, “Okayyyy, but what are you really intrigued about it?”

“Whenever you’re intrigued about something, it usually involves something dangerous that gets us both into trouble!”

“There’s nothing dangerous around here, so don’t upset the Ood.”

Clara turned to find an Ood servant pushing a hover-trolley, with exclusive Professor X memorabilia. She exchanged an awkward smile, unsure whether to greet him.

“Can I interest you in some souvenirs?” asked the Ood.

“Go on, go on,” the Doctor persisted.

The Ood began explaining each item on the trolley while the Doctor and Clara looked on. There were small badges, watches, picture magnets, and a Professor X handbook. Some of them appeared to be very different to what Clara had seen on Earth.

“I’ll take one each,” she said, fascinated by these peculiar items. “Think my Nan would like them.”

“For your friend, madam?” the Ood misheard her.

She turned to find that the Doctor was no longer present – he’d given her the slip. Rolling her eyes, Clara hastily gave the Ood a banknote before gathering the souvenirs. “Keep the change.”

Figuring out that the Doctor was at the workshop, Clara decided to head to the gift shop figuring that he would find her there afterwards.

Meanwhile, the Doctor had already taken his seat, just as the audio workshop presentation was starting. Little did he realise that a very old friend was also sitting right next to him.

The hosts began talking about which series they adapted and why, before playing a teaser for a Professor X full-cast drama. The speakers beside them produced a smooth but audible tune. Then the sound began to get faster and louder, with booming low waves followed by quick, high-pitched notes.

After a Q&A session with the audience, followed by a round of applause, the Doctor got up from his seat to give others space to walk out. It was only then he began to make eye contact with…

“It’s me,” he grinned, pointing both index fingers at himself with fascination.

“Surely I’ve seen you somewhere before. Am I dreaming?”

“Tell me, Earth girl, how did you end up here?”

Not too long ago, the TARDIS door quickly opened, revealing a puzzled Donna walking out.

“Huh,” she scoffed, noticing the venue decor appearing very familiar to her. “Where are we, Space Westfield?”

“More than that,” said her Doctor, locking the blue police box with his key. “Look around you, Donna. Planet Excel, named after the exhibition centre in London.”

“So, what’s being exhibited then?” asked Donna, wondering what was there to explore.

The other Doctor grinned and replied, “Professor X! Brilliant stories and many great workshops to check out.”

“Well then, Spaceman – what are we waiting for? Let’s check out the audio workshop first!” Donna began hurrying towards the action with the Doctor following her, amused by her excitement. “Then we could grab a bite afterwards. Hopefully something nice as those scones on Calibris—”

“Actually, Donna,” he interrupted, “I want to check the gift shop first to see what souvenirs and merchandise they have. I’ll join you when I’m done browsing. And a slice of banoffee pie is what I’m craving.”

“Sure, why not?” said Donna, then added, “Maybe you could get me something while you’re at it. Maybe a Professor X souvenir for Gramps too.” So, the two travellers went their separate ways, not noticing that another blue police box – with the St John Ambulance logo painted on the door – was parked nearby.

Later on, at the gift shop, Clara was browsing the holographic digital downloads of TV boxsets, films, audio CDs, books, and other Professor X memorabilia. She could only wish that Earth, back in the present day, had been able to afford to develop such advanced ownership beyond streaming.

“Right, thank you,” said the other Doctor, collecting some souvenirs after paying an Ood servant at the counter. Then he immediately bumped into his future companion who just walked past. “Whoa, sorry, didn’t see you there—”

A pause. Clara looked him in the eye and gasped, “It’s you!”

“I believe we have. Or maybe not yet? I dunno.” She remembered her previous Doctor explaining that his predecessors retain no memory of their encounters with any future incarnation(s). So she had no choice but to comply. “You do remind me of someone I once knew.”

“Well,” the other Doctor exhaled, “I say that’s… normal amongst strangers who look alike. Oh, never mind that. What’s your name?”

“Noble… that rings a bell.”

“Yeah, such a nice name for a laureate—”

They both turned to find Donna approaching them, with Clara’s Doctor following right behind. But the tenth incarnation himself was quick to assume…

“Lobus Caecilius? Is that really you?”

The twelfth incarnation suddenly burst into laughter and replied, “You’re looking in the mirror!”

The tenth incarnation stammered, “W-w-wait, you’re not saying that Caecilius is me?”

Then both Doctors nodded, grinning at their respective companions who introduced themselves to each other.

“Hang on a second… Where did you two meet? The West Wing, under the Obama-Biden Administration?”

“She’s right,” Clara agreed. “And I think the special panel’s due to start in a short while.”

So, the two Doctors and both companions had already moved on. Ahead of them was a big screen with people gathered in front of it.

“Oh look,” said the tenth, “It’s that preview I was hoping for.”

“A classic Professor X episode which has finally been returned to the archives. I’d like to see just how they’ve restored it. Fancy a look yourselves?”

Donna: “Why on Earth… I mean, why on this planet would they ever do that?”

Clara: “How is that meant to be exciting?”

“Well,” answered the twelfth, “Maybe we can all find out all that by joining the crowd. And who knows, it may be more than it appears to be…”

Knowing what the Doctor, or rather Doctors were usually like, Clara and Donna agreed that they should be making their way towards the special panel.

As both pairs of travellers walked down the hall of stands and shops, not one of them noticed a TV screen on one stand as it pixelated into a moving image of a young, blonde woman moving her lips as if she was shouting the same word over and over. If the screen had had its speakers working, they might just have been able to hear the woman calling, “Doctor!” But they never did.

Taking their seats in the auditorium, the Doctor put on his sonic sunglasses to make sure that nobody in the audience was carrying anything potentially harmful.

“Aren’t you gonna take them off?” asked his predecessor.

“You can say that again,” the Doctor chuckled, removing his sunglasses. “I mean, you will.”

On the stage, the main host, Tobias Haddock introduced the lead actors and the current Professor X showrunner – met with several rounds of applause. As they sat down on the individual couches, they each discussed the show’s production process, with banter to keep the audience entertained.

Already halfway through the special panel, the showrunner finally introduced what they were all about to see for the first time. In seconds, the lights went out.

On the screen, there were clips of Professor X in the midst of a galactic war. Like a conventional movie trailer, the captions were displayed in enlarged metallic fonts.

The main protagonist himself had a youthful appearance with curly ginger hair, which aroused some curiosity among the two Doctors.

“His face does remind me of someone,” the other Doctor whispered discreetly, with his successor replying, “I think he looks like my younger self, but ginger!”

IN HIS UNMADE EPISODE

WITH BIDDY, CLIFF, AND LOLA

“Those names are familiar,” the other Doctor added. “Did we ever travel with them?”

With a sudden roar of applause from the audience, there were some shots of Professor X and his companions up against an army of XTerminators.

“At least they’re not real – just ’60s style,” the other Doctor remarked, followed by his successor who asked, “Do they spin around in circles?”

As the trailer nearly concluded, there was a brief shot of Professor X addressing the camera, “There is something on your back.”

Donna suddenly had goosebumps and lost her train of thought. She recognised those words from her trip to Pompeii: was it all a coincidence, or perhaps some kind of warning?

Finishing with an explosive action sequence, the preview dramatically cut to black. The lights went back on, as the audience gave a standing ovation.

“Outstanding,” the Doctor gasped with amazement, as he and the others were already walking back to their TARDISes, “It’s like an adventure I can’t even remember!”

His predecessor turned to Clara and Donna. “What did you make of it, you two?”

“Yeah,” replied Donna. “Maintains the spirit of the Classic episodes, despite the original actors’ likenesses being recreated with digital effects.”

“That’s the thing about the TV and film industry, Donna,” said the other Doctor. “Always evolving as the decades go by, especially when remastering the old to improve the quality.”

Both Doctors were already distracted, excitedly rushing towards their beloved ships with their companions trying to catch up. While the twelfth incarnation went over to look around the old model, the tenth observed the current one’s familiar symbol painted on the front door.

“I never understood why the St John Ambulance logo comes and goes, whenever the exterior redecorates itself.”

His successor wondered, “Probably to remind us of something?”

“Come to think of it,” Clara interrupted, “The logo does symbolise who you really are.”

“A healer,” said Donna. “You save people, Doctor. Whether it’s a whole town or just a person.”

“Pompeii,” the Doctor turned to his predecessor, “You will later frown me this face.”

“And thanks to you, Donna,” his successor turned to his former companion, giving her a kiss on the cheek, “You made me better.”

She grinned. “My pair of dumbos.”

“Well, guys,” the other Doctor began, unlocking his TARDIS door, “It’s been a fantastic day hanging out, and I look forward to enjoying it all over again… with you, Clara Oswald.”

“Quite right,” Clara giggled, hugging him. “And you’ll be seeing me again much sooner than you think.”

“Oh, and been meaning to ask,” the Doctor turned to his predecessor, following Clara into his TARDIS, “Who created Professor X in the first place?”

With a final grin, “Who indeed?”

As they closed the doors, both TARDISes began to dematerialise simultaneously with the wheezing and groaning echoing across the venue. And the two travelling pairs were finally off on their next adventures. 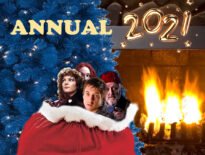 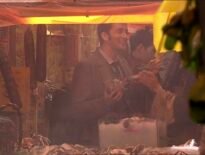