Michael Sheen the Current Favourite to Play the Fourteenth Doctor A former Doctor Who actor is favourite to become the Fourteenth Doctor — at least according to Radio Times readers.

After a poll to determine who should take over from Jodie Whittaker as the Time Lord, Michael Sheen won 20% of the vote. Sheen was the voice of House in The Doctor’s Wife and further worked with writer Neil Gaiman on The Sandman and Good Omens. His friendship with Tenth Doctor actor David Tennant led to the popular Staged.

Other names included in the top 10 according to the Radio Times include Jo Martin, who played the “Fugitive” Doctor in Series 12; Andrew Scott, aka Moriarty in Sherlock; Big Finish regular, Alexander Vlahos; Jonny Lee Miller, who played Sherlock Holmes in Elementary but who also appeared as a child in Kinda; and Kelly Macdonald, who proved popular after her starring role in Line of Duty.

Here’s that line-up in full:

Personally, I’ve never understood the hype around either Richard Ayoade nor Jo Martin; out of those 10, I’d favour Jonny Lee Miller, Andrew Scott, and Michael Sheen.

Would Sheen actually do it? Right now, he’s tied up with a second series of Good Omens, but presumably filming for Doctor Who Series 14 (which hasn’t actually been announced yet, lest we forget…) won’t start for a while yet anyway…

What do you make of that list, DWC readers?

Michael Sheen the Current Favourite to Play the Fourteenth Doctor

News Who Is Directing and Producing Doctor Who Series 1… 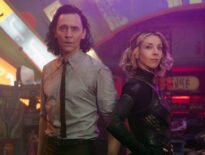