Former Doctor Who companion, Jenna Coleman, will star later this year in a new comedy-thriller, Klokkenluider, alongside Tom Burke.

The drama sees Ewan (Burke), a government whistleblower, sent to a remote country house in west Belgium alongside his wife and two close protection officers, as they await the arrival of a British journalist, Flo, played by Coleman. (And for those wondering, “Klokkenluider” is Dutch for “whistleblower”.)

Jenna, of course, played Oswin/Clara Oswald between 2012 and 2015, then appeared again, albeit very briefly, for the Twelfth Doctor’s swansong episode, Twice Upon a Time. Meanwhile, you’ll probably recognise Burke for playing the lead in the Cormoran Strike TV adaptations or as Athos in The Musketeers (the first series of which also starred Peter Capaldi).

Coleman has starred in a number of high-profile roles since leaving Doctor Who, including The Serpent, Inside No 9, Victoria, The Cry, and, on stage, All My Sons.

The movie is now in post-production, having been filmed under Covid guidelines in early 2021. It’ll be released sometime later this year. 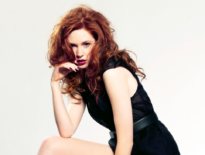