Emma Campbell-Jones (Cass from 2013’s story, The Night of The Doctor) guest stars in Battlegrounds, the penultimate boxset in The War Doctor Begins range. This time, the actor plays Layla Bridge, a brave and loyal friend to the warrior Time Lord.

In three full-cast audio dramas set in the tumultuous Time War, Jonathon Carley’s War Doctor is held captive on a Thal ship and faces an astonishingly vicious variant of the Daleks. But his biggest enemy of all might be himself.

The Doctor is no more. In his place, a warrior, finally joining the Time War between the Daleks and Gallifrey.

But how far will he go to end the conflict? What lines will he cross? How much of himself will he sacrifice?

The War Doctor is beginning to find out who he is…

And here’s what to expect inside:

The Keeper of Light by Phil Mulryne

At a remote costal cottage, holidaymakers David and Dorothy think there’s something strange about the lighthouse. But the Doctor can’t shake the sense of an even bigger mystery to solve…

Fighting alongside the Time Lords against their common enemy, some Thals have realised that this collaboration is not between equals.

When his new battleship is stolen, the War Doctor must convince his old allies that they are on the same side.

Lacuna is on the brink of destruction, attacked by a new breed of Dalek. But every day, it is pulled back from that brink, and everyone prepares to live through the end of their world once again.

One strange man, alone in his castle, holds the key to Lacuna’s ultimate salvation – or its annihilation.

“In Layla, we have someone who might have been ideally suited to travelling with the Doctor in his previous lives. She brings out his best qualities, and in some ways, she reminds him of some of his friends from the past.

“Emma Campbell-Jones is fantastic, and it’s wonderful to bring her back into the world of audio Doctor Who as a companion, but probably not the one you’re expecting!”

“I think Layla Bridge is a very passionate sort. She’s quite playful and I enjoy that funny little spur she has with the Doctor – the sparky bits and moments of back and forth. She clearly cares a great deal — not just for the Doctor — for everyone they meet along the way.

“She’s bold and I love her courage. She’s very hands on and is off exploring around the corner when she doesn’t know if there are monsters around there. I think the Doctor needs a companion who is unafraid and willing to go on the journey with him.”

The War Doctor Begins: Battlegrounds is available to pre-order at £19.99 as a CD box set or £16.99 as a download from Big Finish. Save money by pre-ordering the complete War Doctor Begins series in a bundle (of all four volumes) from £76 on CD or £66 on digital download. 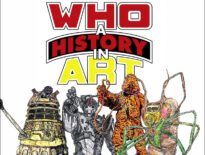 Merchandise Out Now: Who — A History in Art, a Personal …