Christopher Eccleston Returns for Big Finish’s The Ninth Doctor Adventures: Back to Earth Christopher Eccleston is back for a second series of boxsets for Big Finish’s The Ninth Doctor Adventures, starting this May with Back to Earth.

The Doctor will embark on three Earth-based adventures. He encounters a fairytale-esque villain, travels to Moscow in 1605 and, in the closing story, crashes a family’s New Year’s gathering.

Here’s what’s in Back to Earth:

“I thought the script was absolutely brilliant and I loved every second of playing Auntie Sue — she was right up my street. She’s a giddy, loveable, warm Northern lady who’s got bags of energy. I think she’s just me in about ten years.

“She really loves her family but she’s not afraid to say that she thinks the Doctor’s a bit dishy. Personally, I think Auntie Sue would completely run off with the Doctor around the cosmos.

“I was obsessed with Doctor Who as a child, I absolutely loved it. So, I’ve had a ball with Christopher Eccleston. It feels like we’ve bonded as people and as characters in a very short space of time.”

“Tim Foley’s Auld Lang Syne is a wonderful and really special script. I knew for Auntie Sue I wanted to cast someone who was grounded but also had that blousy hectic energy about them. Every line that Hayley Tamaddon said was so perfectly pitched.”

The Ninth Doctor Adventures: Back to Earth is now available to pre-order for just £24.99 (on CD and download) or £19.99 (download only), exclusively from Big Finish. The triple LP vinyls are strictly limited to a pressing of 1,000 per volume, and can be ordered at £35.99 each, or £132 for the bundle of all four albums.

Christopher Eccleston Returns for Big Finish’s The Ninth Doctor Adventures: Back to Earth Merchandise The War Doctor Gets a New Companion in Big Finish&… 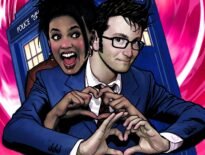