The Eisner Award-winning writer is best known for runs on numerous Marvel Comics, including She-Hulk, Silver Surfer, The Reckoning War, and Tony Stark: Iron Man, and is the current scribe on The World’s Greatest Comics Magazine, Fantastic Four.

This spring, Slott will finally tell a Doctor Who story in the medium, with an epic that sees companion Martha Jones captured by the insatiable Pyromeths; her only hope for survival is to keep them distracted with sensational untold tales of the Tenth Doctor facing off against his greatest foes – both classic and new!

“One of the worst secrets in comics is that I am one of the world’s biggest Whovians! I’ve been regularly watching Doctor Who since the Tom Baker years, and am deeply devoted to every incarnation of the show! I’ve been waiting to write stories for the Doctor my whole life! And I couldn’t be happier than getting a chance to tell an all-new tale of the Tenth Doctor – and to be doing this with Chris and all the fine folks at TITAN! Allons-Y!”

“I’m very excited to be working on this project with Dan – he’s a huge Who fan, and it shows. This Doctor Who special exudes all of Dan’s creativity and love of storytelling, with a few surprises along the way!”

Titan’s previous Tenth Doctor series was written by Nick Abadzis, a fantastic writer whose run was sadly cancelled when The Thirteenth Doctor comics were launched. Slott, however, is a fan of Abadzis’ work, particularly highlighting his indie graphic novel, Laika.

Doctor Who: Special 2022 from Titan Comics will retail at £6.99, and is expected to come out in May. 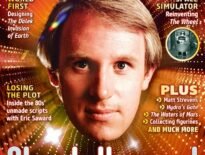