Christopher Eccleston’s Ninth Doctor will meet the Sontarans this August, in Big Finish’s upcoming The Ninth Adventures: Into the Stars boxset — but unusually, these Sontarans have evolved.

“The Sontarans are my favourite enemies of Doctor Who and I love this story. The idea of the most evil creature in the galaxy having an off-shoot which is the most peaceful, innocent, and loving is immensely moving and funny.”

Alongside the Sontarans, these audio adventures also pit the Ninth Doctor against an ancient trickster by the name of Jack Frost, and a circle of gamblers determined to beat the odds at any cost. Here’s the synopsis:

Distant worlds, alien cultures, vessels of exploration – the Doctor is never more at home than when he’s out among the stars.

But that’s where travellers face the greatest dangers, and where the Doctor’s help is needed most…

The three explosive stories in this box set are:

The Doctor happens upon an unusual outpost – and discovers it is about to be annihilated.

To save Salvation Nine, he must rally a people for whom war is an alien concept – and protect the future of the Sontaran race!

Last Of The Zetacene by James Kettle

The rich and the criminal rub shoulders on Stage Three spaceport – and play high-stakes games for valuable prizes.

The Doctor is always interested in endangered species, and the Zetacene is more endangered than most…

Break The Ice by Tim Foley

On a chilly space station, the Doctor meets a group of scientists experimenting with cryogenics.

But when one subject returns from extreme sub-zero temperatures, he does not return alone. A creature awakens that can freeze the soul with icy fingers – Jack Frost!

“The wonderful thing about Doctor Who is that there are so many tones and styles you can play with. If the previous Ninth Doctor box set was laced with heady emotions, then this one goes for fun and fear, running the spectrum between broad laugh out loud comedy and dark claustrophobic terror.”

The Ninth Doctor Adventures: Into the Stars is now available to pre-order for £24.99 (as a 4-disc CD boxset and download combo) or £19.99 (download only) from the Big Finish website. 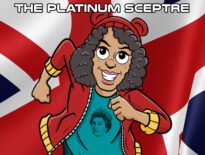 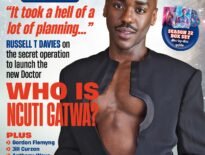