But no, Frank won’t be playing Perkins, the role he took in the Twelfth Doctor tale, Mummy on the Orient Express. Instead, Skinner guest stars in The Colour of Terror as Pete Snow, a nosy neighbour who gets roped into investigating a junk shop with the Doctor.

Alien threats come in many forms – and many different hues. A charity shop where customers vanish, a 1920s gentleman’s club besieged by giant plants, and a distant colony planet where death hides in darkness – wherever they manifest, the Doctor is on hand to fight every shade of fear…

“I loved the Ninth Doctor [on TV]. Chris was brilliant with an amazing energy. I was very sad when he left but I’m glad we’ve got that one series as it’s an absolute corker. Without him, I don’t think we’d have everything we’ve had since. It’s pretty exciting viewing Chris as the Ninth Doctor close up.

“I listen to Big Finish regularly and it’s great because it can take it anywhere. No-one ever listens to the same recording – we’ve all got our own versions [in our imagination] and that makes it very intimate. I’m a big fan of audio.”

“When Lizzie Hopley said she’d written the role of Pete specifically with Frank Skinner in mind, I thought we had to try! As Frank is a Doctor Who fan he said yes pretty much immediately.

“As soon as Chris and Frank met, they hit it off and you could see the mutual respect and admiration which was lovely to be around. Frank did admit to his Doctor Who passion. Chris is such a humble guy and he understands the love and affection people have for it. It was really good fun, with lots of anecdotes being told.” 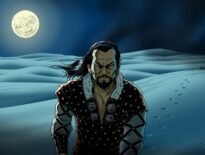 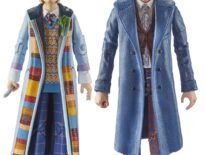