Happy 2023 From The Doctor Who Companion!

Happy New Year, dear readers, from everyone at the DWC!

2023 is an exciting year to say the least. Doctor Who will celebrate its 60th anniversary, and we’ve got a new/old combination of Russell T Davies returning as showrunner and David Tennant coming back as the Doctor. But don’t think that everything will run as expected: Tennant isn’t the Tenth Doctor again; nor is he the Metacrisis Doctor. He’s the Fourteenth Doctor, with Ncuti Gatwa coming in later this year as the Fifteenth.

Not only that but Doctor Who will be coming to Disney+ around the world (but will stay on the BBC in the UK), so that’s a serious vote of confidence from the House of Mouse.

We know we’re getting three specials in 2023, which does seem a tad sad, considering it’s a celebratory year, but David knows what he’s doing, so let’s have faith that Doctor Who will take over the world again, as it did the show’s 50th anniversary in 2013.

Speaking personally, I hope the upcoming eras revive my love of the programme. I know everyone has times where they drift in and out of Doctor Who (heck, even Peter Capaldi admitted to falling out of love with it for a time), so fingers crossed I feel like the show connects with me again. 2022 has been an odd year — lots of good and lots of bad, but I guess that’s always the way, isn’t it?

I’m not one for New Year’s resolutions generally (they always boil down to “be a better person”), but I know I aim to simplify my life in some ways in 2023; in other ways, I aim to take more stuff on. Hopefully, I can make it through the muddle and report back in 2024 with fresh outlooks. So what about you, DWC readers? Do you have aims for the next 12 months? What are you most looking forward to in 2023?

Whatever happens, the DWC will be there with you, a companion every step of the way.

Happy 2023 From The Doctor Who Companion! 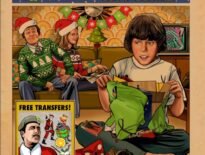