Pure, unadulterated, good old fashioned fun.
If there’s one sentence that could possibly sum up The Diary of River Song, six words that you decide to take away from this review, then those are the best to walk away with.
In fact, this reviewer will go as far to say that The Diary of River Song is a tremendous triumph for Big Finish, one that everyone should be incredibly proud of. Stand up Alex Kingston, Jenny T Colgan, Justin Richards, James Goss, Matt Fitton, Paul McGann, and everyone else involved in the production of adventures for the Doctor’s wife: Series One is an utter delight.
Starting with a bit of tomb-raiding in the early twentieth century as River tries to cool down from the tumultuous ride that has been her life so far, then having to head out to the stars for a murder mystery at a fabulous party, meeting her future husband and then meeting him again for the grand finale, this new series has everything a fan of River Song, Doctor Who and Big Finish stories could hope for.
In fact, I was ever so slightly worried when this release was announced. River’s timeline is vast and exotic, chaotic and backwards and deliciously complicated. Whilst that works well within the parameters of Doctor Who on television and her adventures with Doctors Ten, Eleven, and Twelve, how would her story translate onto audio? Would we be left with a mess of interweaved timelines, backtracking and, once it was announced that the Eighth Doctor would be making an appearance, convenient memory loss? Thankfully, no. The focus on this first series is that River Song is very much her own person with her own life to live and her own path to follow. The fact that the Doctor gets involved towards the end of the proceedings feels very organic rather than forced. 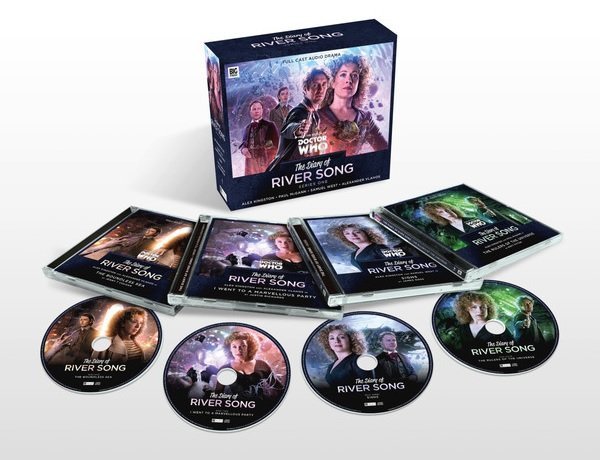 River’s four audio adventures come together from separate parts in order to serve a greater narrative over this boxset, one that unfolds beautifully with a great number of twists, turns and subtle timey-wimeyness. There’re character mysteries to solve here as well as the enigma of (shh, spoilers) the Spore ships, all of which culminate and pay off in the ‘finale’ to this piece, The Rulers of the Universe. This, of course, is the story that will entice listeners the most as it is where we hear the meeting of the Eighth Doctor and River. Or do we? It’s handled well, that’s for sure. Not over egged or overplayed, this incarnation of the Doctor wades into the arena and struts his stuff as very much a supporting character; those that were concerned that River would end up side-lined needn’t be, she remains the star of the show.
What’s perhaps one of the most satisfying aspects of The Diary of River Song is the very subtle references to her televised adventures and the Universe they inhabit. Rather than large, glowing, neon signs of continuity that audiences were, perhaps, overwhelmed with in Series 9 of Doctor Who, Big Finish throw in small asides that pay off for long termers such as yours truly but can be totally ignored by those newer to the show. Mentions of River’s past, especially her adventures with the Eleventh Doctor, are whispered briefly rather than announced. Mentions of the Time War as fleeting, the Doctor is clearly outside of events here – nearing his fateful crash landing on Karn but by no means about to head to it. This works well, and gives everyone a chance to embrace this as a fully-fledged, living and breathing series of its own volition rather than just another ‘Doctor Who spin off’.
So, what’s the overall verdict on a series of stories entirely based upon the adventures of River song?
Sublime, fresh, engaging, inviting, funny, sad and exciting.
Ok, maybe you should take away thirteen words with you instead of one sentence. Whatever you decide, make sure the decision ends with the purchase of this boxset.
The Diary of River Song Series One is available to buy on CD or via download from Big Finish now; it’s still at the web-special price of £20! It’ll also be available from Amazon

in just a few days’ time.