I’ve made no secret of this: the Doctor Who: The Complete History collection is my dream partwork. Forget figurine collections and DVDs of stories I already own; I want books. Beautifully-designed, compelling books, full of in-depth information – and focused on Doctor Who too.
But now that it’s finally happened, courtesy of Hachette, does the reality live up to the dream?
Issue 1 – actually Volume 55 in the whole series – looks at four Tenth Doctor serials, five episodes in total. You can see why they’ve started with David Tennant; he remains an ever-popular incarnation of the Time Lord. The stories chosen, however, initially seem a bizarre way to kick off the collection: my money would be on Human Nature/ The Family of Blood, and Blink, or maybe the overrated Series 4 finale, and frankly, I can only wonder when they’ll release the volume covering The Day of the Doctor (the final issue, I reckon).
No, they’ve gone with Gridlock, Daleks in Manhattan/ Evolution of the Daleks, The Lazarus Experiment, and 42. Hardly fan favourites, although I do maintain that all five are very unfairly overlooked. This volume actually perfectly illustrates my point and justifies why this partwork will continue to be a definitive, enlightening work.
After Introductions written by editor, John Ainsworth, looking at why a story is important to Doctor Who‘s ongoing tale, and full synopses of each episode, accompanied by images, the sections are thorough and focus on all aspects of the serials, including Pre-Production, Production, Post-Production, Publicity, Broadcast, and Merchandise. This is followed by complete Cast and Crew Credits, and a Profile of a specific actor: for Gridlock, we get Anna Hope (Novice Hame); Miranda Raison (Tallulah) for the Dalek two-parter; Adjoa Andoh (Francine Jones, aka Martha’s Mum) for The Lazarus Experiment; and Michelle Collins (Kath McDonnell) for 42. 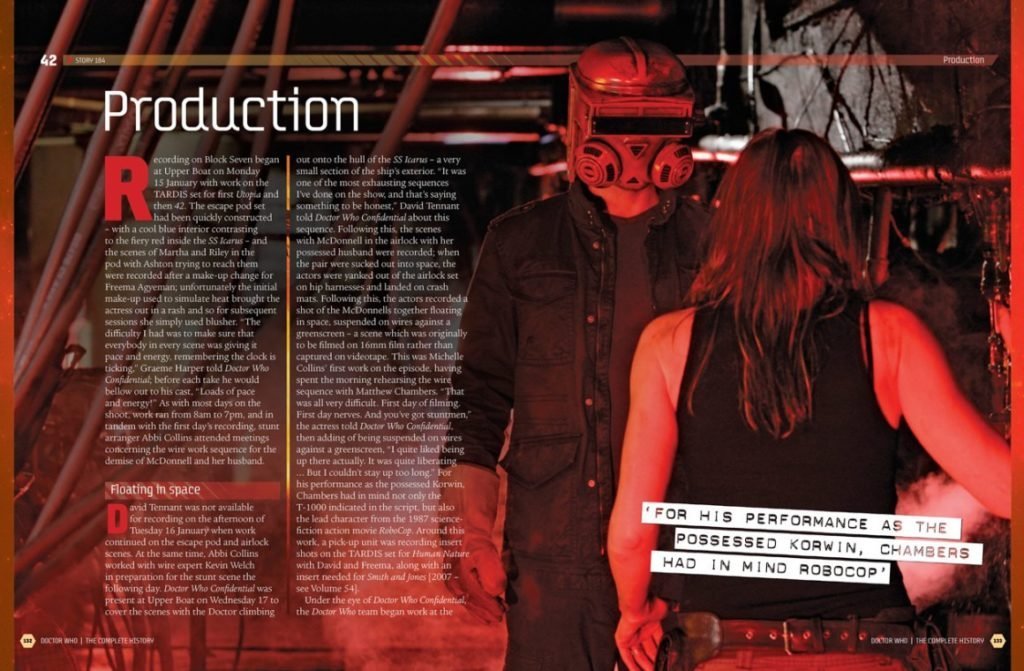 DWC Contributor and former K editor, Christian Cawley noted the other day that “nobody sets out to make a bad TV show,” and this really shines in The Complete History. The meticulous and loving detail put into every scene is exceptional, and gives you a new outlook on even stories left at the bottom of the heap in polls. The next time I watch these particular episodes (likely in the next fortnight), I’ll have an entirely different appreciation of them. It makes each tale interesting and somehow fresh.
And that’s wonderful.
Maybe another reason these stories were chosen to signpost this new partwork is because of their range in tone. You’ve a thriller in 42, and religious allegory in Gridlock and The Lazarus Experiment. Daleks in Manhattan gives historical depth and Evolution of the Dalek is all about show and the tainted glamour of 1930s America. Each tale has a different colour scheme too, so it remains engaging.
Facts and figures, trivia and detail, have the potential to seem stuffy and overwhelming; fortunately, there’s a wit and charm to the text: it, for example, notes that The Lazarus Experiment was “broadcast, rather aptly, the day after Boots started selling their much-hyped anti-ageing cream No7 Protect & Perfect Beauty Serum.”
The lavish, warm interior art also helps give a distinctly enjoyable feeling. Eye-catching and stylish compositions adorn the title pages of each serial, and this first issue comes with a full-sized poster of Daleks in Manhattan/ Evolution of the Daleks – an odd choice, perhaps, but the montage itself is glorious. The latest Doctor Who Magazine has the art for Gridlock and next issue’s The Daemons as mini-posters, and I can’t see anyone arguing that further additional prints should follow in subsequent issues of DWM (or to Complete History subscribers, even).

Elsewhere, we get high-quality images from each episode, although this reader would like to see more behind-the-scenes photos too, especially art (this volume has a sole example of concept art of the New New York motorway).
The layouts are clean and while repetitive, different enough to keep you engaged. You might primarily be buying this to get encyclopaedic knowledge of Doctor Who, but the design makes the whole package a real pleasure.
And you really do find out new things, even if you do consider yourself an expert. The list of things I learnt would be too extensive, but here are just a brief few:

The volume details tone meetings, filming schedules, locations, how characters and places were described in the scripts, when press and Doctor Who Confidential were also on set, pick-up shots, CGI additions, ratings… Oh, basically everything you need to know. Possibly most pleasingly, the Post-Production sections detail deleted scenes, whether they’re included on DVD/Blu-ray releases or not even filmed. Not sure where a location is? Check out the Production sections, which tell you the exact filming locations, on what dates the crew were there, and what they doubled as. I didn’t quite realise before the extent to which the main cast flit between episodes, and how they really must know each script (and their character developments) inside-out. It’s massively impressive.
The Merchandise sections, unfortunately, are the most repetitive here, but that’s essentially because they note DVD boxsets and vanilla releases – which, for these serials, is the Series 3 set. There’s a distinct lack of action figures, bar a couple of odd releases in the late 2000s. Nonetheless, it’ll prove to be a fascinating section when it comes to Classic Who merchandise, so we’ll see how that works out.
All in all, I’ve no qualms at all in not only recommending the volume to all Whovians, but also in subscribing. This is a stunning book, and it’ll form an immersive and – yes – definitive collection. This first issue is £1.99, so see for yourself. You won’t regret it.
NEXT: COLONY IN SPACE, THE DAEMONS, AND DAY OF THE DALEKS!
Want to subscribe? Head over to the Doctor Who: The Complete History site – and don’t forget about the premium subscription offer too!
(Originally appeared on Kasterborous Sept’15)

by Philip Bates time to read: 5 min
Big Finish Reviewed: And You Will Obey Me
Reviews Reviewed: Doctor Who and the Web of Fear by Terran…
0
%d bloggers like this: