Reviewed: Doctor Who and the Web of Fear by Terrance Dicks

Out of the two serials that made their wonderful, miraculous return to us in 2013, it’s The Web of Fear that felt more representational of what Doctor Who was about.
That’s no slight on The Enemy of the World. It’s very much trying to break with tradition and give us Doctor Who at its least formulaic – the show still has these bouts of experimentation and they’re always welcome, despite occasionally missing the mark (I’m looking at you, Sleep No More) – and boasts a commanding duel performance by Patrick Troughton.
While those boundary-pushing serials make good on the promise that you can drop the Doctor into any genre and still have the show retain it’s unique sensibilities, it’s serials like The Web of Fear that are truly representational of their age. This translates to lots of lovely scenes of the Doctor and a band of survivors – each with their own entirely believable responses to the horror awaiting – fighting an ever creeping menace in a wonderfully evocative location. Sure, it maybe superficial and given the characteristic abrupt ending, perhaps promising a little more than it delivers but these are the stories that shaped Doctor Who’s standing as the best delivery system for straight-forward sci-fi/horror thrills.
A lot of The Web of Fear’s legacy of handed down pop culture memories still retain their power in large part thanks to Terrance Dicks’ wonderful novelisation.
It’s easy to overlook just how strange this story is; it’s a kind of surrealistic nightmare assembled from fragments of our collective heritage: The impenetrable darkness of the London Underground, the choking, ever-creeping web engulfing even the stoutest of soldiers, an unseen omnipotent force bending men’s will with glee; then there’s the entirely unnatural infestation of robotic Himalayan Yeti – who’s piercing eyes and hulking frames occupy the shadows like the rats of the Northern Line. 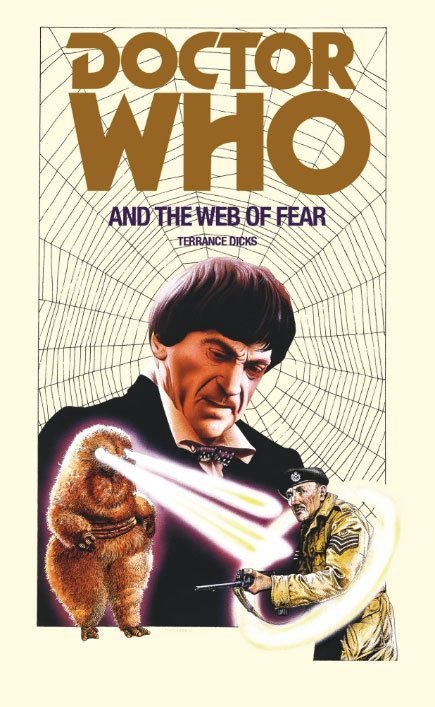 Judged separately from its place as a strange cultural landmark – a lot of the contemporary reviews of the returned serial tended to view the triumphant return of this artefact in much the same way we deal with older sci-fi movies, what scared us then isn’t necessarily what scares us now, and The Web of Fear always felt like a strange example to make of this trend, being as it’s confounding, unique mix of monster, location, and tone are entirely idiosyncratic – Dicks’ adaptation of Meryvn Haisman and Henry Lincoln’s teleplay is a master class of kinetic, horrifying brevity.
The prose never rises to the challenge the imagery presents; instead, we get wonderfully direct phrases like:

“The Yeti stepped off its stand, following him. Its features blurred and shimmered before his horrified eyes, becoming even more fierce and wild than before. With a sudden shattering roar the Yeti smashed down its arm in a savage blow.”

Dicks’ matter of fact delivery operates in much the same way David Myerscough-Jones’ Web of Fear sets seem to harbor unnatural shadows; he leaves the imagination to fill in the gaps with the merest frightening suggestion.
In fact, one of the weaknesses of the serial is the odd sense of to-ing and fro-ing which instead of feeling like a lot of padding, gives the book an uneasiness – you’re never quite sure of the distance between the relative safety of the base and the menace beyond – other than perhaps a tube map – and here, its quietly unnerving. It’s something that plays well with the growing suspicion in the camp that someone is not who he seems.
One of the strengths of the book is just how Dicks applies the tension to already simmering personal relationships within the camp; Doctor Who returnee Anne Travers doesn’t trust the delightfully weaselly journalist Chorley, Commander Knight doesn’t trust the scientists, and, as usual, the Doctor, Jamie and Victoria have a hard time trying to explain how they got there.

The cowardly Evans, adds another layer of distrust purely by his natural inclination towards running from any danger; his alarmist tendencies rule him out of anything sinister but that doesn’t mean the characters jump to the same conclusion just as quickly.
Tensions simmer quite nicely up to the big reveal of just who the Great Intelligence had been manipulating for his own nefarious deed – the suspension of disbelief required to accept just who’s been under control is a little beyond the text considering that a) the character was dead which raises more questions than it answers – especially when you consider they’re supposed to pass unnoticed, and b) the Great Intelligence had already briefly inhabited the mind of another, begging the question: why bother just picking one person at all?
Regardless of these minor complaints, there’s much to recommend here and it isn’t just the horror that impresses.
One of the loveliest moments is a passage of pure fan service that, if not for the way it evokes fairy tales of old, would seem self serving. It’s the moment when the Doctor meets Colonel Lethbridge-Stewart for the first time ‘as historic an encounter as that between Stanley and Doctor Livingstone’ and it’s worth taking a moment to read – if only for how Dicks neatly punctuates the moment within the on going plot (although it’ll require some mental gymnastics to even being to contemplate Lethbridge-Stewart as a potential enemy – so much so that Dicks doesn’t even try).

“Promoted to Brigadier, Lethbridge-Stewart would one day lead the British section of an organisation called UNIT (United Nations Intelligence Taskforce), set up to fight alien attacks on planet Earth. The Doctor, changed in appearance and temporarily exiled to Earth, was to become UNIT’s Scientific Advisor. But that was all in the future. For the moment the two friends-to-be glared at each other in mutual suspicion.”

As doffing your cap goes towards a moment in the past of pure inspiration – on the strength of this serial it’s no wonder the production team sought to replicate its thrills when they came to consider the future of the show – it’s a gloriously nostalgic.

Reviewed: Doctor Who and the Web of Fear by Terrance Dicks