During the noughties, there were a series of Sci-Fi books that dealt with an imagined perversity amongst the upper classes for ‘re-sleeving’; a sort of post humanity fantasy where by the rich would pay through the nose for immortality by ‘downloading’ their recently departed consciousness into a new, usually bespoke body.
Perhaps the most fun of all these books was Richard Morgan’s Altered Carbon. Coming earlier than either Charles Stross’ Glasshouse, Cory Doctorow’s Down And Out In The Magic Kingdom (an honourable mention should go out to David Brin’s Kil’n People for its imaginative, one day only, colour coded Golems), the book does what the best noir novels of Raymond Chandler and Dashnell Hammett do; take a seemingly disconnected case and spins it out into a wider socio-political tale of how the rich (in this case known as Methuselahs) have exploited the poor for their own nefarious and self-sustaining needs.
Why Morgan’s is so much fun is that it simply reads like it’s the last book he’ll ever write and he has no choice but to spool every idea down on the page – there’s something about facing the end that brings out the best in these novelists.
That too can be applied to the final issue of the Eighth Doctor mini-series, A Matter of Life and Death. It, too, is concerned with the post-lifestyles of the rich and shameless but in painting its indulgences, the issue does something quite novel. Rather than have the replacement bodies simply be empty, bespoke vessels, the issue gives them a voice. 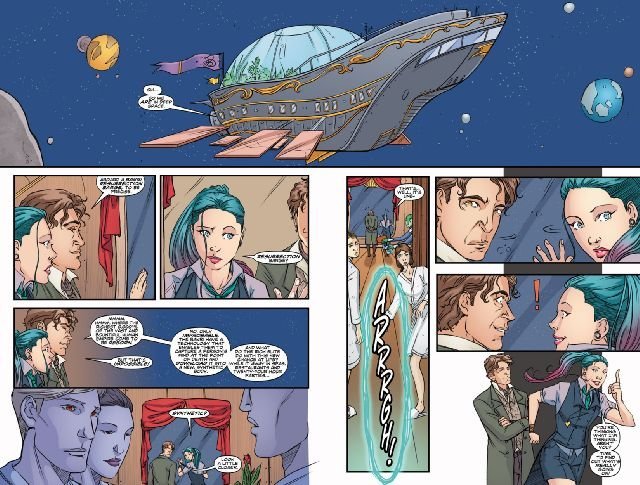 Arriving on board a Bakri Resurrection barge, the Doctor and Josie find themselves in the wrong place at the wrong time when a murder threatens to tear down the fragile peace between the rich patrons of this floating ornate barge and their newly sleeved bodies.
You might say that this sounds strikingly familiar to The Zygon Invasion/Inversion from Series 9 in its focus on the suppression of secret identities but the mini-series hasn’t been shy in aping its television counterparts beats before. Much like that two parter, there’s a rousing speech by the Doctor that neatly dovetails a lot of the insights into his character; we finally learn that for all his frustration at the seemingly endless conflict his life tends to bounce from, he’s an eternal, thwarted optimist. It’s only when the big revelation comes (and it’s a doozy), and the personal stakes are upped that the Doctor has to succeed – if not for himself but also for another incarnation who just so happened to have orchestrated their companionship.
For the Doctor, the outcome represents a reprieve of sorts – a constant living reminder that he has and continues to do good (and considering what we know of the future of this incarnation, that’s particularly poignant). For Josie, it’s a second chance at life, one free from the tyranny of living under the constant suppression of her rich counterpart –  it’s very much the fairy tale that first adventure promised it would be.
It goes without saying that Emma Vieceli’s artwork is up to its usual impressive standard. There’s a two panel gag involving the Doctor and Josie hearing what sounds like an adventure starting behind them, complete with exaggerated punctuation too, some bold anime style key character poses that burst through the panels (and in one instance, a heartbeat monitor ratcheting the tension behind them), and even some inventive hair-based frames too. 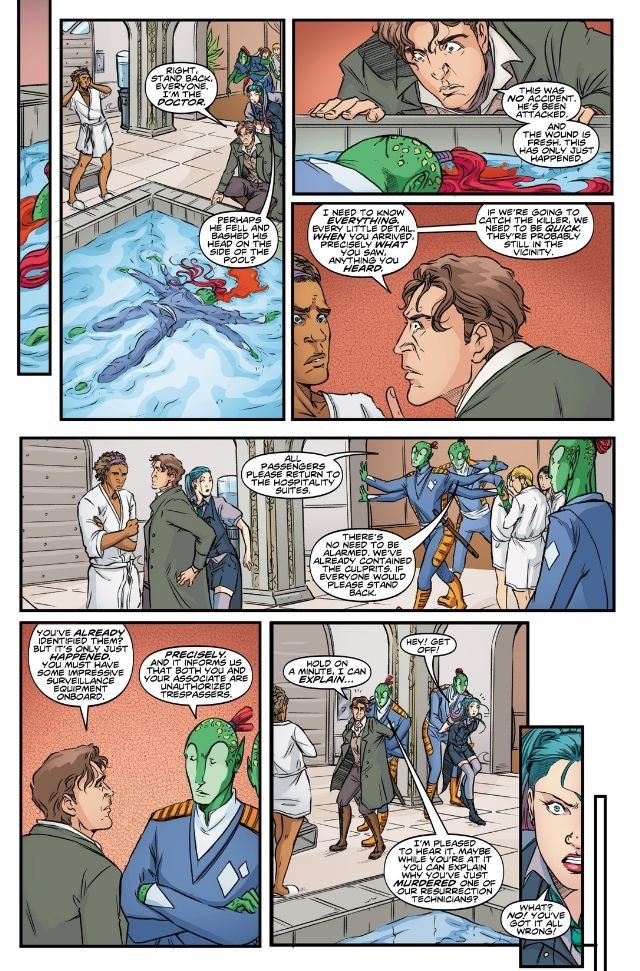 The bubblegum visuals do two key things very, very well and I’ve not really spoken about them before. The first is related to the panelling, I just love the way the background drops out occasionally and lets the characters tell the story – it’s like a play where the mise en scène is simply one coloured backdrop and a few key lights. It’s such a simple, bold decision but it gives the comic a dynamism all of its own.
And perhaps the subtlest of all, there’s very little shading in this mini-series – giving the world a bright, effervescent hue with hardly any pronounced shadows. Combine that with the simple backgrounds, you start to see why the characters stand out. In minimising and expanding the worlds behind the Doctor and Josie, you let the characters’ bold poses tell the story – throw in a few heightened manga-style backgrounds here and there for good measure and the book really starts to pop.
However, unlike the previous issue, the artwork is more than matched by George Mann’s witty, inventive and challenging script. Mann’s tale is more measured than Morgan’s debut novel but you get the feeling that, given that this could very well be the last chance to write the Eighth Doctor in this medium, he’s enjoying every secret revealing moment of this finale.
Given a surprising conclusion to draw towards seems to have galvanised what was starting to feel a little rote and by the numbers; these are big themes and grand ideas told with a flair that neatly caps what’s been an enjoyable jaunt with the Eighth Doctor and his new companion.
Let’s hope it’s not too long before we hear the familiar wheezing, groaning sound of his TARDIS again.
You can get the complete Eighth Doctor mini-series, A Matter of Life and Death now from Amazon.