Yesterday, your senses were assaulted by an aggregate of Cryons, giant numbers, and Peter Davidson. You’re clearly a glutton for punishment as you appear to be back for more.
Doctor Who Magazine has a fairly good hit-rate when it comes to covers, but there are a few issues that make you wonder if you’ve been pulled into another dimension, one where everyone constantly reminds everyone else that art is subjective, y’know.
Throw yourself at some comic boxes and swim in the giddy joy of odd covers. 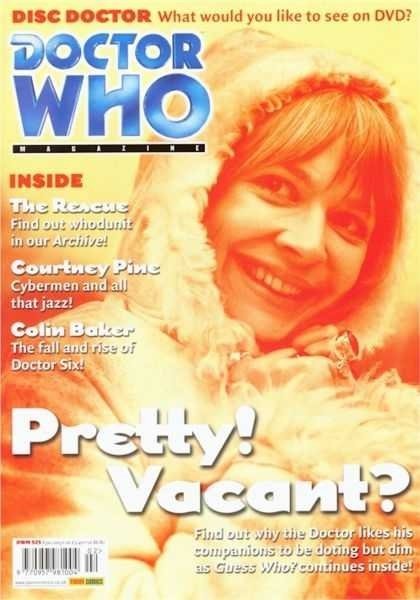 Jo Grant: nice but dim.
Following #324’s proclamation that a spectacled Seventh Doctor had “Specs Appeal”, the DWM crew decided not to have a photo of McCoy playing the spoons on Kate Mara’s chest accompanied by the caption “CHAUVANISTIC PIG”. Instead, they went with “Pretty! Vacant?” and a grinning Ms Grant. Smooth.
In December 2002, at various newsagents across the country, former companions of the Doctor strolled around and chanced upon the latest issue of DWM. And upon seeing the cover…
“What?” Louise Jameson (probably) asked.
“WHAT,” Sophie Aldred (probably) exclaimed.
“Ah, so I see my visage is being used as an example of how some companions appear to be of less sound a mind as others. While I object to it, in principle, I concede some writers portrayed Jo as a bumbling, foolhardy, asinine, fatuous, imbecilic fool, but the character does not typify my peers. I do, however, admire the composition of the image and the delicious wordplay, which stands out beautifully against the luscious cream used to evoke a glorious sense of nostalgia in its considerable readership,” Katy Manning (without doubt) replied when a shop assistant at WHSmith asked if that was, indeed, her on the cover. Manning also purchased a £1 bar of Dairy Milk, but turned down the offer of 12 Sharpies on the grounds that no one ever uses all those colours. Thanks to Photoshop, the DWM team replaced cutting and sticking with copying and pasting, and actually produced a series of stunning covers to show off their Series 1 coverage. They were exciting, dynamic, and all-round appealing.
This was an immensely thrilling time. The magazine had an increased audience; indeed, #355 was my first issue, and I loved it. I revelled in the joy of not only finding a regular title dedicated to a show I’d suddenly discovered was exactly what I was missing from my Saturday nights, but also that it was widely stocked. Seriously, where I live, you’re lucky to find a copy of the Radio Times. (That’s a lie, but you get the point.)
Looking at back issues, I discovered a wealth of irresistible monsters including Daleks, Sontarans, Cybermen, Skaroth, Zygons, Axons, and the Moxx of Balhoon. Did you spot the weakest link there? That’s right: the alien from The Time Warrior the Moxx.
I get that they couldn’t reveal too much about the series, but were readers really convinced that the so-called “Blue Meanie” was an effective threat? I mean, I love the little fat fella, but I don’t think his catchphrase “we’re going to die!” is as terrifying or catchy as “Exterminate”, “Delete”, or “I think you all appreciate the irony that, in providing these tributes for us, the planet Aneth has given us the power with which we shall re-conquer them and from there go on to build the Second Skonnos Empire.”
Fact fans: the Autons have never appeared on the cover of DWM – probably – so this would’ve been the perfect opportunity. Instead, we get a B-Lister (sorry, Moxx). The Classic Series equivalent would be showing a Shrivenzale in all its toothy glory. 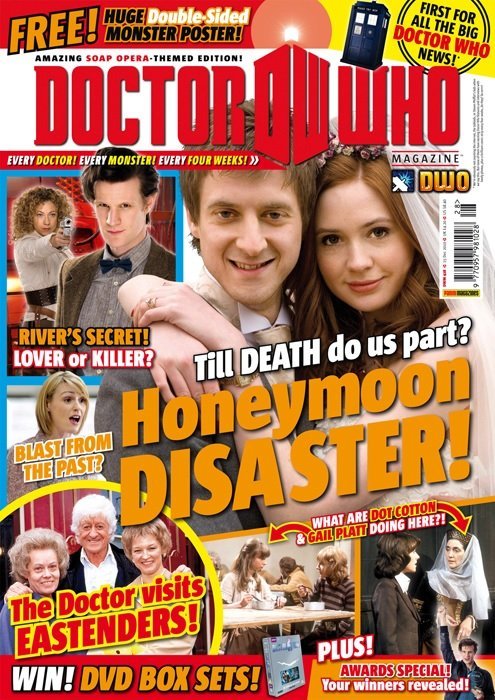 Fresh off the printing press, advanced copies of DWM landed in the laps of staff at BBC Wales. Steven Moffat marched up to editor, Tom Spilsbury, thrusting the magazine at his chest, a mix of anger and disgust over the Moff’s face, and said, “hide your shame.”
And so #428 was sent out to newsagents in bags, covering the entirety of the issue. Why? Simple. DWM had been soapified.
But fans didn’t need to get themselves in a lather (no?) because it was only temporary, like the death of Dirty Den. Also like the death of Dirty Den, it was all Dot Cotton’s fault. Oh yeah, we can see through your holier-than-thou exterior, you chain-smoking wrong-doer. I even hear she murdered her best friend, Ethel. (That all sounds very strange, even for EastEnders, but just think how anyone who doesn’t watch soaps feels right now.)
Look, it wasn’t that bad. The issue was entertaining, injecting something unique into DWM’s regular monster-centric scope. But it was also weird, wasn’t it? It even looked like Matt Smith was punching Dot in the chest. He’d clearly just heard about Ethel’s Willy.
I can forgive Spilsbury for his indulgences, however; after all, he did give us #423, my favourite cover ever – the crack in time one. 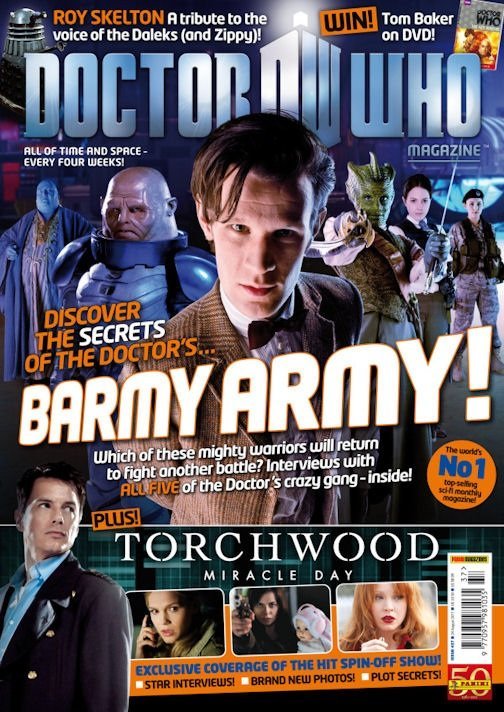 I remember the hairs standing up on my arms as the Doctor took over Demons Run without a single drop of blood spilt. It was fun and breath-taking. The coinciding DWM cover should’ve been equally dramatic. I’m thinking, the Doctor staring down at the ground, lit solely by his sonic screwdriver, against an all-black background. The headline simply reads “Demons Run When A Good Man Goes To War.”
Actually, we get a jolly Doc leaning towards the reader accompanied by a menagerie of aliens: Strax, Vastra, Jenny, Lorna, and Dorium. The headline? “Discover the secrets of the Doctor’s… BARMY ARMY!”
I recall seeing the cover and going, “‘Barmy’? That’s what they went with? ‘Barmy’?!” How about “eclectic”, “ragtag”, or “like, totes random, innit”?
I simply do not get it. At all. I guess they were going with “light and fluffy” while I think it should’ve been “dark and enticing.” It’s such a shame because it was the only loose link in the Series 6 covers. “Wed or Dead?” was perfect. The interconnecting Impossible Astronaut ones were superb. And that one with Karen staring straight at us against a stark white? Wow.
As if “barmy army” weren’t enough, we get a banner advertising Torchwood: Miracle Day covering half the main image. Sorry to mention Miracle Day – it just won’t die, will it? – but if they were determined to promote that, it should’ve been at least granted a full cover. Fans were excited about it in July 2011, and loads of people worked tirelessly on it, so at least give them proper coverage. Let’s get this straight: the cover for #493 is wonderful. No, I haven’t forgotten the topic of this article. I’ve not been distracted by Jenna, dressed as a waitress looking really quite beautiful. Well, I probably have but that’s not the point.
The point it, they might as well have put a photo of Clara, victim of the Quantum Shade, fallen to the ground of Trap Street, with the caption, “DON’T WORRY – SHE’S NOT DEAD.”
Back in 2011, Spilsbury got a whole heap of unfair grief for the four covers (The Eleventh Doctor, Amy, Rory, and River in Utah) exclaiming “One of them WILL die in the amazing season opener!” This was considered, to some, a spoiler, even though it doesn’t spell out who would(n’t) bite the bullet. (It was left to the BBC website to spoil that, just hours before transmission.) But it was unfair: it wasn’t a spoiler. It was a teaser. Semantics, eh?
#493, though, is a bit of a spoiler. Okay, so many of us had seen snapshots of Jenna in the waitress outfit from filming, but there are still swathes of fans who don’t seek out pictures on the internet; these people just want to enjoy their favourite show unspoiled, but are dedicated enough to pick up DWM regardless. After Face The Raven, we were left going, “we’ve not seen her in Eddie’s Diner – she must be back next week.”
Indeed, she was. But not in that outfit. She was swearing at the Doctor. As you do. Because when Moffat promised “New Adventures” for the Doctor and Clara, he actually meant the Virgin novels. We had to wait until Hell Bent to see her tempting the Doctor into twanging his guitar.
Here’s the thing, then: I love the cover to #493, but it niggles at me, like a song that won’t go away. (Cynics might think I’m talking about Alex Kingston’s character here.) 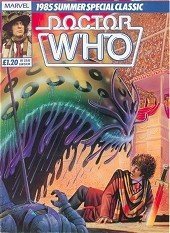 Mind you, I also love the Winter Special 1982 cover, which promises an interview with Jon Pertwee, and features on the Radiophonic Workshop, Panopticon, The Invasion, and Frontier in Space… but a photo of Peter Davison taking a pew in Snakedance takes up the main image – despite neither that serial or the Fifth Doctor era in general being mentioned. I get the point of it – show relevance and get an audience by displaying the current Doctor – but it’s nonetheless a little strange.
That’s it for now. And aren’t you glad? It’s painful to take the mickey out of a beloved part of fandom, but sometimes, it’s just got to be done.
500 issues; 10 dodgy covers. That’s not a bad average at all.