Many of us just pick up Doctor Who Magazine no matter what’s on the cover – but a catchy front page always helps, doesn’t it?
And while the majority of them have been pretty darn great, there are a few that’re just a bit… odd. Oh, don’t get me wrong, we love them for all their oddities, but what must the person behind the till think when we try to pay for a magazine, while its selling point seems to be a nonplussed companion?
So join me as I flick through the past 500 issues of DWM and stop from time to time to go “eh?” 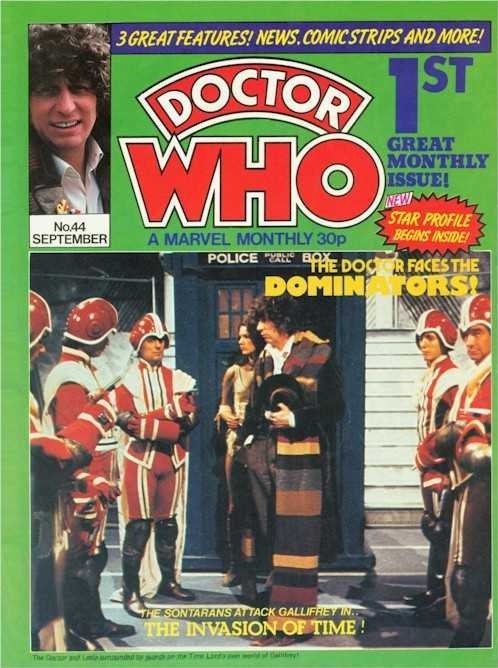 I can forgive many of the zanier covers from DWM’s early years, largely for nostalgic reasons.
#37 was advertised as a “SPECIAL MONSTER ISSUE” and showed the dullest bunch of aliens to grace Doctor Who (with the exception of the ambassador from Alpha Centauri). #39 tries to make spaceship models seem thrilling by including a small photo of a grinning Fourth Doctor. But I cannot forgive #44.
This was the first “great” monthly issue, which must’ve felt like an inevitable kick in the teeth to fans who had been avidly picking up the weekly (and then fortnightly) mags for the past year. But the biggest insult is the photo from The Invasion of Time in which literally everyone looks close to death from boredom. The headline promises Sontarans on Gallifrey, but readers are instead presented with a bunch of lacklustre Time Lords standing idly around the TARDIS as the Doctor and Leela (both disgruntled) step out, and frankly, it’s – –
Oh wow. I just described The Invasion of Time in its entirety, didn’t I?
Even the extra photo to the top left shows Tom Baker’s saddened smile as if the production crew are saying, “look, we’re trying our best, okay? Just give me your 30p.”
Fortunately, the magazine also promised the Dominators so you knew the rollercoaster ride was about to hit a new level of fun. 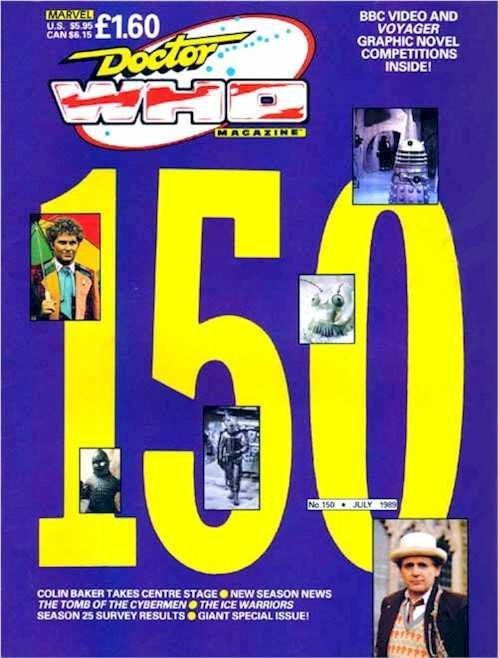 I still don’t understand the thought process of whoever made this cover. #150 is a big deal, and indeed, this stood out on the shelves. But, uhm, it’s bizarre. I’m pretty sure a Not-We planned it, but he was somehow related to editor, John Freeman, and if he didn’t get his own way, he’d tell his mum Freeman had been mean to him.
I feel the planning meeting went something like:
NOT-WE: Let’s just have a giant “150”!
FREEMAN: But what’s that got to do with Doctor Who?
NOT-WE: Doctor what?
FREEMAN: The thing the magazine’s about.
NOT-WE: Oh. I dunno. Isn’t the main character, like, 150 or something?
FREEMAN: No.
NOT-WE: Oh. Well, it’s our 150th issue so fans can just shove it. Let’s get some ice cream.
And shove it we did. Plus it was a bumper issue. They could’ve comprised the “150” out of small photos from the show, but instead, they threw some images of regular villains at the cover and pritt-sticked them down wherever they landed.
Yep, for its 150th issue, DWM had a rather rubbish cover. Yet… There’s something strangely wonderful about its laissez-faire approach, isn’t there? 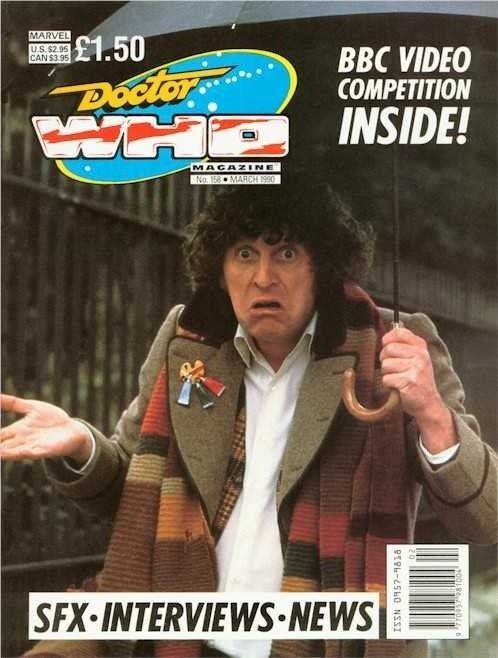 The year was 1990 and Doctor Who was in its prime. At least, it was when Survival aired, and then it got cancelled. You’d be forgiven for thinking there’d be a series of covers devoted to the pure evilness of Michael Grade or maybe images of the Seventh Doctor mid-rage scattered nonchalantly across a giant proclamation: “WE’RE REALLY RATHER ANNOYED AT THE STATE OF THINGS RIGHT NOW.”
Instead, we got Tom Baker holding up a brolly, shrugging as if to answer all your questions. These queries might include:

And this is the big one:

Still, the picture’s from the famous City of Death photoshoot in Paris, so most fans will presumably have framed it.
Other candidates from 1990 include: #161 (Patrick Troughton asking, “What’s the point anymore?”); #168 (Sylvester McCoy and Sophie Aldred asking, “What’s the point anymore?”); and #166 (Nicola Bryant asking, “Have you got the time, big boy?”). 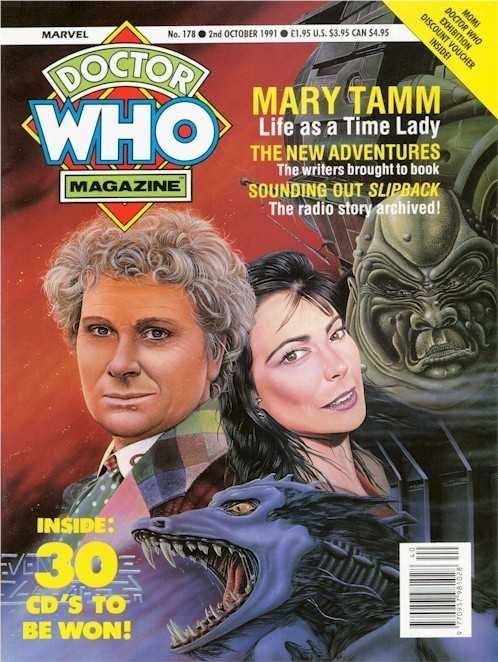 1991- 93 featured a glorious burst of art. Seriously, what awesome stuff! Cybermen and Daleks fighting in space! The Seven Doctors (twice)! A dinosaur that might’ve cacked itself! (Your honour, can the last remark please be stricken from the record?)
And then there’s #178, starring Auton versions of the Sixth Doctor and Peri. Or more specifically, Nicola Bryant off that #166 cover, propped up against Colin Baker who, thanks to a bit of mascara, is looking fab-u-lous. I never even realised Nicola’s teeth were that pointy. Hang on, it is Nicola, right? It’s not Camilla from State of Decay?
The pair are surrounded by monsters. They’re creatures from the Slipback, a radio drama I’ve not had the pleasure of listening to… but I do know the Target novelisation’s cover, and yep, you can certainly see parallels.
Colin Howard provided the art, and honestly, I’m making it sound worse than it is. Probably. Howard did the cover to a few DWMs as well as Classic Comics, so we know how brilliant he normally is. This time, however, he seems to have had a cheeky sip of Voxnick.
Get closer to the cover and you can see a banner pleading with readers’ parents. “MOM!” It says. “DOCTOR WHO EXHIBITION DISCOUNT VOUCHER INSIDE!” Isn’t that a bit patronising? But wait! There’s madness to this method! It was actually the “MOMI” exhibition, MOMI being the acronym for the Museum of Moving Images. Wow. Pictures that move. Will wonders never cease?
Still looks naff though. 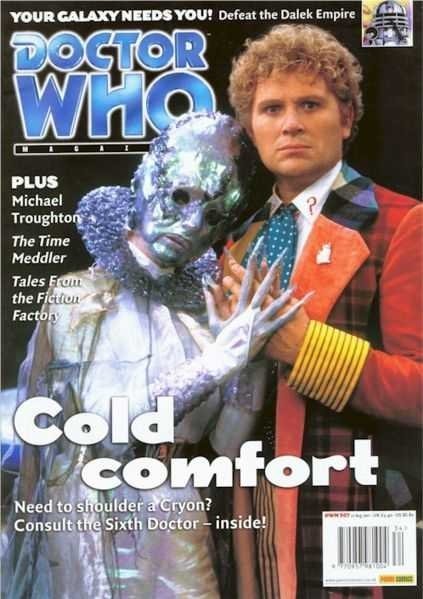 That’s right, there are a good 100-odd issues which get a pass. #266 nearly made it in here because I felt the “Dazed and Confused?” headline was a tad insulting to Sylvester McCoy (who looks like you’ve just asked him about quantitative easing) and fans alike, but it was pipped to the post, as things often are, by… the Cryons!
It’s an inverted-oasis of oddness in amongst a brilliant array of covers with dynamic compositions, stunning art, and beautifully cringe-worthy puns. I never felt Attack of the Cybermen was too violent until I assaulted a shop assistant after reading the tagline “Need to shoulder a Cryon?”
With the possible exceptions of #301 (Ken Dodd directing the Seventh Doctor to exit stage left), and #302 (WELCOME TO MY KANDY KITCHEN!), every issue that surrounds #307 could be displayed as Reasons Doctor Who Should Return To Telly. Zygons! Davros! The Devil! A Sontaran wearing Anne Robinson’s glasses! (Your honour, can that remark, too, be stricken from the record?)
But in July 2001, it must’ve been decidedly difficult to explain why the show is fantastic when the latest DWM showed a bubble-wrapped Faith Brown clinging to the nearest blonde.
The headline? “Cold Comfort.” Rough translation: “There’s no hope of Doctor Who returning, but we’ve got an article about Colin Baker. Chin up, eh?”
#99’s cover also starred a Cryon, fact buffs, but it was at least an awesome composition and made the silvery aliens kinda… cool? (Your honour, can we call it quits?)
Actually, the crew behind DWM 1989- 2004 need to be applauded for carrying the flame, for providing solace for a wealth of fans still pained by the heartless disregard shown to their favourite show by the BBC, but at the DWC, we’re as ruthless as they are on Varos, on Skaro, and in Ipswich. 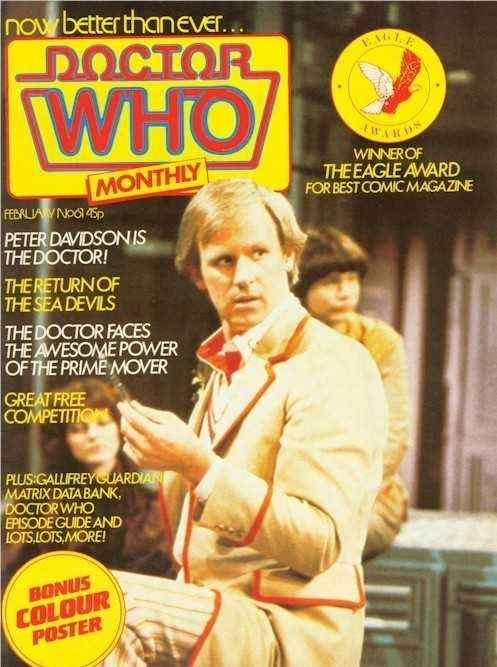 Yeah, I couldn’t go without mentioning this blooper; when announcing the latest incarnation of the Time Lord, DWM revealed:
“PETER DAVIDSON IS THE DOCTOR!”
They spelt his name wrong. Peter Davison reportedly attacked DWM personnel with a cricket bat. This was alongside the badge proclaiming DWM as “Winner of The Eagle Award for best comic magazine”, which was somewhat ironic. Mind you, the Fantastic Four had been advertised as that for many years and frankly, things went downhill once Willie Lumpkin was revealed to be Galactus. (Or was that just a dream?)
Join me again in Part Two, a segment I call “The Doctor likes his girls stupid.”

by Philip Bates time to read: 5 min
Features Top 10 Weird and Wonderful DWM Covers: Part Two
Features You Should Be Afraid
16
%d bloggers like this: